In The Night Swim, a new thriller from Megan Goldin, author of the “gripping and unforgettable” (Harlen Coben) The Escape Room, a true crime podcast host covering a controversial trial finds herself drawn deep into a small town’s dark past and a brutal crime that took place there years before. 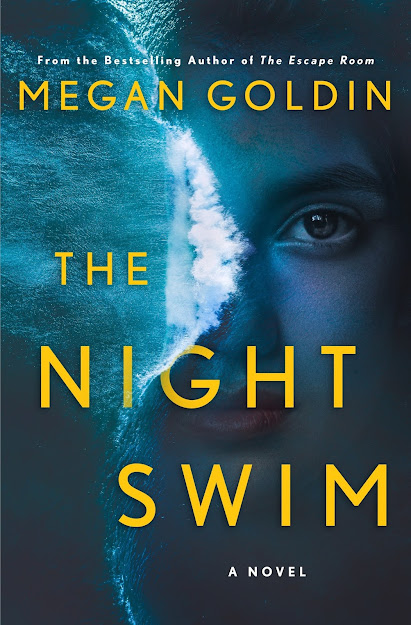 Ever since her true-crime podcast became an overnight sensation and set an innocent man free, Rachel Krall has become a household name—and the last hope for people seeking justice. But she’s used to being recognized for her voice, not her face. Which makes it all the more unsettling when she finds a note on her car windshield, addressed to her, begging for help.

The new season of Rachel's podcast has brought her to a small town being torn apart by a devastating rape trial. A local golden boy, a swimmer destined for Olympic greatness, has been accused of raping the beloved granddaughter of the police chief. Under pressure to make Season 3 a success, Rachel throws herself into her investigation—but the mysterious letters keep coming. Someone is following her, and she won’t stop until Rachel finds out what happened to her sister twenty-five years ago. Officially, Jenny Stills tragically drowned, but the letters insist she was murdered—and when Rachel starts asking questions, nobody in town wants to answer. The past and present start to collide as Rachel uncovers startling connections between the two cases—and a revelation that will change the course of the trial and the lives of everyone involved.

Electrifying and propulsive, The Night Swim asks: What is the price of a reputation? Can a small town ever right the wrongs of its past? And what really happened to Jenny?

Megan Goldin hooked me with The Escape Room, so I was excited to read The Night Swim. And let me tell you, this author doesn't disappoint. This one is definitely a page-turner and hard to put down. When I wasn't reading it, I was thinking about it, anxious to get back to reading. Some of the subject matter was hard to read, but the story is so compelling, it's equally hard to put down. Goldin certainly knows her stuff when it comes to building tension and keeping a reader on the edge of her seat - at least that's where this reader spent a fair amount of time. Even when I figured something out ahead of a reveal, I still thoroughly enjoyed that reveal. In fact, I thoroughly enjoyed the whole book. It's wonderfully written, gripping, and impossible to put down.

Excerpt from The Night Swim by Megan Goldin

Dear Rachel,
I hope you don’t mind me calling you by your first name. I feel that I know you so well.
She recoiled at the presumed intimacy of the letter. The last time she’d received fan mail in that sort of familiar tone, it was from a sexual sadist inviting her to pay a conjugal visit at his maximum-security prison.
Rachel climbed into the driver’s seat of her car and continued reading the note, which was written on paper torn from a spiral notebook.

I’m a huge fan, Rachel. I listened to every episode of your podcast. I truly believe that you are the only person who can help me. My sister Jenny was killed a long time ago. She was only sixteen. I’ve written to you twice to ask you to help me. I don’t know what I’ll do if you say no again.

Rachel turned to the last page. The letter was signed: Hannah. She had no recollection of getting Hannah’s letters, but that didn’t mean much. If letters had been sent, they would have gone to Pete or their intern, both of who vetted the flood of correspondence sent to the podcast email address. Occasionally Pete would forward a letter to Rachel to review personally.
In the early days of the podcast, Rachel had personally read all the requests for help that came from either family or friends frustrated at the lack of progress in their loved ones’ homicide investigations, or prisoners claiming innocence and begging Rachel to clear their names. She’d made a point of personally responding to each letter, usually after doing preliminary research, and often by including referrals to not-for-profit organizations that might help.
But as the requests grew exponentially, the emotional toll of desperate people begging Rachel for help overwhelmed her. She’d become the last hope of anyone who’d ever been let down by the justice system. Rachel discovered firsthand that there were a lot of them and they all wanted the same thing. They wanted Rachel to make their case the subject of the next season of her podcast, or at the very least, to use her considerable investigative skills to right their wrong.
Rachel hated that most of the time she could do nothing other than send empty words of consolation to desperate, broken people. The burden of their expectations became so crushing that Rachel almost abandoned the podcast. In the end, Pete took over reviewing all correspondence to protect Rachel and to give her time to research and report on her podcast stories.
The letter left on her windshield was the first to make it through Pete’s human firewall. This piqued Rachel’s interest, despite the nagging worry that made her double-lock her car door as she continued reading from behind the steering wheel.
It was Jenny’s death that killed my mother [the letter went on]. Killed her as good as if she’d been shot in the chest with a twelve-gauge shotgun.
Though it was late morning on a hot summer’s day and her car was heating up like an oven, Rachel felt a chill run through her.

I’ve spent my life running away from the memories. Hurting myself. And others. It took the trial in Neapolis to make me face up to my past. That is why I am writing to you, Rachel. Jenny’s killer will be there. In that town. Maybe in that courtroom. It’s time for justice to be done. You’re the only one who can help me deliver it.

The metallic crash of a minibus door being pushed open startled Rachel. She tossed the pages on the front passenger seat and hastily reversed out of the parking spot.
She was so engrossed in thinking about the letter and the mysterious way that it was delivered that she didn’t notice she had merged onto the highway and was speeding until she came out of her trancelike state and saw metal barricades whizzing past in a blur. She’d driven more than ten miles and couldn’t remember any of it. Rachel slowed down, and dialed Pete.
No answer. She put him on auto redial but gave up after the fourth attempt when he still hadn’t picked up. Ahead of her, the widening band of blue ocean on the horizon beckoned at the end of the long, flat stretch of highway. She was getting close to her destination.
Rachel looked into her rearview mirror and noticed a silver sedan on the road behind her. The license plate number looked familiar. Rachel could have sworn that she’d seen the same car before over the course of her long drive. She changed lanes. The sedan changed lanes and moved directly behind her. Rachel sped up. The car sped up. When she braked, the car did, too. Rachel dialed Pete again. Still no answer.
“Damn it, Pete.” She slammed her hands on the steering wheel.
The sedan pulled out and drove alongside her. Rachel turned her head to see the driver. The window was tinted and reflected the glare of the sun as the car sped ahead, weaving between lanes until it was lost in a sea of vehicles. Rachel slowed down as she entered traffic near a giant billboard on a grassy embankment that read: WELCOME TO NEAPOLIS. YOUR GATEWAY TO THE CRYSTAL COAST.
Neapolis was a three-hour drive north of Wilmington and well off the main interstate highway route. Rachel had never heard of the place until she’d chosen the upcoming trial there as the subject of the hotly anticipated third season of Guilty or Not Guilty.
She pulled to a stop at a red traffic light and turned on the car radio. It automatically tuned into a local station running a talkback slot in between playing old tracks of country music on a lazy Saturday morning. She surveyed the town through the glass of her dusty windshield. It had a charmless grit that she’d seen in a hundred other small towns she’d passed through over her thirty-two years. The same ubiquitous gas station signs. Fast-food stores with grimy windows. Tired shopping strips of run-down stores that had long ago lost the war with the malls.
“We have a caller on the line,” the radio host said, after the final notes of acoustic guitar had faded away. “What’s your name?”
“Dean.”
“What do you want to talk about today, Dean?”
“Everyone is so politically correct these days that nobody calls it as they see it. So I’m going to say it straight out. That trial next week is a disgrace.”
“Why do you say that?” asked the radio announcer.
“Because what the heck was that girl thinking!”
“You’re blaming the girl?”
“Hell yeah. It’s not right. A kid’s life is being ruined because a girl got drunk and did something dumb that she regretted afterward. We all regret stuff. Except we don’t try to get someone put in prison for our screw-ups.”
“The police and district attorney obviously think a crime has been committed if they’re bringing it to trial,” interrupted the host testily.
“Don’t get me wrong. I feel bad for her and all. Hell, I feel bad for everyone in this messed-up situation. But I especially feel bad for that Blair boy. Everything he worked for has gone up in smoke. And he ain’t even been found guilty yet. Fact is, this trial is a waste. It’s a waste of time. And it’s a waste of our taxes.”
“Jury selection might be over, but the trial hasn’t begun, Dean,” snapped the radio announcer. “There’s a jury of twelve fine citizens who will decide his guilt or innocence. It’s not up to us, or you, to decide.”
“Well, I sure hope that jury has their heads screwed on right, because there’s no way that anyone with a shred of good old-fashioned common sense will reach a guilty verdict. No way.”
The caller’s voice dropped out as the first notes of a hit country-western song hit the airwaves. The announcer’s voice rose over the music. “It’s just after eleven A.M. on what’s turning out to be a very humid Saturday morning in Neapolis. Everyone in town is talking about the Blair trial that starts next week. We’ll take more callers after this little tune.” 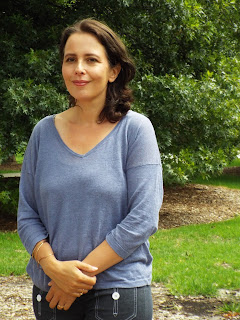 MEGAN GOLDIN worked as a correspondent for Reuters and other media outlets where she covered war, peace, international terrorism and financial meltdowns in the Middle East and Asia. She is now based in Melbourne, Australia where she raises three sons and is a foster mum to Labrador puppies learning to be guide dogs. The Escape Room was her debut novel.