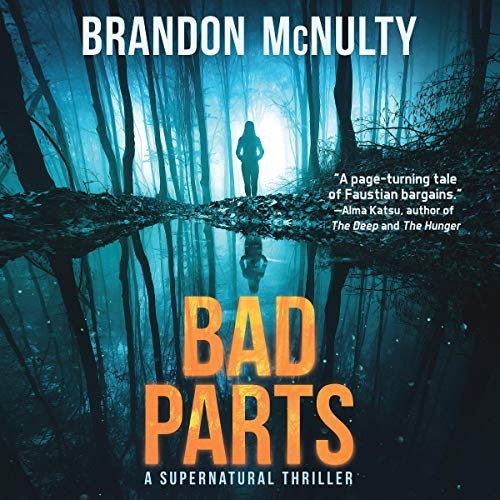 A town divided. A demon made whole.

When rock guitarist Ash Hudson suffers a career-ending hand injury, she seeks out the only thing that can heal it - her hometown's darkest secret.

For decades the residents of Hollow Hills, Pennsylvania, have offered their diseased and injured body parts to a creek demon named Snare. In return, Snare rewards its Traders with healthy replacement parts. There's only one catch: if Traders leave town, their new parts vanish forever.

Ash wants a new hand, but living in Hollow Hills isn't an option. Not when her band is one gig away from hitting the big time. Desperate, she bargains with Snare, promising to help the demon complete its organ collection in exchange for both a new hand and the freedom for everyone to leave town.

As her band's show rapidly approaches, Ash teams up with her estranged father in a last-ditch effort to recruit new Traders. But not everyone trusts Snare's offer, and Ash soon learns how far her neighbors will go to protect their precious parts.

With her family in danger and her band waiting, Ash must find a way to help Snare. But even if she succeeds, there's no telling what Snare plans to do with everyone's bad parts.

Momma Says: 2 stars⭐⭐
Bad Parts is just the kind of creepy story that works well for the Halloween season. It's a bit too far into cheesy territory but just the idea of the traders is chilling. Despite that, I had a few problems with this one. Parts of the story are drawn out while other parts move at a fast pace with lots of action, and the bounce back and forth is rather jarring. This story is loaded with possibilities, but it kind of feels like the author didn't know how he wanted it to go so he threw everything at us. Then we have a whole cast of characters who seem to be incapable of making a good decision. Seriously, not a single one is the type of character I'd want to root for. There is a turnaround for a couple of them late in the book, but it's too little, too late, especially after everything that has to happen for them to get to that point. It all comes together to make for a story that is convoluted and busier than it needed to be. Sometimes, less is more, and this book could've used a bit of that for a more effective story. Finally, there's the narrator, Ellie Gossage. Her voice works well for audio, and she does inject a good amount of excitement into the dialogue. It's the rest of the story that falls short because everything that wasn't dialogue sounded like a news reporter, reporting a story. It had that same tone and felt distanced from the story. In the end, Bad Parts was an okay story with promise, but the whole of it fell way short of the mark.
❃❃Audiobook provided by NetGalley and Midnight Point Press