✱✱Book Review✱✱ The Road Not Taken by Susan Rubin 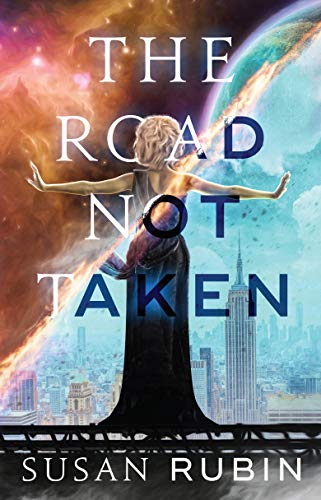 A woman suddenly widowed at 50,  left with money but no direction to her life, deep in transition from suburban housewife moves back to the West Village where she grew up. When she meets a woman who appears to be her identical twin, she discovers the Lost: a group of 100 fully-formed people dropped off on Earth as it cooled down they have lived on the planet as it developed the many species and geography of today.
The Lost show her the myriad dimensions of Spacetime, taking her to ancient Egypt, Weimar Germany, and planets without inhabitants, and reuniting her with loved ones she has lost to death. Through a casual affair with Osiris, god of Egypt, and her friendship with Vincent Van Gogh, she lives many truths that are new to her and learns who she needs to become to walk the road not taken.

Momma Says: 2 stars⭐⭐
Admittedly, The Road Not Taken is a bit out of my wheelhouse, but the idea of this woman visiting various times and places intrigued me. That said, I think the idea of this book was terrific, but the delivery fell short. The problem is that it all just felt like a little too much. I get the journey of self-discovery, but there was so much going on that it didn't feel like anything was properly fleshed out, including the characters. Maybe this one could've done with a few less visits so more time could be devoted to the others, or maybe the book just needed more attention to detail and more time with everything going on. Either way, that's not what I found here, and a lack of connection to both character and story was the result. I feel like there could've been a really good story here, and maybe I just missed it, but it didn't work for me.
❃❃ARC provided by NetGalley and Harvard Square Editions