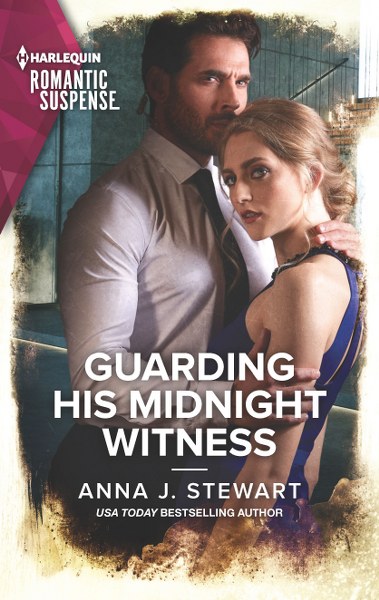 She knows what she saw…
Can he believe her?
Detective Jack McTavish can’t afford another slipup. So when artist Greta Renault claims to have witnessed a murder without a shred of evidence, he’s tempted to walk. Jack’s gut propels him to pursue this case—and his attraction to Greta. Soon, not only is his job on the line, but Greta’s life is, too…and only Jack can keep her safe.
USA TODAY Bestselling Author
Add to Goodreads
Amazon * Apple * B&N * Kobo * BooksAMillion * Harlequin * Target

Silence filled the space as the front door closed behind them. Impressive locks and security, Jack noticed. High-end marble extended across the expansive foyer. A large circular table sat in the center of the area, filled with a spray of flowers Versailles might appreciate. High ceilings, carved crown molding. Elegant and tasteful despite the odd trace of turpentine lingering in the air.

He headed for the stairs and ignored Bowie’s disappointed sigh. Jack hadn’t been burning up his treadmill every morning to take elevators. He wasn’t about to give anyone an excuse to doubt his fitness for the job. Not that Bowie, or any other officer he worked with in the Sac PD, would rat him out if Jack took the less stressful option.

“You hear from Cole and Eden?” Bowie asked as they rounded the second floor landing.

“Talked to Cole yesterday. They’ll be back next week.” Jack flinched as his chest twinged in protest, this time maybe not so imaginary. “Eden came across more evidence in that cold case she’s been chomping on and talked Cole into staying in Flagstaff a while longer.”

As much as Jack missed his partner, he was glad to be working this case without him. Even Cole had joined in the chorus of naysayers, suggesting Jack consider taking more time off.

When he pulled open the door to the fourth floor, his heart pounded heavy in his chest. He stepped aside to let Bowie pass and bent over for a moment to take a long, deep breath.

“Pull it together, man.” Jack gave himself a good shake and stepped into the hallway just as Bowie knocked on the only door in sight. It opened at Bowie’s touch and for an instant Jack wondered if Ms. Renault employed a ghost as a butler. “Hello?” Bowie called, his hand heading for the snap on his holster. Sweat broke out on Jack’s forehead. Instinct had him mirroring Bowie’s action even as his hand shook. He’d been caught off guard once—he wouldn’t let it happen again. “Miss Renault?”

“Come on in!” a voice from inside called.

The tension strangling Jack’s spine evaporated, and he patted Bowie on the shoulder as if he hadn’t been worried. “You spook too easy.” Jack sniffed the air. “No recreational smoking in here. Get ready to pay up.”

“You haven’t won yet,” Bowie mumbled and followed Jack inside.

“Miss Renault? Detective Jack...” Jack trailed off as he caught sight of the apparition moving toward them. Apparition seemed the only appropriate way to describe her, given the way Miss Renault glided across the room, light on her feet, dark silk pajamas flowing around bare feet. The deep V at the neck gave a hint as to lush, full breasts and creamy skin. Stark, silver-blond hair sat piled on top of her head, and she wore thick, black-rimmed glasses perched on her narrow nose. But her eyes, Jack thought. The eyes behind those glasses stole the breath from his lungs. Indigo. With sharp shards of gold that made him think of Van Gogh’s The Starry Night. She looked at him with those eyes now in a combination of irritation, suspicion and...interest?

“McTavish,” Bowie finished for him and elbowed him in the side. “Detective Jack McTavish.”

Jack pinched his lips tight and stepped forward right onto Bowie’s foot. The officer let out a whimper he attempted to cover with a cough.

“A pleasure. And it’s Greta, please.” She held out her free hand as her other held a stark white teapot, steam billowing from the spout. “I assumed when no one arrived shortly after I called...” She trailed off in much the way she had over the intercom. Her eyes glazed over just a bit, and she swayed.

“Ma’am?” Jack bolted closer, wondering if this wasn’t some sort of seizure disorder. Was it? She was still there, wasn’t she? “Greta?”

“Hmm?” She blinked, lifted her chin, and even in the dim light of her spacious loft, her cheeks exploded with color. “Oh, heavens! I’m sorry. I’ve been working, stuck, actually. You know, when you can’t figure out where...” She went quiet, turned around and disappeared around the corner, leaving the faint hint of jasmine and paint thinner in her wake.

“I’d like to amend the conditions of our bet.” Bowie moved in behind him. “I’m going with kooky.”

“Maybe.” Greta Renault certainly seemed unique, and unique had always fascinated him. Unique had also gotten him burned more times than he could count. He followed her as if in some kind of trance and found her, to his surprise, sitting cross-legged on her wide and deep kitchen island, doodling on a pad of paper. “Greta?”

“Uh-huh.” She held up a finger for a flash of a moment. A thin, embossed leather bracelet adorned her wrist. “Just a second. I had an idea, and I just...need...to...”

Her fingers flew across the paper as if they had wings. The sharp lead scraped in the silence, an oddly comforting sound that drew him closer. “Okay, yeah. Yes. This will work. Oh, this is perfect.” She tilted her head up and smiled at him, a smile so wide and joyous, his knees went week. “You, Detective Jack McTavish, are a lifesaver. Definitely an inspiration. One look at you and bam!” She smacked her palm against the side of her head. “The ideas are flowing again. Thank you.”

“My pleasure.” Jack looked at Bowie as the deputy circled the kitchen and scanned the countertops, no doubt looking for medications or drug paraphernalia. Jack didn’t see a trace of anything in the room other than utter and complete organization. Not even a stray toast crumb to be found.

Greta hopped off the island and poured herself a cup of dark, aromatic tea. Nope, Jack told himself as he finished his coffee, kooky definitely wasn’t a bad thing. But he was here for a reason; a reason he was going to have to report back on soon. Which meant he didn’t have time to be entertained. “Greta, I don’t mean to be rude, but why did you call the police?”

“The police?” Her face clouded, her smile dipped.

“You called 9-1-1 at just after eleven.” Bowie clarified as he glanced at his notebook.

“Oh, right.” Her eyes flashed and cleared. “The murder.”

“The murder.” Whatever he’d been expecting to hear, that wasn’t it. Jack leaned an arm on the counter and kept his tone even as he saw Bowie roll his eyes so hard they should have fallen back into his skull. “You witnessed a murder?”

“Mmm-hmm.” When she nodded, a strand of long, silver-blond hair fell over one eye. “I was afraid when you didn’t arrive, I might have...” She trailed off again, pushed the unspoken thought along with her hair away. “Never mind.”

“Where was this murder exactly?”

Jack straightened at the strained patience in his deputy’s voice.

“Across the street. In that new building.” She sipped her tea. “I can show you.” She set her cup down and floated out of the kitchen before either of them could respond.

She reminded him of a sprite, Jack thought. Or perhaps a siren. He had the sneaking suspicion she could lure him into the afterlife and he’d gladly follow. And that, he told himself, would be a very bad idea.

USA Today and national bestselling author Anna J Stewart can't remember a time she didn't have a book in her hands or a story in her head. Early obsessions with Star Wars, Star Trek, and Wonder Woman set her on the path to creating sweet to sexy pulse-pounding romances for her independent heroines. Anna lives in Northern California where she deals with a serious Supernatural addiction and an overly affectionate cat named Snickers.
Website * Facebook * Twitter * Instagram * Bookbub * Amazon * Goodreads

Follow the tour HERE for special content and a giveaway!
$15 Amazon Gift Card – 1 winner
Digital sets of the original Honor Bound Trilogy
(MORE THAN A LAWMAN, REUNITED WITH THE PI, GONE IN THE NIGHT
- 3 winners, their choice of ePub or Mobi)
a Rafflecopter giveaway