The Terrors of Gehenna in a Steampunk World

My magician protagonist, Leopold Kazsmer, in my latest gaslamp fantasy/steampunk adventure, CLOCKWORK GYPSY, is of Jewish/Gypsy blood and he’s ashamed of that heritage. Neither of those bloodlines was anything to trumpet in Victorian England. But as the series go on, he learns to have an appreciation for both.

He learned from his father how to summon helpful Jewish daemons, like his friend Eurynomos, a terrifying aspect of a beast with tall horns, talons, and wearing nothing but a breechclout…who also has a cultured West End accent and is soft-spoken when dealing with his human friend. As Prince of Death, he dwells in Gehenna, a multi-layered afterlife in the Jewish tradition.

But what is this place that so terrifies Leopold, and where his father—whom he thought dead, his life sacrificed to save Leopold when he was a child—may have been trapped these seventeen years?

Gehenna. Originally the word referred to a valley west of Jerusalem because it was the ancient place of pagan sacrifice and eventually became synonymous with evil. In Jewish tradition, there is no Hell as the New Testament describes, a place of eternal torment for dead souls. The rabbis of later periods even decried a place of eternal suffering for a finite life, but Gehenna is described as having five different kinds of fire, including areas of alternating fire and ice. Some passages intimate that the torments of Gehenna will last until the final judgment, while others say that the truly evil will be completely eradicated by the fires into non-existence.

That’s quite a lot of terror and discrepancy for a place only mentioned in the Hebrew Scriptures (Old Testament) three places; in Daniel and I Enoch and II Enoch.

Not unlike Dante’s Hell, there are said to be levels to Gehenna: Sheol (the Grave, where everyone ends up but not necessarily tormented), Abaddon (Destruction), Beer Shachat (Well of Destruction where the “ten wicked nations” end up), Bor Sh’on (Pit of Turmoil), Tit ha-Yeven (Slurried Clay, where slanderers, heretics, traitors, and bribe-takers go), Domah (Silence), and Tevel (possibly the Earthly Garden of Eden).

But there is also Sitra Achra (the Other Side) that stands as a supporting pillar directly in the middle if you think of the seven layers of Gehenna as a giant tent around it. Sitra Achra is the place from which all evil emanates and all who are truly evil go. And this is the place that Leopold’s father is reportedly trapped.

It’s not easy being a magician with real powers with friendly daemons who hide the truth from you, only to spare your feelings. Of course, there is more to the story than that—a plutocratic community of goblins, scary faeries, and the Clockwork Gypsy himself bent on Leopold’s destruction, a ghost, an imp, and a living automaton, all wrapped up in a steampunky Victorian London. Spooky. 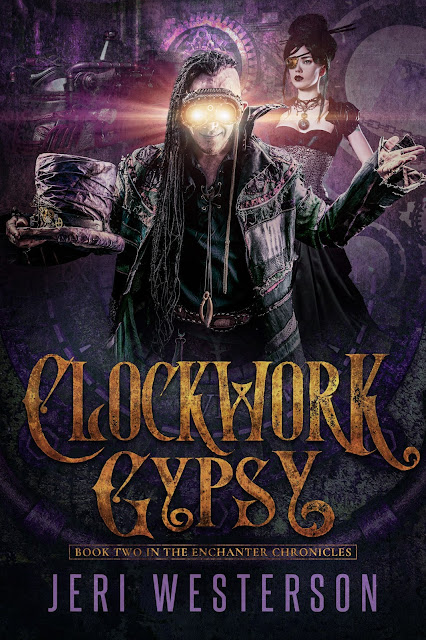 A diabolical plot is afoot to kill thousands by connecting England’s railway lines to a deadly curse. The beautiful and mysterious Mingli Zhao, Special Inspector from Scotland Yard, enlists the help of Leopold Kazsmer, the Great Enchanter, who uses his skills with summoning Jewish daemons to perform true magic to help solve supernatural crimes. Meanwhile, a Hungarian Romani—part man, part clockwork—will stop at nothing to kill the man he believes is responsible for his Hell of an existence that is slowly grinding his mind into the nothingness of gears and pistons. It’s a race against time for Leopold to foil the fiendish plot of the railway barons, fight off a plutocratic society of goblins, struggle to gain the romantic attentions of Miss Zhao…and discover the identity of the Clockwork Gypsy before he kills again.
Amazon 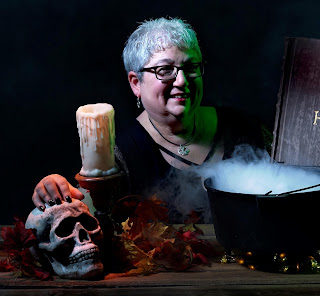 Los Angeles native JERI WESTERSON is the author of historical novels and fourteen Crispin Guest Medieval Noir Mystery novels, a series nominated for thirteen national awards from the Agatha to the Shamus. Jeri also writes the Enchanter Chronicles, a historical fantasy/steampunk mystery series, the latest of which is CLOCKWORK GYPSY and releases, appropriately enough, on Halloween. Both THE DAEMON DEVICE and CLOCKWORK GYPSY ebooks are 99 cents! See her other books—medieval mysteries, historical fiction, paranormal books, and an LGBT mystery series—at JeriWesterson.com