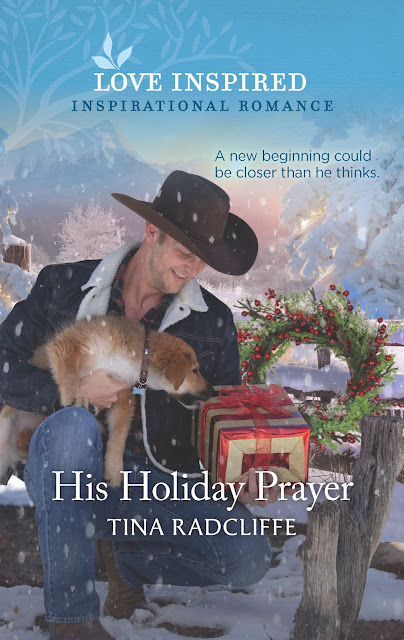 A new beginning could be closer than he thinks. What he wants for Christmas may not be what he needs. After receiving an unexpected job offer in Texas, widower Tucker Rainbolt decides he and his twins need a fresh start. But moving on means leaving his best friend, Jena Harper, and their vet clinic behind. For the first time, Tucker sees Jena as more than a buddy. What if leaving isn’t the answer? Maybe what he’s been missing has been right beside him the whole time…From Harlequin Love Inspired: Uplifting stories of faith, forgiveness and hope.

Momma Says: 4 stars⭐⭐⭐⭐
His Holiday Prayer is perfect for this crazy year we've been having. Not only are we coming up on the holidays, but 2020 hasn't exactly been a normal year for anyone. This inspirational friends to lovers romance is just what we need to remind us to keep pushing on and to have hope. I'll admit that I wasn't sure about this one when I realized that Tucker is a widower, especially with being recently widowed myself. But the more I read, the more this story and its characters pulled me right in. Whether you can relate to Tucker's circumstances or not, this one will hit you right in the feels. The characters are likable, the story is engaging, and now that I've met Tucker Rainbolt, I'm definitely going to be checking out the earlier books in the series.
🞿🞿🞿🞿🞿

Excerpt for HIS HOLIDAY PRAYER by Tina Radcliffe (Love Inspired)

“Looking good, Muffin.” Jena Harper examined the suture line on the English bulldog, then removed her gloves with a snap. She gave the dog a gentle massage behind the ears before turning her over to the clinic technician.

“No, her incision looks great. Give the Tuttles a call and let them know their princess is ready to pick up.” Jena glanced at the clock. “Remind them that the clinic closes early on Saturdays.”

“Thanks, Pilar. And thank you for working overtime until we find a second tech,” Jena said.

“No problem, Doc. Mind if I take off after I call? My son has a scout meeting.”

“Go ahead, and have a great rest of the weekend.” Jena headed to the sink, scrubbed her hands and rinsed them before pushing through the swinging door to the staff area where her partner at Rebel Vet and Rescue, Tucker Rainbolt, stood at the counter in the file room, documenting in a patient chart.

“Thanks for handling those last few appointments, Tucker,” she said.

He yawned and ran a hand through short, caramel-colored hair. “That’s what I’m here for.”

“Yes, but you already put in the entire morning out at Rebel Ranch treating that stallion.”

“Small animals are a nice change of pace from the equine clinic. Hopefully Monday and Tuesday will be quiet for you, since I won’t be around to help.”

“Ah, yes. You’re headed to Texas.” She shook her head. “Explain to me why you’d want to speak at a university whose football team annihilated us this year?”

Tucker chuckled. “Life is not just about animals and Oklahoma State football, Jena.”

She opened her lab coat to show off her OSU Cowboys black-and-orange sweatshirt, which managed to be both gaudy and tacky. “Says who?”

He stopped writing and looked at her. “You never cease to amaze me.”

“I consider that a compliment.”

“Don’t you ever feel a little stifled in Rebel?” he asked.

“No. I love this town.” Rebel was idyllic. Small enough that you knew nearly everyone’s name. Then from Memorial Day to Labor Day, the population swelled with tourists. There was always something going on thanks to nearby Rebel Lake and Keystone Lake. Yes, Rebel, Oklahoma, was pretty much perfect.

“Hmm,” Tucker murmured. “I guess the difference is that you don’t have two older brothers who hover over you at every turn.”

“You have a supportive family who are concerned about your well-being. You’re very fortunate.” Tucker had no clue what it was like to have zero family, and she prayed he’d never know that feeling of being alone in the world.

“Yeah. Extremely fortunate,” Tucker agreed. “But all that concern comes at a price.” He released a slow breath.

“I’ll forever be the little brother. Even more so since we lost Levi and Megan.”

Jena grimaced. It hadn’t been her intention to bring up memories of those dark times when Tucker lost both his wife and his younger brother in separate incidents but so close together.

“It’s not their fault,” he said. “And it is getting better since both Reece and Mitch got married. Eventually, the folks in this town will ease off, too.”

“Jena, the pastor’s wife will pick up her dog shortly. When she does, she’ll bring me a casserole. The woman has had my name on her outreach calendar for over four years, since Megan passed. When I suggest removing me, she won’t hear of it. Ridiculous, but there it is.”

“Oh, wow. I had no idea. And I feel like a jerk of a friend for not noticing. I’m sorry, Tucker.”

“Don’t apologize. You’re the only one who doesn’t treat me with kid gloves.”

She chuckled. “No, I can’t say that I do.” Often the two of them had running disagreements about all sorts of things. She definitely had no fear of telling him the truth about…pretty much everything. That’s what made them such good friends. They could and did talk.

“Sometimes, I wonder if maybe there’s something else out there for me.” Tucker stared through the storefront window of the clinic as though he was a million miles away from Rebel.

Panic gripped Jena around the middle as the reality of his words sank in. “You’re not thinking of leaving Rebel, are you?”

“Not at the moment.”

When the front door bells chimed, they both turned toward the sound.

Tucker followed Jena to the reception area just in time to see Saylor Tuttle sashay through the doggie entrance, holding a foil-covered pan and bringing with her the unmistakable scents of gardenia perfume and tomato sauce, along with a chilly late October breeze.

“Tucker,” she said. “So glad you’re still here.” The pastor’s wife slid the casserole onto the counter and then patted her sky-high, silver bouffant hair.

Turning slightly toward Jena, Tucker raised his brows with a ‘see what I mean’ expression.

“Thank you, Mrs. Tuttle.” He smiled. “You know you can take me off the list any time now, right?”

“Nonsense. It’s an honor for the ladies’ outreach to assist you during this difficult time.”

“Muffin is healing nicely,” Jena said to Mrs. Tuttle. “Keep the E-collar on to prevent her from messing with the incision line and continue cleaning the area as you have been.”

The older woman leaned across the counter. “You know, honey, if you’d marry him, I could take him off my calendar.”

“Excuse me?” Jena inched away from the desk, eyes rounding as she processed the woman’s words. “Are you talking about Tucker?”

“Who else? He’s a catch and you’re the most likely candidate.”

Jena took a breath. It wouldn’t do to insult the pastor’s wife, so she measured her response. “Tucker and I are friends. We went to college together and started the clinic together. I’m the twins’ godmother.” She raised a hand, then lowered it to the counter, still stunned. Never in a couple zillion years would she ruin their friendship and their professional bond by crossing that line.

Tina Radcliffe has been dreaming and scribbling for years. Originally from Western NY, she left home for a tour of duty with the Army Security Agency stationed in Augsburg, Germany, and ended up in Tulsa, Oklahoma.  Her past careers include: Certified Oncology R.N. and library cataloger.  She recently moved from Denver, Colorado, to the Phoenix, Arizona area, where she writes heartwarming and fun inspirational romance.