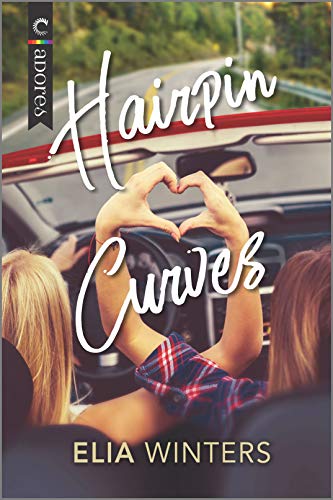 Megan Harris had hopes of seeing the world, but at twenty-five she’s never even left Florida. Now a wedding invitation lures her to Quebec…in February. When her ex-friend Scarlett offers to be her plus-one (yeah, that’s a whole story) and suggests they turn the journey into an epic road trip, Megan reluctantly agrees to the biggest adventure of her life.

A week together in a car is a surefire way to kill a crush, and Scarlett Andrews has had a big one on Megan for years. The important thing is fixing their friendship.

As the miles roll away, what starts as harmless road-trip games and rest-stop dares escalates into something like intimacy. And when a surprise snowstorm forces Megan and Scarlett to hunker down without the open road as distraction, they’ve got a bigger challenge than making it to the church on time: facing the true nature of their feelings for each other.

Momma Says: 3 stars⭐⭐⭐
Hairpin Curves was a smack in the middle of the road read for me, and the thing is a lot of the reasons I really liked it were also part of the reason for that meh feeling. It's a friends to enemies to lovers romance, which I like. There's also a bit of forced proximity. Either or both of those can make for an engaging romance, and the fire those tropes can generate between characters can lead to some pretty good heat and chemistry. The problem is that these two are almost apathetic toward each other. They exchange a few barbs here and there, and they're not friendly toward each other, but it's not enough to explain them not speaking for so long or to generate that earlier mentioned heat. The dialogue between them feels more like that of acquaintances rather than friends who fell out, which may be what the author was going for in the beginning, but that didn't give me reason to be invested in the relationship. That brings me to why they even went on a road trip together in the first place. It just doesn't feel believable after Megan and Scarlett going so long without a word, plus Scarlett doesn't seem to have the best motives when she's planning how to wrangle a road trip out of Megan since she can't afford to fly to the wedding.
All of that aside, my main problem with this book is the slow pacing. That's not to be confused with a slow burn romance because when that's done right, the anticipation builds until the characters finally figure it out. This isn't that. It may be what was intended, but the first half of the story lags enough that it never quite builds enough momentum to make it the page turner I was hoping for. Things do pick up in the second half, and I started to feel like this could be a couple worth rooting for. It's also pretty low angst, and that along with the pick up in pace saved this story for me.
I was really hoping for a better reaction to this book. I feel like female/female romance doesn't get nearly the exposure of male/male, male/female, or any other variation. This one does have its moments and parts of it, especially in the second half, have that something in a romance that grabs and holds my attention, but everything combined made this one just an okay read for me.
❃❃ARC provided by NetGalley and Carina Press