✱✱Book Review✱✱ Blog Tour: A SOLDIER UNDER HER TREE by Kathy Douglass 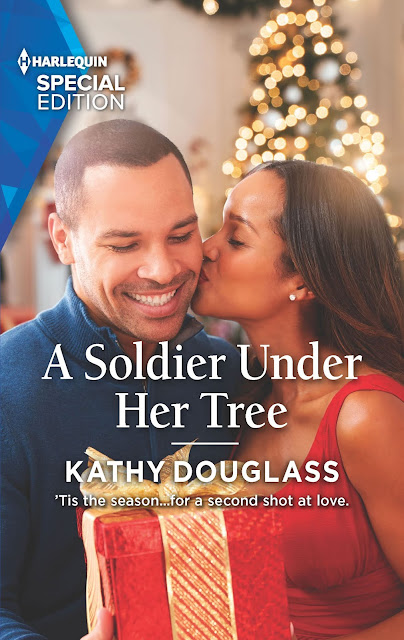 Tis the season…for a second shot at love. Could a fake boyfriend be her real hero this Christmas?

When her ex-fiancé shows up at her shop—engaged to her sister!—dress designer Hannah Carpenter doesn’t know what to do. Especially when her former fling Russell Danielson sees her plight and rides to the rescue, offering a fake relationship to foil her rude relations. The thing is, there’s nothing fake about his kiss… But when things get real, will the sexy soldier once again stop short of commitment?

Momma Says: 4 stars⭐⭐⭐⭐
It seems like there's a run on fake relationship romances lately, and the situations run the gamut. That said, the situation here has been done a few times with varying degrees of success, and it works pretty well with the Christmastime setting. I mean, who wouldn't want a sexy soldier under their tree? Russell and Hannah are likable characters, both together and separately, and they both have things to work through. They're genuinely good people, and the attraction and chemistry between them just feel right. This one is a quick read, but it doesn't lack in sweetness. It also works well as a standalone even with it being so far into the series. As far as the fake relationship trope is concerned, I'd have to say that this specific circumstance may have seemed tired, but the Christmas theme seems to have breathed new life into it. All in all, A Soldier Under Her Tree is a sweet romance that just leaves you feeling good.

A SOLDIER UNDER HER TREE by Kathy Douglass

“Why do you have to be like that? I tried to resist. We both did, for your sake. That’s why we didn’t get married right away. We were considering your feelings. But Gerald and I are in love and want to be together.”

Hannah managed not to throw up the yogurt she’d grabbed for breakfast. Respect for her feelings wasn’t the reason Dinah and Gerald hadn’t gotten married three years ago. They hadn’t tied the knot because Dinah hadn’t been divorced yet. Her ex-husband hadn’t been in the mood to give her half of what he’d earned, so the proceedings had dragged on and on. Of course, had Dinah been as much in love with Gerald as she’d claimed, she would have just walked away from her then eight-month marriage and a huge settlement. But Dinah had absorbed their mother’s teaching quite well. Never leave a dollar behind.

“I’m not stopping you. Get married. Have the biggest wedding the state of Virginia has seen. Heck, all of America has seen. But leave me out of it.”

Gerald stepped forward then. Hannah had hoped to never see the weasel ever again. Yet here he was, standing right in front of her. He was average height with hair that was beginning to thin and cold, calculating eyes. Hannah wondered what she’d ever seen in him. When they’d worked together at his father’s architectural firm, she’d been impressed by what she’d interpreted as his drive and desire to make a name for himself. Now she realized that had just been a mirage.

“Hannah, we weren’t right for each other.” Was he trying to sound sympathetic? If so, he was failing miserably. But then, true feelings weren’t included in his limited repertoire. “I know you feel the same way.”

“You got that right.”

“I know you’re hurt and disappointed,” he said as if he hadn’t heard a word she’d said. Apparently he’d prepared this speech and intended to recite every word of it. “But don’t hold it against Dinah.”

“You’re unbelievable. Please, all of you, just leave.”

“Not until you agree to make my dress,” Dinah said. Clearly trying to make nice was putting a strain on her and she was reverting to type.

Hannah had a business to run. A customer could come in at any moment. She needed to put an end to this now.

“You know, I can always call the chief of police. He’s a friend, too.”

“You wouldn’t dare,” Eleanor said indignantly, pressing a manicured hand against her chest.

“Actually I would,” Hannah said, hoping her mother wouldn’t call her bluff. Hannah didn’t want anyone in town, especially her friends, to know about her messed up family. She’d never told a soul about them or how Gerald had betrayed her. And she never would. But Eleanor didn’t know that.

“There’s no need for that,” Eleanor said hastily, trying to get back on script. “Hannah, just consider what’s best for the family. And for you.”

“How would it look if you, a successful dress designer to the stars, refuse to design a wedding dress for your only sister? It could harm your reputation if anyone ever found out how petty you’re being,” Dinah added.

“Was that a threat? That’s an interesting strategy for someone asking a favor.”

“I’m just pointing out the obvious. You like to pretend that you’re the victim. Poor betrayed Hannah. The truth is Gerald dumped you because he didn’t want you. He wanted me.” Dinah preened as if she were some sort of prize. “You’ve always been jealous of my beauty. I would have thought you’d gotten over it by now. Maybe if you could find a man, you wouldn’t be so bitter. But then, maybe you haven’t met anyone desperate enough.”

Hannah gasped. That was low even for Dinah.

The sound of a throat being loudly cleared filled the uneasy silence. Hannah closed her eyes.

Just what she’d hoped to avoid—a witness to her family’s dysfunction and her personal humiliation.

She opened her eyes and turned to face her customer.

Russell Danielson. Her good friend’s brother. She’d met Russell this past summer when he’d been in Sweet Briar visiting his siblings and their families. They’d hit it off and spent a glorious evening together. He’d promised to contact her when he got back to his duty station. He hadn’t.

She’d been hurt when he’d ghosted her—disappointed even—but not surprised. She was still down on men. Besides, though they’d had a couple of good conversations, those talks hadn’t involved anything truly personal. Still, she’d thought they’d connected. Clearly she’d been wrong.

Russell looked around the room, taking in the scene, and then smiled. Did he find the way she was standing against the wall while they circled her like sharks amusing? “Sorry I’m late.”

“Uh.” Late for what? Until he’d stepped into her store, she hadn’t known he was in town.

He crossed the room, not stopping until he was standing an inch in front on her. Instinctively she inhaled and got a whiff of his delectable scent. He was wearing a woodsy cologne, which when mingled with his natural scent made her weak in the knees. Before she could utter a word, he put his arms around her waist and pulled her into a kiss.

His lips were warm, and the pressure was perfect. He lingered for a few seconds before pulling away. Though he’d ended the kiss, he kept his arm firmly around her waist, which was good since her knees had turned to Jell-O.

Kathy Douglass came by her love of reading naturally - both of her parents were readers. She would finish one book and pick up another. Then she attended law school and traded romances for legal opinions. After the birth of her two children, her love of reading turned into a love of writing. Kathy now spends her days writing the small town contemporary novels she enjoys reading. Kathy loves to hear from her readers and can be found on Facebook.