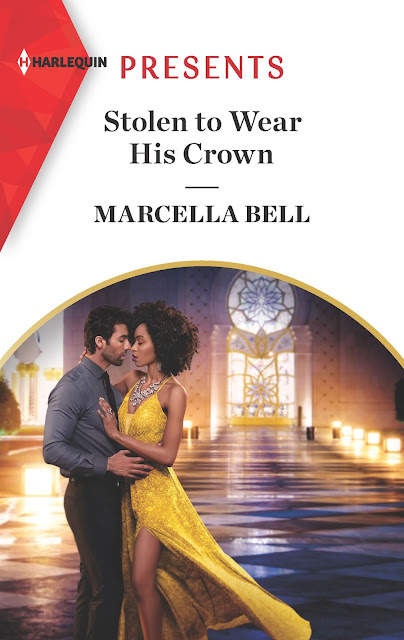 From Harlequin Presents: Escape to exotic locations where passion knows no bounds.

The Queen’s Guard, Book 1: Stolen to Wear His Crown

From unworldly scientist… to his fearless queen!

Mina has finally achieved her dream of becoming chief scientific advisor of Cyrano, when she’s stolen from the interview room! She’s taken directly to the palace chapel, where the terms of a secret betrothal mean she must marry the king—immediately. Powerful King Zayn knows all too well monarchs can’t afford dangerous distractions like love. Yet still, he’s appalled to be wed to a complete stranger! Mina is altogether too sensitive, too scholarly, too unpolished to be queen. But that can’t stop the desire that flares each time she looks his way…

Momma Says: 3 stars⭐⭐⭐
The title pretty much says it all when it comes to the trope of this one, which can be a bit of a hit or miss for me. Stolen to Wear His Crown lands somewhere in the middle, which is probably more me than the story. While I certainly would've preferred a better way for Mina to be stolen (literally, she's snatched right up), it does work to get things moving and propel the story along. The romance is... well, it's romance, and the couple does have chemistry. But what I enjoyed more was the way these opposites figured things out and learned their roles as royalty. The book is well written and overall, a pretty good start for the series.

STOLEN TO WEAR HIS CROWN by Marcella Bell Excerpt

Mina Aldaba smoothed her palms over her hair as she took a deep breath. The motion wouldn’t do anything against the strength and determination of her curls to frizz—even if there was enough moisture in her palms to give it some hold—but it felt purposeful. On the other side of the ornately carved door in front of her sat the men and women of Parliament—the people whose decision would dictate whether or not she finally kept her promise to her father.

Like her hair, she was determined and untamable. She had done everything she could, with a full heart and to the very best of her ability—and that had carried her to this side of the door, inches away from the chance to achieve everything she had ever wanted.

The rest was up to the men and women inside.

The thought set off a series of stuttering palpitations in her chest—and not the kind that could ever be confused with excitement.

This next part was up to fate. The only thing she could do was be herself, trust her knowledge, and hope that that would carry her through. Unfortunately, faith wasn’t one of her stronger virtues. She hadn’t gotten to this side of the door by wishing. She’d done it by force of will and desire, continuous studying and practice, so she would be ready to deliver when the opportunity came.

Now was that opportunity.

She could steel her spine even if she couldn’t calm her stomach.

She wore her usual black pantsuit and white blouse. Selecting one size up and choosing a square cut lent her hyper-feminine figure some much-needed gravitas. The hard lines of the design concealed any hint of curve—which she appreciated, given her very round derrière and rather Rubenesque chest. Dressing her figure for academia—or, more accurately, concealing her figure for academia—was a challenge that she hadn’t anticipated when she’d decided to become a scientist at twelve years old.

Still, one had to accept what one had.

She would never forget the day a female colleague had taken her aside about it, though.

“You’re going to have to do something about all of that.”

Her fellow doctoral candidate had spoken blithely as she’d gestured in a vague circle toward Mina’s jeans-clad rear and her breasts with a long red fingernail.

At the time, the words had stung, but Mina was grateful for them. Her colleague had been right. The thin old uni sweatshirt she’d been wearing that day had stretched across her full chest, and her jeans had been form-fitted.

She’d looked like the student she had always been, rather than the professional academic she was becoming, and the world she’d been about to enter was cutthroat, old-fashioned, and antagonistic—especially if you happened to have been born with female anatomy.

As soon as she had transformed her attire, her work had begun to garner more attention. Her male colleagues, it appeared, had been able to focus on it, rather than her.

Thankfully, she had mastered those ropes long ago—so well, in fact, that she was now in line to reap the highest professional reward: an interview for the appointment of an adviser to the King of Cyrano.

In preparation, her dense chocolate-brown curls had been ruthlessly brushed back from her face, heavily gelled, and confined into a thick French braid. Today—a day in which when she couldn’t afford to have even a single hair out of place—she had used nearly double the amount of product to tame the springy, indomitable mass.

She had learned long ago to avoid putting her hair in a bun. Too many academics harbored sexy librarian fantasies.

The combination of the suit and the braid created a no-nonsense image—that of a serious academic. It was precisely what Mina wanted to project. Especially since she was the youngest candidate ever to sit for a parliamentary interview—and only the second woman ever nominated.

The door cracked open, and a page popped his perfectly coiffed head out.

Marcella Bell lives in the mostly-sunny wilds of Southern Oregon with her husband, children, father, and three mismatched mutts. The dry hot summers and four distinct annual seasons of the region are a far cry from the weird rainy streets of Portland, OR, where she grew up, but she wouldn’t trade her quirky mountain valley home for anyplace else on the earth. As a late bloomer and a yogini, Marcella is drawn to romance that showcases love’s incredible power to transform.