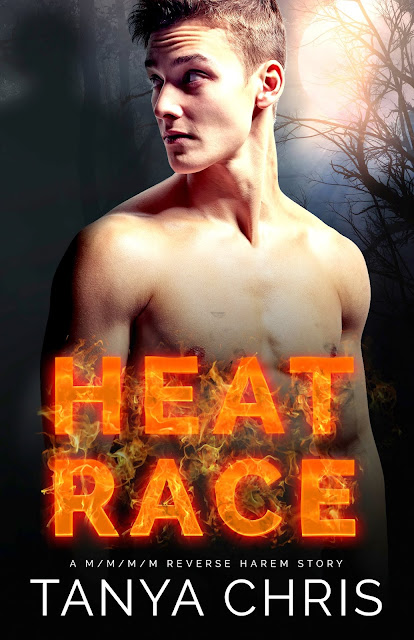 It’s been two hundred years since alphas could knot and omegas could get pregnant, since anyone has shifted. Today’s hybrids are more human than wolf, but there’s one tradition they’ve retained from their animal ancestry: the heat race. With omegas in short supply, the annual heat race is every alpha’s chance to catch and claim an omega.
Jack Henry stands at the starting line, undecided. He could conspire to be caught by his best friend and childhood sweetheart, Elias, but would Elias be alpha enough for him? Maybe he’d prefer to be claimed by Saul, the huge and handsome alpha he’s always had a crush on. Then Jasper shows up—a stranger dressed in leather who emits such strong alpha vibes Jack Henry is ready to give himself up before the race even begins. But Jasper’s an unknown entity, whose confidence might be indicative of a desire to control.
Jack Henry can’t decide, and so he runs, turning his fate over to fate itself as he’s pursued by all three of his suitors plus the one alpha he can’t abide—Lon, a violent and regressive man who won’t take no for an answer. Jack Henry is going to need more than one alpha to keep him safe. And to keep him satisfied.
During a long night of danger and triumph, the Treehouse Pack is formed. But beyond the heat race lies an uncertain future. Jack Henry, Elias, Saul, and Jasper might each face their own insecurities, fight their own fights, and find their place in the pack as they navigate uncharted waters together. Because it turns out that legendary abilities like knotting, shifting, and child bearing might be more than just relics of the past.
Heat Race is a full-length M/M/M/M reverse harem omegaverse story, separate from the Omega Reimagined world.
Universal Amazon link: http://mybook.to/heatrace
BookBub: https://www.bookbub.com/books/heat-race-by-tanya-chris
Goodreads: https://www.goodreads.com/book/show/55952853-heat-race

Momma Says: 4 stars⭐⭐⭐⭐
The great thing about omegaverse is it's complete and total fantasy but darned if it isn't all kinds of steamy fun. In this case, it's a Heat Race for a mate, and omega Jack Henry finds more than he bargained for in all the best ways. I really like how Tanya Chris explores so many different dynamics between alphas and omegas in her omegaverse books, and this time, we get a bit of this and a bit of that with four terrific characters and a #WhyChoose romance. This quartet does have some growing pains to work through, and of course, they have some opposition as they set up house - opposition that means a touch of danger for this newly formed family. Each character brings something different to the relationship as well as each having their own issues as they adjust to the arrangement. I really hadn't thought about this trope set in omegaverse, but Tanya Chris makes it work, and it's thoroughly entertaining. The characters are lovable, the romance is sexy, and the story is fast-paced and engaging. All in all, another great omegaverse read by this author.

“You really do have to make a choice,” Saul told Jack Henry as he got the rest of the way undressed. It felt good to be naked. The clothes had become too much—a civilized veneer covering something that was no longer civil. “If you don’t speak up, one of us is going to go too far. And I don’t want it to be me.”

“Me either,” Elias said. “I want to respect your right to choose, but it needs to be soon.”

Jasper rose to his feet so the three of them surrounded the omega. Jack Henry turned in the center of the triangle they made, surveying them. He looked pleased, neither scared or uncertain, the only one of them still dressed but as lost to the call of the moon as any of them.

“Make a choice,” Saul begged him. “Because this is getting…” Difficult, tense, uncomfortable. Hard. So hard. Saul massaged his cock, unable to resist its insistence any longer.

Jack Henry kept rotating. Every time he faced Saul, Saul felt the heat of his eyes. Jack Henry wanted him, had always wanted him. Saul knew it, but Jack Henry didn’t say it. What he said was, “I don’t wanna.”

Jack Henry shook his head, still revolving slowly, his eyes and teeth gleaming. “There is no best. I couldn’t decide before the race, and I can’t decide now. Jasper’s my bad boy, so ruthless and feral. Saul’s my dreamboat, big but kind. And Elias is my best friend, the one I turn to, the one I tell my dreams to. I want it all. I want all of you.”

“Then what are we going to do?” Saul asked helplessly. If the only answer was to fight, he had the strength for it, but the three of them had banded together to protect Jack Henry. It seemed a shame to turn their cooperation into a competition—a bloody and perhaps lethal one. But if Jack Henry couldn’t choose for himself, how were they supposed to choose for him?