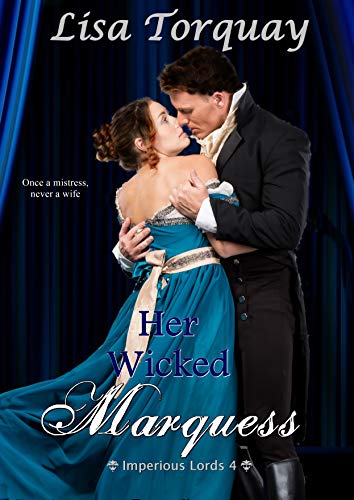 Can there ever be real love between a powerful lord and the actress he took as a mistress?

A year ago, Hester Green's fascination with Lord Worcester led her to accept his proposition to be his mistress, her first foray into the delights of the bedroom. And what delights! Every time they spent the night together, he made her even more addicted to his prowess. But now the gossipmongers are abuzz with his impending betrothal to a duke's daughter. That is too much to swallow, and she severs their liaison even though it wrenches her insides to do so.

Drake, the Marquess of Worcester, has no intention of bending to his mother's manipulation. Even less marry the girl the dowager spread rumours as being his intended. And he has zero intention to allow it to damage a perfectly convenient arrangement with the woman he can't get enough of. But Hester moves out of the house he bought her—and out of his life. He'll find ways to keep her close, though the woman is revealing to be more of a rebel and less of the meek mistress she once was.

Momma Says: 4 stars⭐⭐⭐⭐
For some reason or other, I tend to read historical romance in spurts, and I suppose I'm in that frame of mind lately because I've read several. I think it's the escapism of the genre, and a bit of escape is something we can all use nowadays. Her Wicked Marquess is book 4 in the Imperious Lords series, but I'm gonna go out on a limb here and say it's a standalone. I certainly didn't feel like I was missing anything. The story is a quick read, perfect for whiling away an afternoon or weekend. Drake and Hester are engaging characters and they have good chemistry. Their story may not be packed with realism, but it's certainly entertaining. Hester is a strong woman, and I love that she did what she felt she needed to do even though it broke her heart, and Drake has some pretty modern ideas for his time. This is a don't know what you've got until it's gone type of story, and I do like a romance where the hero has to realize the difference between wanting and desiring someone and loving and needing them. This is my first experience with Lisa Torquay but it won't be my last. Her Wicked Marquess is well written, entertaining, and exactly what I needed for a bit of escape from reality.
❃❃ARC provided by the author