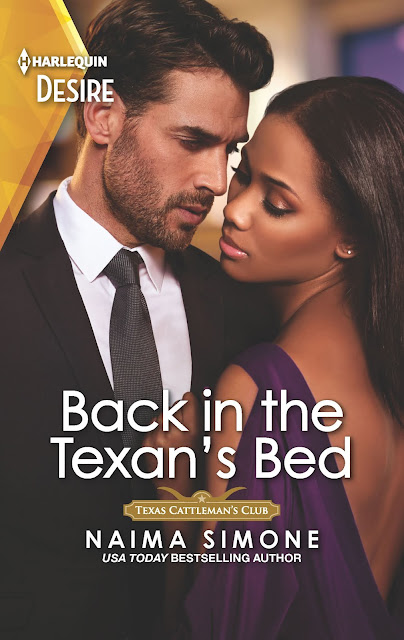 He’s going to claim his child and the woman who got away…from USA TODAY bestselling author Naima Simone. Will they ever learn that giving in to desire is playing with fire?

After discovering he has a secret son, oil heir Ross Edmond isn’t letting Charlotte Jarrett walk away again. He proposes they move in together—to share their son…and a bed. But Charlotte has secrets, and Ross doesn’t know the real reason his family’s former chef left town three years ago—and they still have a powerful enemy who could bring them both down…

Momma Says: 4 stars⭐⭐⭐⭐
I've read this author's work before and enjoyed it, and I'm always up for a second chance romance, but I was a little bit wary of the secret baby trope. It just doesn't usually work for me because I too often end up disliking the secret keeper. However, Naima Simone approaches it a bit differently than the norm, and not only did it work, but I found myself liking this couple and rooting even harder for them once everything's out in the open. The story has a good pace, the couple has great chemistry, and the author really hit it out of the park with the secret baby trope, so I'd say this one is a definite recommended read.
🞿🞿🞿🞿🞿

Excerpt for BACK IN THE TEXAN’S BED by Naima Simone

Russell “Ross” Edmond Jr. sipped his scotch, relishing the smoky flavor with hints of caramel, fruit and a bite of salt, while staring out the window of the Texas Cattleman’s Club meeting room at the beautiful couple currently wrapped around each other in a passionate embrace.

Ezekiel Holloway and Reagan Sinclair—Reagan Holloway now—had caused quite a scandal in Royal, Texas, some months ago when they’d eloped to Vegas against her family’s wishes. Especially since Zeke’s own family had been embroiled in a dirty criminal investigation that involved embezzlement and drug smuggling. But that had all been cleared up, their reputation restored, and now the newlyweds were living out their happily-ever-after.

Ross barely contained a derisive snort. Sure, the two appeared enamored and, yes, happy. The married couple kissed as if Ezekiel was heading off to sea for a months-long absence. Ross would say they were in love. Or, at least, they believed they were.

Unfortunately—or fortunately, in his opinion—he wasn’t a devout disciple at the altar of the emotion that seemed like a convenient excuse for people to lose control, validate idiotic behavior or justify satisfying any impulsive desire.

What did he believe in?

Raising his glass to his mouth again, he turned from the view of the couple and surveyed the elegantly appointed room. Due to recent renovations at the Club, the design was less dark wood and stone, and now boasted brighter colors, larger windows and higher ceilings. Yes, the hunting trophies and historical artifacts still adorned the walls, and the stables remained, as did the pool and tennis courts. Yet, now the Club had a day care and sported painted murals, as well. The whole effect exuded a warmth that had been missing before.

But it all still conveyed wealth. Influence. Exclusivity.

And those ideals he trusted.

Money and power. They could be counted, measured, handled, manipulated, if need be, and were unfailingly consistent.

They’d never let him down.

Unlike people. Unlike love.

Hell, he couldn’t even keep the sneer out of his inner voice.

“Ross, get over here,” Russell Edmond Sr. boomed as if Ross stood farther out in the club’s entryway instead of just several feet away from him. “Do that brooding shit on your own time. We have business to attend to.”

With his tall, wide-shouldered and athletic build that had only gone a little soft around the middle, dark hair dusted with silver at the temples and intelligent, scalpel-sharp gray eyes, Rusty still possessed a powerful physique and commanded respect. Ross strode over to the long, cedar conference table, his gaze fixed not on his father but on the thin stack of documents in the middle of the table. His heart thumped against his sternum in anticipation. To others, those ordinary sheets of paper might seem innocuous. But to him?

Yes, this deal included the financial and marketing backing of The Edmond Organization, but this project—the luxury food, art and wine festival called Soiree on the Bay, which was to be held on a small, private island—was his baby. Well, more aptly, it was a baby that belonged to him, his siblings, Gina and Asher, and his best friend, Billy Holmes. But for the first time, he wasn’t a figurehead wearing the Edmond name and the ineffectual title of executive. Wasn’t a puppet tasked with carrying out Rusty-given orders. Wasn’t just the useless playboy son riding the coattails of his daddy’s success and reputation.

With this project, this event, he would finally step out from under his father’s shadow and show everyone he hadn’t just inherited the Edmond name—he’d earned it. Ross would play an integral role in raising the bar, in solidifying and expanding their legacy as he elevated The Edmond Organization from the national stage to the international one. Something even Rusty hadn’t managed to do in the company’s history.

And in the process, maybe earn that thing that had eluded him the entire twenty-eight years he’d been Rusty’s son—approval.

Again, not love. Men like his father believed in that emotion even less than Ross did. Just ask Rusty’s four ex-wives.

“So this is it? The final contract?” Ross set his tumbler down on the table, trying not to stare down at the documents as if they were the Holy Grail and he a Texas version of Indiana Jones.

“This is it,” Billy Holmes, his college friend and future business partner, said, grinning. “The last step before Soiree on the Bay moves from dreams to reality.”

“Dreams,” Rusty scoffed. “Dreams are for men who don’t have the balls to get out there and pursue what they want.”

USA Today Bestselling author Naima Simone's love of romance was first stirred by Johanna Lindsey and Nora Roberts years ago. Well not that many. She is only eighteen...ish. Published since 2009, she spends her days writing sizzling romances with heart, a touch of humor and snark. She is wife to Superman--or his non-Kryptonian equivalent--and mother to the most awesome kids ever. They live in perfect, sometimes domestically-challenged bliss in the southern US.