✱✱Book Review✱✱ Blog Tour for SOMEONE TO TRUST by Patricia Davids 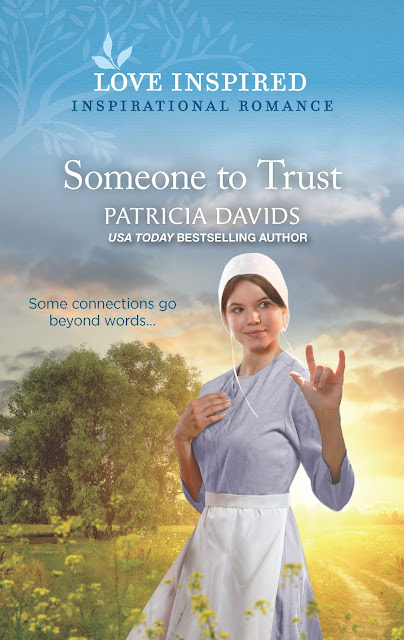 On an Amish matchmaking trip, can she avoid falling in love? Esther Burkholder has no interest in her stepmother’s matchmaking when her family visits an Amish community in Maine. Deaf from a young age, she’s positive a hearing man couldn’t understand the joys and trials of living in a silent world. But Gabe Fischer is certainly handsome, hardworking and brave. More importantly, he sees the real Esther. Might this Amish bachelor be her unexpected perfect match?

Momma Says: 5 stars⭐⭐⭐⭐⭐
I don't read a lot of Amish romance or even inspirational fiction these days, but this one really hit the spot - so much so that I'm thinking I need to remedy that lack of the genre in my TBR. Someone to Trust is the fifth book in the North Country Amish series, but it can totally be read as a standalone. That said, there are some wonderful characters, both primary and secondary, that will make you want more of the series. This book gives us Gabe and Esther, and they are just too darned adorable together. Both characters are lovable and the couple is one you can't help but root for. I liked the way Patricia Davids handled Esther being deaf, including Gabe's determination to learn to communicate with her as well as making things easier for her whenever possible. The whole story comes together wonderfully and it's one of those that leaves you with a smile - something that is much needed in this current stressful and chaotic world.
🞿🞿🞿🞿🞿

Excerpt of SOMEONE TO TRUST by Patricia Davids

“I’m happy to tell you that your mother’s cousin Waneta is coming for a visit.”

Gabe Fisher looked up from the glowing metal wheel rim he was heating in the forge as something in his father’s voice caught his attention. Ezekiel Fisher, or Zeke as everyone called him, wasn’t overly fond of Waneta, so why was he trying so hard to sound cheerful?

Gabe glanced around the workshop. None of his three brothers seemed to have noticed anything unusual.

Seth continued setting up the lathe to drill out a wheel hub. “That will be nice for Mamm. She has been missing her friends back home. I know she and Waneta are close.”

Seth was Gabe’s younger brother by fifteen minutes. They might look identical, but Seth was the most tenderhearted of the brothers. He was twenty minutes older than no-nonsense Asher, the last Fisher triplet, who was readying wooden spokes to be inserted into the finished wheel hub. Asher bore only a passing resemblance to his two older brothers. Where Gabe and Seth were both blond with blue eyes, Asher was dark-haired with their mother’s brown eyes. All three men shared the same tall, muscular frame as their father.

“Is she bringing her new husband to meet the rest of us?” Moses asked, greasing the axle of the buggy they were repairing. At twenty he was the baby brother by four years and the one that looked the most like their mother, with his soft brown curls and engaging grin. He was the only one who hadn’t yet joined their Amish church. He was still enjoying his rumspringa, the “running around” years most Amish youths were allowed before making their decision to be baptized.

“This isn’t the best time for a visit,” Asher said, expressing exactly what Gabe had been thinking.

“Apparently your mother and Waneta have been planning this for ages, but she only told me last night. She wanted it to be a surprise for you boys.”

“You know Waneta. She likes to surprise folks. They should be here later today.”

Gabe continued turning the rim in the fire. Both his parents had gone to the wedding, but he and his brothers had been busy keeping the new business running. A business that didn’t look like it would support the entire family through another winter. If things didn’t improve by the end of the summer, the family would have some hard choices to make.

“They? Her new husband is coming with her, then?” Seth said.

Gabe glanced at his father and saw him draw a deep breath. “He isn’t, but his children are.”

Seth finally seemed to notice their father’s unease and stopped working. “How many children?”

“The house will be lively with that many kinder underfoot,” Moses said. “How old are they?”

“The youngest is ten. The others are closer to your ages,” Daed said, keeping his eyes averted.

Asher’s lips thinned as he pinned his gaze on his father. “Would they happen to be maydels close to our age?”

“Daed?” the triplets said together. Moses stopped what he was doing and gave them a puzzled look.

Their father cleared his throat. “I believe your mother said they are between twenty and twenty-five. Modest, dutiful daughters, as Waneta described them.”

“Marriageable age.” Seth shook his head. “I don’t have any interest in courting until we are sure our business will survive.”

Gabe crossed his arms over his chest. “Has Mamm taken to importing possible brides for us now?”

There was a lack of unmarried Amish women in their new community in northern Maine, but that didn’t bother Gabe. Like Seth, his focus was on improving the family’s buggy-making and wheel-repair business while expanding the harness-making and leather goods shop he ran next door.

“Tell Mamm we can find our own wives,” Asher said.

“When we are ready,” Seth added.

Daed scowled at all the brothers. “That kind of talk is exactly why your mother was worried about sharing this news. She wants you boys to be polite to Waneta’s new stepdaughters and nothing more. Show them a nice time while they are here. No one is talking about marriage.”

USA Today best-selling author Patricia Davids was born and raised in Kansas. After forty years as an NICU nurse, Pat switched careers to become an inspirational writer. She enjoys spending time with her daughter and grandchildren, traveling and playing with her dogs, who think fetch should be a twenty-four hour a day game. When not on the road or throwing a ball, Pat is happily dreaming up new stories.