✱✱Book Review✱✱ Blog Tour for The Setup by Carol Ericson 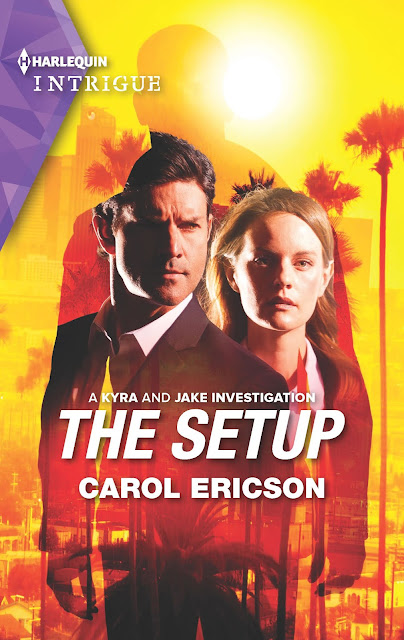 With a serial killer on the loose…

Secrets get you killed.

Detective Jake McAllister isn’t aware Kyra Chase is connected to a twenty-year-old unsolved murder. He sees his new case partner only as an unwelcome distraction. But with the body count rising, they’ll need to trust each other to help them catch a killer who seems to know more about Kyra than Jake does.

From Harlequin Intrigue: Seek thrills. Solve crimes. Justice served.
For more action-packed stories, check out the other books in the A Kyra and Jake Investigation series by Carol Ericson:
Book 1: The Setup

Momma Says: 4 stars⭐⭐⭐⭐
This first Kyra and Jake Investigation is light on romance but high on intrigue. It does establish the characters, and I expect much more on the romance front as the series progresses. That said, what this one lacks in romance it more than makes up for in a tension-filled crime thriller. This investigation kept the pages turning from start to finish. Carol Ericson has a great eye for detail, but it's detail done right - no info dumps or straying from the story, it all flows organically. She also does character development quite well. Even the secondary characters were interesting and added to the story. Judging by what I found in The Setup, I'd say this series is one that should appeal to readers of crime thrillers as well as those of romantic suspense, I enjoy both and can't wait to see what's next for Kyra and Jake.
🞿🞿🞿🞿🞿

“Good thing she was already dead when he took her finger.” Detective Jake McAllister lifted the victim’s wrist and grimaced. He called over his shoulder, “Tire tracks at the trailhead? We know this isn’t the kill site.”

“Too many to identify just one.” His partner, Billy Crouch, impressive in a dark gray tailored suit, purple pocket square and wing tips, strode down the trail to join Jake where he crouched beside the body. “No tire tracks, no cameras. I had one of the officers check with the park rangers.”

“No cameras at the other dump site, either. He’s being careful.” Jake rose to his feet, inhaling the scent of pine from the trees and locking eyes with an ambitious squirrel who’d been busy scurrying up and down the large oak that provided a canopy over the body.

Griffith Park was an oasis of rugged, untamed land in the middle of the urban sprawl of LA. It housed the zoo, the observatory, a concert venue, a carousel, pony rides and acres of wilderness crisscrossed with hiking trails. It had also hosted several dead bodies in its day, including the Hillside Strangler’s first victim.

Jake pointed at the card inserted between the victim’s lips. “Queen of hearts, missing finger—looks like we have a pattern here.”

Billy whistled as he pushed his sunglasses to the end of his nose. “It’s The Player all over again.”

“Copycat.” Jake raised his hand to the crime scene investigators who had just arrived at the park and waved. “The Player was working twenty years ago and abruptly stopped. He’s gotta be dead or in prison.”

“Maybe he just got paroled.” Billy picked an imaginary speck of lint from the arm of his jacket. “He could’ve been twenty when he was operating before, spent twenty years behind bars for armed robbery, as- sault, rape. Now he’s forty, tanned, ready and rested.”

“Could be. They never got his DNA back then. Never left any—just like these two murders.”

Billy whipped the handkerchief, which Jake had believed was just for show, out of his front pocket and dashed it across the shiny tip of one of his shoes. “Damn, it’s dirty out here.”

Shaking his head, Billy clicked his tongue. “Only the shoes are Italian, man. The suit’s from England.”

“Excuse me, Cool Breeze.” Jake bowed to his partner. He’d given Billy the nickname Cool Breeze, and it had stuck. The man knew his fashion, his fine wines and his women.

Jake had warned him about the women because Billy already had a fine woman, Simone, at home. They needed only one divorce in the partnership, and Jake had that covered—not that he had run around on his wife, unless you counted the job as the other woman...and a lot of cops’ wives did.

Someone cleared his throat behind him. “Finger- prints?”

Jake jerked his head toward Clive Stewart, their fingerprint guy in Forensics, his shaved head already sporting a sheen. “Yeah, you can check, Clive. He didn’t leave the knife or box cutter behind that he used to slice off the finger. You might try the playing card, her neck. You know your job, man. I’ll let you and the others do it.”

As CSI got to work, Jake shuffled away from the body on the ground and eyed the crunch of people beyond the yellow crime scene tape. Although still morning, the air possessed that quiet, suffocating feel that heralded a heat wave, and the tape hung limply, already conceding defeat.

Jake pulled out his phone. Holding it up, he snapped some pictures of the looky-loos leaning in, hoping to catch a glimpse of...what? What did they hope to see? Did they want to ogle the lifeless body of this poor woman dumped on the ground?

Maybe one of them was already familiar with the position of the victim. Killers had been known to re- turn to the scene of the crime and relive the thrill.

He swung his phone to the right to take a few more pictures from the other side of the trail. As he tipped up his sunglasses and peered into the viewfinder to zero in on his subjects, he swore under his breath.

What the hell was she doing here?

Billy stepped into his line of fire. “He wanted some- one to discover her quickly. She’s not that far off the trail, but no purse or ID, so he doesn’t want us to identify her right away.”

“You’re blocking my view.” Jake nudged Billy’s shoulder and framed the crowd at the edge of the tape again...but she was gone.

Carol Ericson lives in southern California, home of state-of–the-art cosmetic surgery, wild freeway chases, and a million amazing stories. These stories, along with hordes of virile men and feisty women clamor for release from Carol’s head until she sets them free to fulfill their destinies and her readers’ fantasies. To find out more about Carol and her current books, please visit her website at www.carolericson.com, “where romance flirts with danger.”