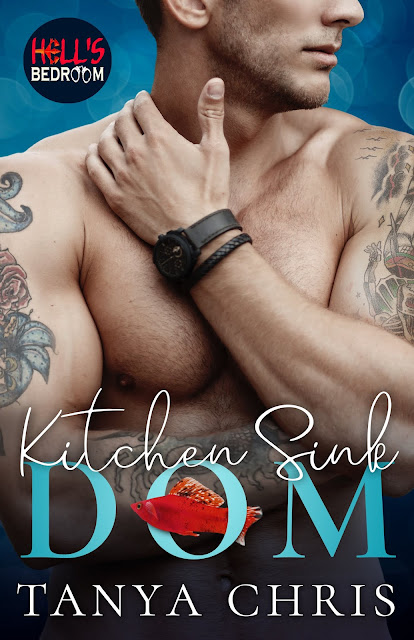 Book 1 of the Hell’s Bedroom series

Available March 23, 2021 from Amazon in ebook and paperback. Eligible for Kindle Unlimited.

When Cash meets the handsome man brimming with nervous energy, he feels like he’s struck gold. Cash isn’t the most dominant of tops, but he’s got a wide repertoire of skills, and he’d be happy to practice every single one of them on Harry, the sub who’s so new to the scene he doesn’t even know his own kinks. But the closer he gets to Harry, the more obvious it becomes that Harry isn’t who he claims to be.

Momma Says: 5 stars⭐⭐⭐⭐⭐
I've read and enjoyed everything Tanya Chris has thrown my way, so it was no surprise that I liked this one too. In fact, I think Cash and Harrison may very well be my favorite Tanya Chris couple. Both characters are absolutely lovable, but Cash stole my heart from the very beginning. There's just something about Cash, and regardless of a few growing pains, I wanted things to work out between him and Harrison. Of course, there's plenty of steamy fun between these two, as well as some kink thrown in - Hell's Bedroom is a BDSM club, after all. But that's not all Kitchen Sink Dom gives us. Nope, not even close. Harrison has a missing person to locate, a missing person that turns into much more. So, now we have a steamy romance and a solid mystery, and what starts as Harrison, his client, and someone recruited to help, turns into someone else and someone after that until we have the whole Scooby gang, so to speak. Granted, the case these characters are working is far from being anything so lighthearted as that, but my point is that we get lots of terrific characters that I hope we see more of as the series progresses. As the first book in a new series, this author has certainly set the bar high for whatever comes next, and I can't wait to see where things go for the next Hell's Bedroom couple.

“What kind of a scene are you interested in?” Cash asked.

“You’re the boss.” Harry darted a quick glance up at him—anxious but also something else.

“I can’t ‘be the boss’ without knowing what you like. Unless you want me to throw random kinks at you and see what sticks.”

“You might as well,” Harry said with a nerve-laced laugh. “I really don’t have any idea. I told you I was new, right?”

“You’re so new you don’t even know what you like?” That was… intriguing. Cash’s kink was driving his partner wild. Usually his partners told him what made them wild—maybe not in exact words, but he’d been around the scene long enough to understand which triggers went with which kinks—and then he executed on it. Very well, too.

If a guy wanted to be whipped, Cash broke out the flogger. If he wanted to be pissed on, Cash let loose. If someone wanted to be bound and gagged, Cash could turn them into a veritable pretzel. He had the skills to wield any implement, expose any vulnerability, satisfy any fetish. But as a service top, he was usually pushing buttons that had already been pretty well mapped out. What would it be like to find those buttons himself, to push them for the very first time?

“I could definitely introduce you to some things.” And enjoy the fuck out of it. “I’m safe, sane, consensual, and I’ve got a lot of experience. Your friend can vouch for me.”

“Tripp. That’s who you came with, right? I’ve only scened with him once, but he’s been around long enough to know how I play.”

“He’s nineteen,” Harry said turgidly, his semi-flirtatious smile gone. “How long has he been around, exactly?”

“Whoa, there.” Cash held up his hands to disavow whatever Harry was accusing him of. “The club I belong to cards people. He wouldn’t have been in there unless he was of age, and as long as he’s legally an adult, his exact age is none of my business. How old are you?”

“I’m not the one who started with the accusations. Tripp can vouch for me. Who’s vouching for you?”

Harry fiddled with the collar he held in his lap, then looked up with more conciliatory eyes. “I’ll trade you IDs.”

Cash chucked. Whatever. He was an open book. He took out his wallet and flashed his driver’s license. The picture had only been taken a couple of years ago, but he looked like a frat boy in it. Despite his size, he gave off zero scary vibes. It was one of the reasons he had trouble attracting and keeping play partners, though not the only one.

Harry leaned forward to peer at the license, getting close enough that Cash could pick up on his cologne—something rich and masculine with a heavy musk component. The scent matched his carriage. Cash took a deep inhale and tried not to hope too hard that the two of them could negotiate a scene. If he wasn’t the right top for Harry, then he had no business scening with him, but man, he hoped he could be the right top.