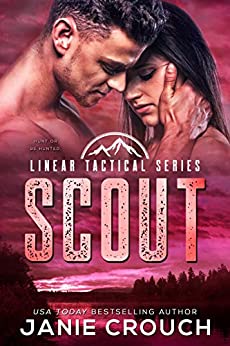 **Purchase by March 14 to receive the collector's edition of SCOUT at no extra cost—expanded storyline plus full bonus epilogue!**

Linear Tactical’s Wyatt Highfield is running for his life with intel that will break up a human trafficking ring.

The last thing he wants is to bring danger to Nadine Macfarlane’s door. The gentle beauty has been through enough, and has the scars—physical and emotional—to prove it.

But she’s his only option.

Trying to heal from wounds caused by trusting the wrong person, Nadine has spent the past two years hiding from nearly everyone. The only exception has been her online relationship with Wyatt. So when they meet face-to-face by sheer chance, she thinks it’s a sign from the universe that it’s time to start living.

Not that it’s time to start dying.

As Wyatt’s secret comes out, Nadine realizes she has to face the past in order to save the future.


★★★★★
USA Today and Publishers Weekly bestselling author Janie Crouch brings you that perfect blend of heart-melting romance with a side of danger. A protective alpha hero who'll show the woman he loves he's not afraid of her scars.

SCOUT was first released as part of the Danger & Desire box set, but has been expanded for this edition. It contains no cliffhanger, no cheating, and a HEA guaranteed—come escape reality for a little while!

Momma Says: 5 stars⭐⭐⭐⭐⭐
At the very end of the blurb for Scout, it says, '-come escape reality for a little while!' That sums up the Linear Tactical series perfectly, and Scout is one more reason why. I read the shorter version of this book when it was included in the Danger & Desire set, and I loved it then - I love it even more now. Every time Janie Crouch gives us a new couple in this series, I'm absolutely sure I've found my favorite. Well, I guess I've found my favorite again because I love Wyatt and Nadine to pieces. Having already read this one, I dove in knowing the twists and where the danger would come from. I knew how the romance would progress, and how much chemistry this couple would have (it's a lot!). Knowing all of that didn't spoil a thing for me. I was just as caught up as the first time, and that's the beauty of Janie's books. You can pick them up and revisit these wonderful characters over and over, and I often do just that. I can't recommend Scout or any of its predecessors enough. The whole series is full of action, intrigue, and romance, and terrific couples you can't help but root for.