The Siren's Call Tour and Giveaway 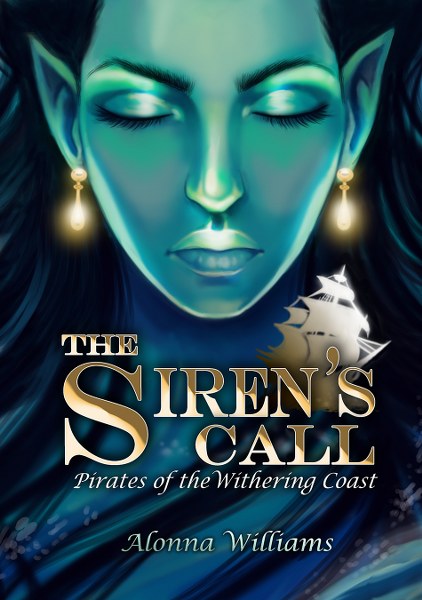 The Siren's Call
Pirates of the Withering Coast Part 1
by Alonna Williams
Genre: Lower YA Fantasy

“Oh little one, the darkness is waiting, oh little one, run from it if you can; come little one, where the light can find you…”
This was a familiar shanty to Manchester born, Trevor Henderson; having grown up being mesmerized by stories of swashbuckling rogues, adventurous pirates and captivating aquatic creatures, he was no stranger to sea shanties. These tales instilled in him a longing for the sea.
Upon turning sixteen, he begins hearing whispers in the night, coaxing him to leave his posh life behind and follow his dreams; when Trevor finally takes the risk, he’s swept away on an adventure he never expected.
He soon learns the truth about his own identity and history, causing him to wonder if he should have set foot outside his comfort zone…
Add to Goodreads
Amazon * B&N * Google * Kobo * Blue Gingham Publishing

William Henderson wasn’t a fearful man, and why should he be? Standing at a good height of six-foot-two with a mighty, muscular build, there was no doubt that he could defend himself from any harm—along with the fact that his past occupation included looting, pillaging, fighting, and other daring tasks that took courage.

Today, however, was different. Today, he was facing a challenge he had never seen coming. He stood before his weak, pregnant, dying wife, Sara. His hazel eyes filled with pain, and his features clouded over with darkness. Feeling hopeless, he kneeled at her bedside, praying for a miracle. In this moment, his might, nor his wealth, could help him.

“William.” His sister, who was younger by five years, shivered. “You can’t just let her and the baby die,” she whimpered.

William looked up at her. Her auburn hair was messy as it rested on her shoulders, and her dark-brown eyes had dark circles under them due to the constant lack of sleep. Tears stained her cheeks, and her pink lips quivered as she made her way closer to Sara and gently dabbed a cold rag on her forehead. William kept on gripping Sara’s hand, feeling his heart sink further than he thought possible as he looked at her. Sara lay there, still so beautiful, even in her weakened state. Her fair skin still rosy and fresh, her lips still red, and her long brunette hair still shiny—her hand was freezing cold, though, and she trembled where she lay. William took a deep breath and gulped. “I don’t know what to do, Angelica.”

“You have to take her to Arjan,” Angelica firmly told him.

“I can’t. Taking her to him would mean exposing her to—”

“He’s the only one who can help her. William, please! We can’t just stand here hoping she’ll get better. Take her.”

“She’s right,” an older woman weakly stated as she entered the room. She placed her hand on William’s shoulder; he could feel her shaking. Her gray hair was woven into a side braid that rested gently over her shoulder, and distress filled her pale blue eyes. “We’re going to have to take the risk,” she said.

“I won’t let my daughter and my first grandchild die. Arjan is well-trained in the Melusines art of alchemy. He can help her, and he is the only Siren you can trust with the life of your wife and son. I give you permission to take her to him. Please do it,” she begged.

William looked down at Sara who groaned, shifting uncomfortably. He considered the pros and cons before he finally succumbed, nodding. “Angelica, pack her things, and let’s leave tonight,” he instructed, and his sister went running off.

Catherine took William’s face in her hands and weakly smiled at him. “And please, call me Mother,” she requested. “I will contact Arjan and tell him to meet you in the cove on the shore. Go.”

Alonna Williams is a children's book author and has been writing ever since she was a little girl. It started with a short story and soon progressed to novels. Alonna has worked on, and grew up with a Pirate series entitled, Pirates of the Withering Coast, her favorite series of all, as well as a mystery series, a Sci-Fi/Superhero series and more! When she's not writing you'll most likely find her dancing, whether it be, Tap, Ballet, Jazz or Lyrical, or watching a good classic movie or cozying up to a Disney film!
Website * Facebook * Twitter * Instagram * Amazon * Goodreads