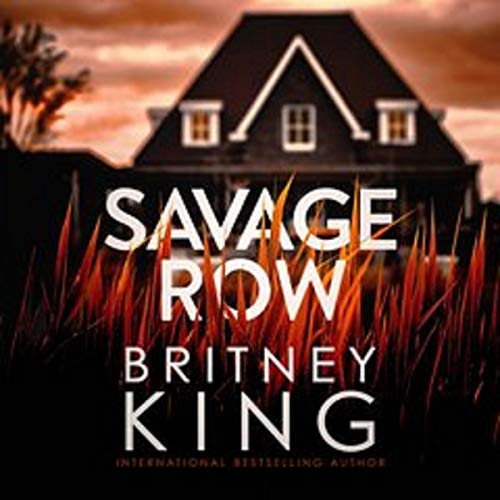 The international best-selling author of Her and The Social Affair returns with another suspenseful thriller that very well could be set in the house next door.

Jack Mooney, a career criminal, has been in prison for nearly a decade, quietly nursing his hatred for the jurors who put him there. One in particular gets him through the endless days - the alluring Amy Stone.

When Mooney is granted early release, he makes Amy his first priority. To his delight, she's even more enticing than before, and better still, she has a lot more to lose than he'd imagined.

As Mooney's campaign of terror mounts, the police seem powerless to protect the Stone family, who must rely on their wits to survive a psychopath hell-bent on revenge.

Momma Says: 5 stars⭐⭐⭐⭐⭐
If there's one thing I can always count on, it's cracking open a Britney King novel and not being able to put it down. Savage Row is one more in a list of unputdownable reads by this author - it's totally disturbing, spine-tingling, and if you live in suburbia, you'll be closing the curtains and looking over your shoulder. It's the kind of book that completely messes with your mind. Savage Row doesn't just give us a bad guy, not just one bad guy anyway. Nope, this one gives us varying degrees of bad and the tension comes from wondering which one is gonna step a toe or two over the line first. This is a story where things that seem totally innocuous probably aren't, where even the simplest of things can and often do mean something sinister. This psychological thriller gets really dark, but if you've got the stomach for it, it's not to be missed. It's the kind of edge-of-your-seat thriller that's left even this jaded reader reeling. So, gobble it up, sit back and think about all of it for a bit, then read it again. That's what I did, and it was just as good, maybe even more so, the second time.
All of that is what I had to say about Savage Row when I read it, and yes, I did read it twice. Then I had the opportunity to listen to the audiobook and jumped at it. And I'll just tell you, even knowing exactly what's gonna happen, knowing who the worst guy is, knowing every single twist, I loved every minute of it. Laura Jennings is a great match for Britney King's writing style, and she does an excellent job of building the tension to keep a listener on the edge of their seat.
So, if you're looking for some look over your shoulder type of chills, I highly recommend Savage Row and Britney King.