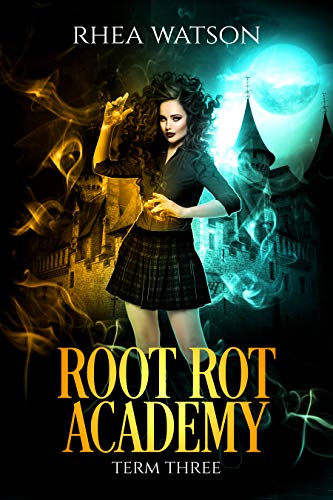 The warlock who butchered my parents has reignited a centuries-old feud—and only one of us will make it out alive.Once upon a time, I fantasized about how it would feel to ruin him.One year ago, I lived on dreams of righteous justice.Reality is complicated. Messy. Impractical and unpredictable.Amidst the fallout of that horrific night in the cave, Benedict Hammond takes aim at me, my school, my reputation, and my men. Jack, Gavriel, Bjorn—no one is safe.But he doesn’t get to win this time. Not today. Not on my watch.Root Rot Academy has taught me so much about myself, but apparently it has one last lesson to teach…Even with the world on fire, a monster will never stop hunting you.Never.Root Rot is an academy Why-Choose romance trilogy centered around the professors and staff. It contains mature subject matter that might not be suitable for all readers.

Momma Says: 5 stars⭐⭐⭐⭐⭐
Wow! Just... Wow! Talk about saving the best for last. The thing is I loved, loved, loved Terms One and Two, so Rhea Watson had already set the bar pretty high for the big finale, but I'm pretty sure the first two were just the appetizers because this one is all that and then some.
From the beginning, this trilogy has been high on danger and suspense with attraction, lust, and friendship coming in bit by bit. One of my favorite parts of the whole thing has been the connection between the characters. Even when they seemed to have little in common, there was still at least a kind of respect between them along with the men sharing an interest in Alecto. Gavriel is still my favorite of Alecto's guys - of course, the snarky fae is one of my favorite types of character - but I like them all. And I really liked how the relationship between the three men and Alecto took shape.
Given that there has been a continuing storyline since the beginning, the thing that brought Alecto to the Academy, we're given plenty of danger and lots of edge-of-your-seat scenes as Alecto and company deal with one threat after another. Speaking of, there are some scenes that are tense and some of the violence is pretty graphic. The author does give a warning about mature subject matter, and I would suggest heeding that warning if you have triggers.
As for me, I've enjoyed every minute of this trilogy, which is no surprise. I have yet to read a book by this author under any of her pen names that I haven't thoroughly enjoyed. In Root Rot Academy, she gives us one more fantastic world to get lost in - something I always look forward to with Rhea Watson's books.