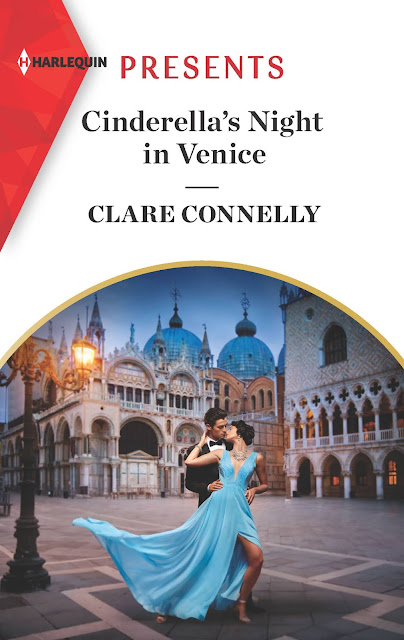 This shy Cinderella will go to the ball…but will she end the night in the billionaire’s arms? Harlequin Presents author Clare Connelly enchants with this passionate and uplifting romance.

The most infuriating man she’s ever met.

The only man she’s ever wanted…

When Ares Lykaios insists that Bea Jones accompany him to a gala, she wants to refuse—if just to put the arrogant Greek in his place. Yet Ares is as gorgeous as he is commanding, and she can hardly say no to her PR firm’s biggest client.

Bea is shy, awkward…and breathtaking in a ball gown. And one kiss proves her desire matches Ares’s own. So after the opportunity arises to finish what they started in Venice, resisting becomes the ultimate test of his strict self-control!

Momma Says: 4 stars⭐⭐⭐⭐
One of my favorite romance tropes is enemies to lovers, and the blurb for this one sounded promising on that front, especially with an arrogant man who gets under the heroine's skin. Cinderella's Night in Venice delivers on the fire and chemistry, and I really liked Bea and Ares together. Clare Connelly does a terrific job with the emotional aspect, including the characters' professions of love and attraction. The story is a quick read, which was perfect for curling up on the couch during a rainy weekend - a great way to chase away the gloomy day blues.
🞿🞿🞿🞿🞿

‘Oh, my God.’ Bea stared at the fast-spreading blob of coffee with a look of sheer mortification on her dainty features. ‘I’m so sorry. I didn’t see you.’

The man—at least, he looked part-man, yet he was also part-warrior, all broad shoulders, lean muscle and hard-edged face—stared at her with surprise first, and then displeasure. ‘Evidently.’

‘Please, let me—’ She cast an eye around for some- thing—anything—she could use to mop up the man’s shirt, which now bore the marks of her early evening energy boost. ‘I just made it. It must be hot. Does it hurt?’

She grimaced, looking around the office, but it was past six and almost everyone had left. ‘Let me just grab—’ She plucked a tissue from a box on a nearby desk, lifting it to his shirt and wiping furiously, all the colour draining from her face when she realised she was only making it worse. Little white caterpillars of tissue detritus were sticking to the coffee stain, damaging the obviously expensive shirt even more.

His fingers curled around her wrist, arresting her progress, and warmth enveloped her out of nowhere, shocking her into looking up into his face properly for the first time. At five foot ten she generally found she was almost at eye level with most men but not this guy. He stood a good few inches above her, at least six foot two, she guessed.

There was something familiar about him, though she was sure they’d never met. She’d definitely have re- membered him. His face was angular and strong, like his body, a square jaw covered in dark facial hair—not a look that was cultivated or painstakingly trendy so much as a fast-growing five o’clock shadow. His lips were curved and bracketed on either side by a deep groove, like parentheses in his face, his cheekbones were prominent and his brows were thick and dark, framing his grey eyes in a way that turned the already spectacular specimens into works of art.

Her breath caught in her throat and she pulled at her hand on autopilot, a familiar instinct to deny anything approaching closeness marking her actions, her lips twisting in a silent gesture of rejection and simultaneous apology. ‘Naturally the London Connection will cover the dry-cleaning fees,’ she offered, her cheeks growing hot under his continued inspection.

He held up a hand in a gesture of silence.

Bea swallowed, taking a step back. ‘I didn’t see you.’ Quit talking, Captain Obvious, she derided. It was a tendency she’d worked hard to curb—speaking when nervous was a girlhood habit she’d kicked long ago. Or thought she had.

‘Clare?’ Bea parroted with a frown, flicking a glance at her wristwatch to be sure she had the time right. Was her friend and founder of the London Connection—a woman who was as well-regarded for her business nous as she was for being notoriously disinterested in romance and relationships—dating this guy? She hadn’t mentioned anything, but something had been different with Clare recently. Perhaps this explained it?

‘Clare Roberts—about this tall, dark brown hair? Given that you work here, I imagine you’ve heard of her?’

Bea’s eyes narrowed at his tone, which was innately condescending. It was on the tip of her tongue to tell the man that not only had she heard of Clare, but they’d gone through almost every major event in their lives, along with Amy Miller, side by side together. The three amigos, from way back.

‘We had a meeting and I do not appreciate having my time wasted.’

‘Oh.’ She grimaced; the oversight was unprofessional and unexpected. ‘She’s not here.’

‘She must be.’ His nostrils flared as he exhaled a deep breath. ‘Please go and find her.’

‘Find her?’ Bea felt like a parrot, but her senses were in overdrive.

‘You know, walk through the office until you dis- cover where exactly she is?’ He spoke slowly, as though Bea was having difficulty comprehending what he was saying, when his English was perfect, albeit tinged with a spicy, exotic accent that was doing funny things to her pulse points.

Old feelings of inadequacy were stealing through her, making her stomach swirl with a very familiar sense of unease. She tried to banish it, forcing a tight smile to her face. ‘Clare was called away on urgent business,’ Bea explained, a pinprick of worry at her friend’s inexplicable and urgent departure pulling at her. ‘Is there anything I can help you with, Mr...?’ She let her question hover in the air, allowing him time to offer a name.

His brows knitted together, and every cell in his body exuded impatience. ‘You must be mistaken. This meeting has been scheduled for weeks. I flew in this after- noon for this specific purpose.’

Bea’s eyes opened wide. If that was true, then they’d bungled something—badly—and that ran contrary to every instinct she possessed. ‘Oh.’

‘Yes,’ he clipped, crossing his arms over his chest and glaring—there was really no other way to describe his expression—at her across the space. The air between them seemed to grow thick with a tension that made Bea feel as though she was continually cresting over the high point of a roller coaster. She dug the finger- nails of one hand into her palm, forcing her expression to remain neutral with effort.

‘As I said, something urgent came up, otherwise I know Clare wouldn’t have left you in the lurch.’ She waved a hand in the direction of Clare’s office, the lights off, door closed. ‘If you give me a moment, I can try to get in contact with her, or log into her calendar and see if—’

He scowled fiercely. ‘This is completely unacceptable.’

Bea hesitated, unprepared for this man’s obvious frustration. When he was cross, like this, his accent grew thicker, more mysterious and honeyed.

‘I do not have time to be messed around, nor to accept excuses from some secretary or cleaner or what- ever the hell you are. I’ve worked with Clare a long time, but this is—’

Bea felt as though she were drowning. She’d only been with the London Connection for a few months but she knew what this company meant to her friends. Not to mention what it meant to her! This PR firm was important to all of them and, whoever this man was, she didn’t want to have a disgruntled client on her hands.

‘Yes, very disappointing,’ Bea inserted, belatedly remembering that while she was relatively new to the firm she was also the head of the legal department, having been recruited across from her senior partner role in a top tier City firm. She wasn’t accustomed to being spoken to as if she were the dirt on someone’s shoe. Modulating her voice to project an air of calm authority, she met his eyes straight on, her spine jolting at the clarity of their steel-grey pigment. They were like pewter; she wasn’t sure she’d ever seen anything like it before. ‘Unfortunately, standing here firing scorn and derision at me isn’t going to achieve very much, is it?’

His shock was unmistakable. His eyes widened, flashing with an emotion she couldn’t register, and then his jaw moved as though he was grinding his teeth together.

She expelled a soft breath as she cut in. ‘Yes, you were, but that’s okay. I understand you’re disappointed. And I am truly sorry that you’ve flown to London from—’

She waved a hand through the air. ‘Wherever, only to find Clare not here.’ She turned, moving towards her friend’s office. ‘You mentioned that you’ve worked with Clare for a long time, so obviously you’re aware how unusual this is. I hope you’re able to overlook this rare mistake.’

‘I am not generally in the habit of forgiving mis- takes, rare or not.’

A shiver ran down her spine at the steel in his words. She didn’t doubt for a second that he meant what he said. There was an air of implacability about the man that she’d felt from the minute he’d arrived.

Bea had, at first, thought his accent was Italian, but as he spoke more, her appraisal changed. She was al- most certain he was from Greece—one of her favourite places in the world. She’d spent a summer there during her degree, and had fallen in love with the sun, the water, the history and, most of all, the anonymity. When she travelled abroad, no one knew Bea as Bea- trice Jones, daughter of Rock Legend Ronnie Jones and Supermodel Alice Jones.

‘Then I hope you’ll make an exception just this once,’ she implored as she flicked Clare’s screen to life, typing in her friend’s password quickly. ‘Please, have a seat.’

Clare Connelly grew up in a small country town in Australia. Surrounded by rainforests, and rickety old timber houses, magic was thick in the air, and stories and storytelling were a huge part of her childhood.

From early on in life, Clare realised her favourite books were romance stories, and read voraciously. Anything from Jane Austen to Georgette Heyer, to Mills & Boon and (more recently) the 50 Shades trilogy, Clare is a romance devotee.

She first turned her hand to penning a novel at fifteen (if memory serves, it was something about a glamorous fashion model who fell foul of a high-end designer. Sparks flew, clothes flew faster, and love was born.)

​In 2016, Clare Connelly accepted a book deal with Harlequin and now fulfils a life-long dream by writing romance that sets your soul on fire for the brand that the world trusts with its heart.