The Marriage He Demands 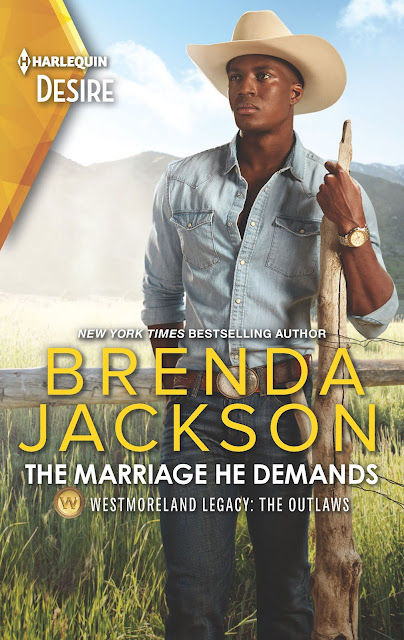 In the wilds of Wyoming ranch country, he needs something only she can give him. What price is too high to pay? Find out in this sizzling contemporary romance from New York Times bestselling author Brenda Jackson!

This ranching heir wants it all, including the woman who stands in his way!

Businessman Cash Outlaw has inherited almost all of his late mother’s Wyoming ranch…but still needs the fifty acres left to her former caretaker. As negotiations with beautiful, determined Brianna Banks become much more intimate, she reveals she’ll only sell him the property…if he gives her a baby! Cash’s counteroffer? That the mother of his child must become his wife!

From Harlequin Desire: Luxury, scandal, desire—welcome to the lives of the American elite.
Love triumphs in these uplifting romances, part of the Westmoreland Legacy: The Outlaws series.
Book 1: The Wife He Needs
Book 2: The Marriage He Demands
Book 3: What He Wants for Christmas

Momma Says: 4 stars⭐⭐⭐⭐
Sometimes you just need a low angst cowboy romance to get lost in. The Marriage He Demands was just what I needed for a bit of escapism in an otherwise stressful week. Cash and Brianna are likable and their romance is fun and engaging. This book is the second in the Westmoreland Legacy: The Outlaws series, but it definitely stands alone. If you require a lot of drama and turmoil in your romances, you aren't going to find that here, but if you're in the mood for some lighter romantic entertainment, this is the way to go.
🞿🞿🞿🞿🞿

Two days later, Cash flew his Cessna to the Laramie Regional Airport. He’d ordered a rental car to be there when he arrived, and it was. Shifting his cell phone to the other ear, he tossed his overnight bag in the back seat as he continued his conversation with his sister, Charm. She was calling from Australia with her condolences.

Charm had tagged along with Garth’s best friend, Walker Rafferty, and his wife, Bailey, on a trip to visit Bailey’s sister, Gemma, who lived in Australia.

“Thanks, Charm, but you know the real deal with this. It’s not like me and Ellen had a close relationship. Like I told Garth, I’m surprised she remembered I existed long enough to put me in a will.”

Cash glanced at his watch before starting the car and switching the phone call to the vehicle’s speaker system. He would get a good night’s sleep, and be at the meeting with the attorney in the morning at eleven. Then he would leave, head back to the airport and fly home to Fairbanks.

“I need to end the call, Charm, so I can concentrate on following the directions to Black Crow. I’ll talk to you later, kid.”

As Cash headed for the interstate, he thought about the conversation he’d had with his father be- fore leaving. Bart was typical Bart. Even with six adult offspring, their old man still assumed it was his God- given right to stick his nose into their business when it didn’t concern him.

Cash had put Bart in his place just that morning when he’d tried telling Cash to make sure he got everything his mother owned because it was rightly due him. Cash had made it clear to Bart that he didn’t want a single thing. He’d even seriously thought about not showing up for the reading of the will. As far as he was concerned, it was too late for Ellen to make up for the years she had been absent from his life. The only reason he had decided to come was for closure.

The drive from Laramie to Black Crow took less than an hour. He couldn’t help wondering when his mother had moved to Wyoming. According to Bart, when she left Fairbanks thirty-four years ago, she had moved to New York.

Cash saw the marker denoting the entrance into Black Crow’s city limits, and recalled all he’d learned from doing an internet search last night before going to bed. It had first been inhabited by the Black Crow Indian tribe, from which the town derived its name. The present population was less than two thousand people, and most fought to retain an old-town feel, which was evident by the architecture of the buildings. He’d read that if any of the inhabitants thought Black Crow wasn’t progressive enough for them, they were quickly invited to leave. But few people left and most had lived in the area for years. It was a close-knit place.

He came to a traffic light and watched numerous people walking around, going into the various shops. As he sat there, tapping his hand on the steering wheel, his gaze homed in on a woman who was walking out of an ice-cream shop. She was strikingly beautiful. He couldn’t help noticing how she worked her mouth on her ice-cream cone, and he could just imagine her working her mouth on him the same way.

Cash drew in a deep breath as he shifted in the seat. She looked pretty damn good in her pullover sweater and a pair of jeans. If she was a sampling of what Black Crow had to offer, then maybe he needed to hang around for another day or two and not be so quick to leave town tomorrow.

He chuckled, thinking it would take more than a beautiful face and a gorgeous body to keep him in this town. Besides, he doubted that even if he stayed he’d be able to find her. He had more to do with his time than chase down a woman. Chances were, she was wearing some guy’s ring. There was no way a woman who looked like her was not spoken for.

The driver behind him beeped his horn to let Cash know the traffic light had changed and it was time to move on. Not able to resist temptation, he glanced back for one final look at the woman and saw she was gone.

Brenda Jackson is a New York Times bestselling author of more than one hundred romance titles. Brenda lives in Jacksonville, Florida, and divides her time between family, writing and traveling. Email Brenda at authorbrendajackson@gmail.com or visit her on her website at brendajackson.net.