A Plan for Her Future 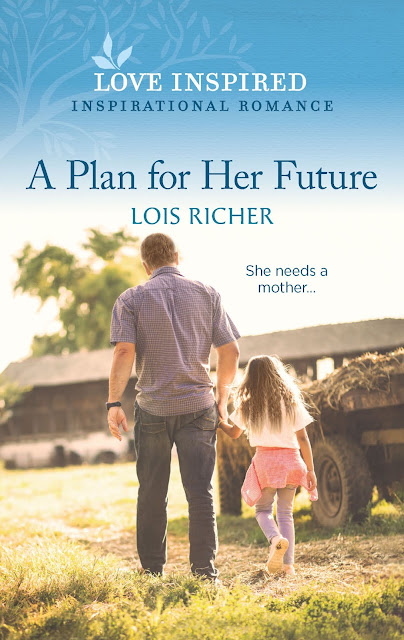 could give him a second chance at love.

Jack Prinz barely knows how to be a grandfather, much less raise a child by himself. But he has the perfect solution—marry his childhood friend to provide his orphaned granddaughter with the mother figure she needs. Now he has to convince Grace Partridge to accept his loveless proposal. If only sticking to his plan were that simple…

Book 1: Hoping for a Father
Book 2: Home to Heal
Book 3: Christmas in a Snowstorm
Book 4: A Plan for Her Future

Momma Says: 4 stars⭐⭐⭐⭐
Such a charming and touching story. As a grandmother myself, I loved the storyline here, especially since most romances revolve around coming-of-age couples. I also liked that Jack is learning a lesson many of us have had to learn as we come to trust in our faith. I know I have, and I still struggle with wanting the answers now rather than later, so this one definitely hit home for me. The book is well written, the couple is one you just want to root for, and I always enjoy when a child is in the mix - particularly when they're done as well as Richer does Lizzie. I thoroughly enjoyed A Plan for Her Future, and while this may be the first book I've read by this author, it won't be the last.
🞿🞿🞿🞿🞿

Grace Partridge, you look stunning so stop fussing.” Jessica James flipped up the car’s visor, hiding the passenger mirror. “Trust me, with your makeup update, your stunning wardrobe and now that glorious feathered cut, you’re going to be attracting men’s looks the entire three months you’re traveling the world.”

“Oh.” Grace gulped. Attracting men’s looks— Did she really want that? “Maybe it’s too much...”

“Out!” Jess laughed as she parked in front of Grace’s tidy bungalow. She leaned across and flicked the door latch so the passenger door swung open. “No more second- guessing yourself. Embrace the new you, best friend of mine. And finish getting ready,” she ordered after glancing at her watch. “The Calhoun boys will soon be here to drive you to catch your flight in Missoula.”

“Yes, they will. Thanks for being my cheerleader.” Grace hugged Jess, stepped out of her car and then she bent over to ask anxiously, “You will call me before I leave?”

“Try and stop me.” Jessica sounded amused by her hesitancy.

“Thank you, dear friend. You are so—”

“I love you, too. Later, kiddo.” With a cheery wave, Jess drove away.”

Inside her home, Grace dropped her keys on the dish in the foyer while thinking how much she’d miss Jess these next few months. She hung the new dress she’d just purchased in the closet. What a lot of things she’d bought for this trip.

Actually, her wardrobe shift wasn’t only for the trip. It was part of Grace’s plan to shed the three D’s: Dumpy, Drab and Dreary.

Her musing disintegrated at the sound of frantic pounding on her front door. When she pulled it open, her jaw dropped at the sight of a young girl whose face streamed with tears while she danced from one foot to the other.

Taken aback, Grace wondered when that nest of black hair had last seen a comb.

“Of course, dear.” Grace snapped into action and grabbed her phone. “Uh, where is your pops?”

“There.” The child pointed.

Grace gasped at the sight of a silver-templed man in a battered black leather jacket, lying sprawled on the street in front of an expensive-looking black car. She dialed 911 before racing outside and down her sidewalk toward the victim.

“I didn’t see him, Grace,” her elderly neighbor Mrs. Fothergill wailed as she stood by her car. “When I started backing up, he wasn’t there. Then he was and my foot slipped on the gas pedal. Please help him.”

“I’ll try, Mrs. Fothergill. I’m reporting an accident.” Grace focused on the operator and gave her address. “A man’s been hit by a car. We need the ambulance and police. Hold on while I try to find out more about his condition.”

Grace knelt by the man. He was unconscious. She pressed her fingers against his neck for a pulse. With his head half-buried under his arm she couldn’t get a good look at his face. She was afraid to move him lest there were nonvisible injuries.

“Oh, Lord, help us,” Mrs. Fothergill chanted repeatedly. Distracted by the feeble woman’s agitation, Grace suggested she sit in her car and wait for help.

“Please, do something for Pops,” the little girl implored her.

“I’m doing my best, dear.” Grace studied her watch. “He has a pulse,” she told the operator. “It’s a bit fast. Yes, I do have first-aid knowledge, but I don’t want to move him because his leg is at a strange angle. Also, there’s a large bruise forming above his left eyebrow. I believe he hit his head when he fell so he may be concussed.” She turned to the child. “Does your grandfather take medication?”

“He already took it,” the girl explained. “I dunno if he’s s’posed to take more.”

Grace relayed that information and the name of the pre- scription on the vial she withdrew from the pocket of the leather jacket. The name suddenly registered.

“Jack?” she gasped in utter consternation.

The man moaned and moved his arm slightly, revealing his face. Grace gaped as her breath whooshed out.

He’d aged. His face was thinner, more angled, rendering him more rakish-looking than ever. But it was Jack. The operator demanded to know what was going on.

“The victim’s name is Jack Prinz,” Grace explained after licking her dry lips and finding her voice. “He’s fifty-three. Not from Sunshine. Not for many years.”

With more than fifty books and millions of copies in print worldwide, Lois Richer continues to write of characters struggling to find God amid their troubled world. Whether from her small prairie town, while crossing oceans or in the midst of the desert, Lois strives to impart hope as well as encourage readers' hunger to know more about the God of whom she writes.