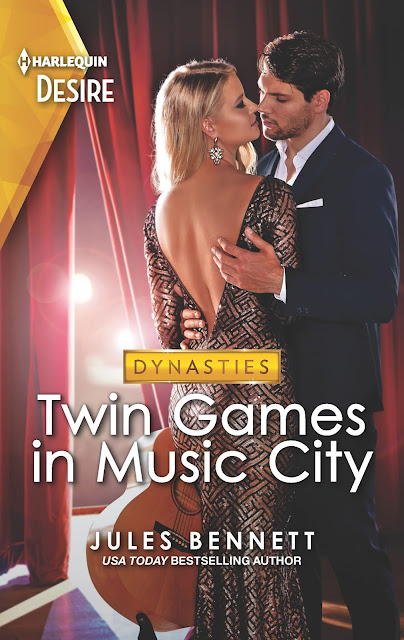 Country singer Hannah Banks wants what she shouldn’t have.

The owner of her new label—the man in charge of her career—is way too hot. So hot he’s all she can think about… So to put distance between them, she poses as her quieter twin sister. That should keep temptation away…

Except Will Sutherland doesn’t play games. He wants the real Hannah—in his studio and in his bed—as long as what’s between them stays their secret. But when an old rival uncovers the truth, Will must choose between playing the press or playing for keeps…

Momma Says: 4 stars⭐⭐⭐⭐
If you like rocker romances, I'd suggest taking a walk on the country side of the music biz with Twin Games in Music City. This first in the Dynasties: Beaumont Bay series is also a twin story - so kind of a mistaken identity - and a bit of a secret romance. I like that the story gives a behind the scenes view of the music business - it's fiction, of course, but I still enjoy the look behind the curtain, so to speak. I also like our romantic couple. True to form for the genre, Will and Hannah have things to overcome to get to their HEA, but that's to be expected. The whole story is fun and engaging, and I'll be looking forward to meeting the rest of the characters in this promising series.
🞿🞿🞿🞿🞿

Will Sutherland settled into the corner leather booth and watched as Hallie Banks wound her way through the tables at Rise and Grind.

This little meeting shouldn’t already have him irritated, but it did. Will didn’t want to meet with Hallie—he wanted to meet with her twin sister, Hannah.

But obviously, Hannah Banks, country superstar and America’s sweetheart, couldn’t be bothered with such mundane things as setting up her recording schedule for the next album or going over the tour dates and venues.

He’d only met her a handful of times in passing at various events within the industry. Will had al- ways found her attractive; he’d have to be dead not to. Hannah Banks could make any man do a double take and he was no different.

As far as knowing her personally, he couldn’t re- ally say much, but this first official meeting wasn’t going as planned.

Her selfish way of thinking might have worked for her old record label, but now that she’d signed with Elite, she was going to have to accept the very real fact that she wasn’t in charge. He was.

Hallie offered a soft smile and reached to shake his hand. “Good morning. Have you been waiting long?”

Will came to his feet and gripped her hand, sur- prised by how soft and delicate she seemed. He didn’t recall noticing Hallie’s hands before...and he shouldn’t be noticing them now.

He’d already found himself fantasizing about Hallie’s sister, Hannah. The last thing he needed was an attraction to twins. That wouldn’t be good for business, and being attracted to either of them didn’t fit his professional style.

Hallie was more conservative in her wardrobe than her usual blinged-out sister. Perhaps that’s because Hallie was the manager and worked behind the scenes in a quieter, calmer setting. Whereas Hannah was in-your-face, sparkly, over-the-top...and not at all the type of woman he should have been drawn to. Yet, he found himself noticing his new star more and more.

He needed to get his thoughts under control.

“I just got here myself.” He gestured to the seat across from him. “Please, sit.”

She put her bag in the vacant seat and settled into the chair with curved arms. A barista came right over to take their orders before leaving them alone again.

“So where did you say Hannah was and why couldn’t she make it today?” he asked, hoping to get a direct answer this time.

Hallie blinked up at him. “Oh, I didn’t say. She just asked me to meet you. After we talk, I will go over the schedule with her. She did request that she record in her home studio, so that was the main thing I’m supposed to tell you.”

Of course. Will shouldn’t have been surprised, though. Since that horrific storm had swept through Beaumont Bay only a few weeks ago, the town was still trying to recover. It was all hands on deck in this Nashville bedroom community to rebuild the multimillion-dollar homes that had taken a hit and the few businesses that had been affected.

The Bay wouldn’t stay down long. This lakeside community was where Nashville came to play, where all the deals were done, where the country music elite hid their juiciest secrets. And it was a town that legendary music producer Mags Dumond pretty much owned...or thought she did.

He’d give Mags her due. She’d built up Beaumont Bay with her late husband and former mayor. It had been her foresight—and her insistence on hosting all her parties here over the decades—that had made a home, or second home, in the Bay a necessity for anyone who was anyone in Nashville.

Will’s family had been born here, and not to a country music bloodline. Travis and Dana Sutherland were in the real estate industry and owned nearly everything...unless Mags had claim on it.

But the Sutherland brothers had made a name for themselves in the music industry by pulling themselves up by the bootstraps...and staying out of Mags’s way for the most part. The woman had been a thorn in his family’s side for decades, but he refused to think about that now. The next step in building his family’s music empire was his new star, Hannah Banks, and finishing the renovations to the studio that had been damaged.

The reconstruction was taking much too long, although even a one-day delay was too long in this industry. He had music to make and singers relying on him, not to mention the trickle-down effect of the tours that were already being promoted to celebrate albums that were releasing soon.

The whole damn situation was a nightmare and Hannah Banks—the superstar he’d stolen from Mags, whom he needed to make this whole plan a reality—couldn’t find the time for a courtesy, in- person meeting. Sending her sister/manager/twin wasn’t the same.

“I would have to check out Hannah’s recording studio before I could commit to that agreement,” Will informed Hallie. “We are going to have to start the production process next week to keep up with the deadlines. Tell Hannah I’ll be at her house first thing in the morning to check out this recording room of hers.”

Hallie pursed her pale pink lips and shook her head. “Tomorrow morning won’t work.” She pulled out her phone and scrolled, then tapped her finger on the screen. “How about Tuesday at ten?”

Considering this was Friday, there was no way in hell he was waiting until Tuesday. Will pulled in a deep breath and sighed. Was Hallie going to be just as difficult as the country diva? The pout of her lips said yes, and something hard and dark moved inside him.

And that’s when he knew something was off here.

“I’m not sure how things went when she worked for Mags at Cheating Hearts, but now that she’s with Elite, I run the schedule and say when things are going to get done.”

Hallie’s eyes narrowed. “Is that right? Well, maybe I should’ve just stayed with Cheating Hearts.” Will inched forward, resting his hands on the table. “Hannah? Are you kidding me?”

She cursed beneath her breath and Will gritted his teeth. He’d known something felt off, but he’d never thought for a second his newest artist would play such a childish game as to pretend to be her twin. No way in hell would he fall for this swapped-twin trap. Hannah Banks was about to learn who was in charge real quick.

USA TODAY Bestselling Author Jules Bennett has penned more than 50 novels during her short career. She's married to her high school sweetheart, has two active girls, and is a former salon owner. Jules can be found on Twitter, Facebook (Fan Page), and her website julesbennett.com. She holds contests via these three outlets with each release and loves to hear from readers!