Embrace of the Wild Tour and Giveaway 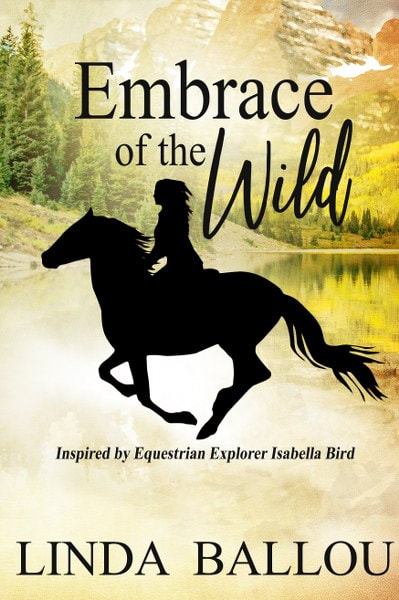 “I have just dropped into the very place I have been seeking but in everything it exceeds all my dreams. “
Isabella Lucy Bird (1831-1904)
Some people live to travel; Isabella Lucy Bird traveled to live. Dare to saddle up with this equestrian explorer on her way to becoming the best-loved travel writer of her day. Set off on a voyage from England to the South Seas. Jump ship in Honolulu, then hop on board the Kilauea steaming its way to sleepy Hilo. Be captivated by the lavish beauty of the Sandwich Islands. Charge up the flank of a living volcano, ford roaring torrents on the way to Waipio Valley where the gods come close. Feel the loving touch of the healing hands of a Hawaiian elder and let go of chronic pain that has held you captive.
Invigorated from your stay in Hawai’i press on to ride solo in Colorado on a 600-mile mountain tour. Here you meet an unlikely soulmate in the form of renegade Rocky Mountain Jim. Convince him to guide you to the top of the loftiest peak in the Rocky Range, and try not to fall in love with him and the majesty of his realm. Know the wild abandon of giving rein to your mount with tears streaming, hair flying, and blood pumping. Set your spirit free with Isabella as she breaks through physical and social barriers to follow her dreams.
Goodreads * Amazon 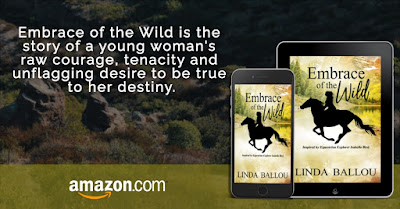 The narrow track now slippery with red mud was treacherous. My mare struggled for traction with her legs sliding out from under her. Cascades streaking white down the cleft of the pali dislodged rocks that rattled down the mountain. At times the rain was so dense, I lost sight of Kilani who forged ahead undaunted. We crossed several smaller gulches with rushing water up to my horses belly without incident. But, when we arrived at the lip of Hakalau gulch lost my conviction. Foaming water broiling in a riotous rush to the sea had risen half way up the side of the water corridor. Limbs of trees and leaves swirled in a muddy chaos below. The thunderous sound of breakers crashing on the sea cliffs filled me with dread. If I didn’t drown in the river, I would surely be crushed on the rocks by the pounding sea. I decided I would prefer spending a night in the rain on the shore over attempting this crossing.

Two native men on the other side of the raging torrent had lassoed the horse of a woman trying to reach the other side. With ropes tied to trees they were pulling her to the shore. Her horse floundered falling backwards into the brew. The woman went into the drink. She clung to the horn of the saddle while her body was caught in the current. With a herculean effort the men pulled the flailing animal to the shore. The horse found purchase and the woman was rescued.

Kilani was not dissuaded by the perilous crossing we just witnessed. She stood on the edge of the gulch prepared to jump into a certain death. The men threw the lasso over her horses head and she pressed her horse forward. My heart was in my throat as I watched her being picked up by the roiling water and sent spinning downstream.  I screamed over the wild chorus of the river for her to face the flow. She was attempting to cross sideways with her horse completely submerged up to its head. She managed to swing around to face the torrent and the men were able to pull the wretched animal towards the shore. The horse’s eyes rolled white with fear, snorting and puffing as it struggled with every ounce of it’s being to find footing on slippery rocks while the rain pounded even more intensely.  Kilani managed to gather herself back onto the horse as it lurched up the far bank of the river. I could only hope for her that her husband’s affections would be rewarded in kind.

I made my decision not to follow her lead to a sudden death. But, as I was about to turn back a lasso was draped around my mare’s neck. Without so much as an “Are you ready?” I was pulled into the roiling drink.  Instantly immersed up to my neck, I had no choice but to press forward. I spurred the hapless animal beneath me with all my might. She was swimming toward the far side, but we were drifting towards the sea. I yelled for help over the roar to no avail. My screams were swallowed in the roar of the ceaseless foaming rollers below. This looked to be a sad ending to my new found freedom.

From shore Kilani screamed “Spur. Spur. Spur.”  Both men were on the rope they pulled taunt around my horse’s neck. They secured their feet on boulders and grunted with each pull giving a small release so they did not choke her to death. The animal was gasping, and gave out a sorrowful whinny that shook her entire body. I was lifted by the water out of the saddle. My arms were being pulled out of their sockets as I clung to the big horn of the Mexican saddle. The rain was blinding and I was about to let go and join the spirits in the underworld of Po. Suddenly, my mare found a reserve of strength and lurched forward. With the help of the men pulling her, she was able to swim close enough to the shore to scramble up the slick wall of mud and out of the torrent.

Upa finally arrived with a mule in tow. The men tossed him the rope that he put around the creatures neck. He deftly hopped rocks, dove into the muddy brew and navigated the charging river like an amphibious creature leading the mule behind him. He laughed loudly when he reached our party on the other side.

My horse stood trembling. My teeth chattered involuntarily. The tumult of blinding rain had not ceased.  I didn’t feel lucky. 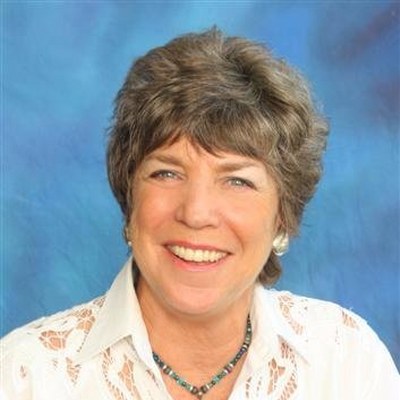 From my roots in Alaska I receive strength, centeredness and respect for the awful power of nature. Numerous adventure articles, essays on my website are set in my homeland. In Hawaii I found a spiritual awakening, sensuality and the heroine for my historical novel Wai-nani: A Voice from Old Hawaii. Lost Angel in Paradise, takes you day tripping with me to my favorite outdoor days in sun-splashed California. I share tips for "Wannabe" travel writers in GET GREAT TRIPS. I added Lost Angel Walkabout to my audio books for my armchair traveling friends in 2020. I just released of Embrace of the Wild an historical novel inspired by the life of equestrian explorer Isabella Bird.