Her Child to Protect 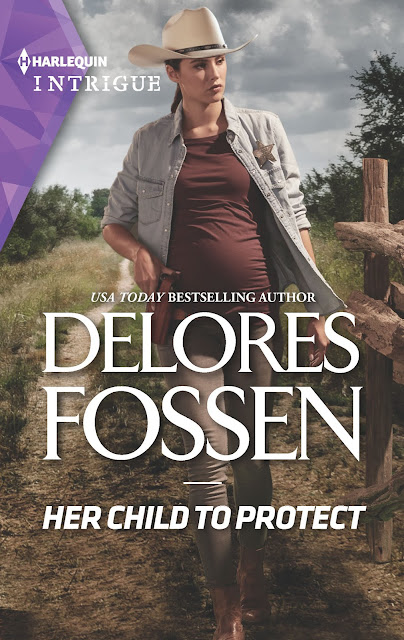 Nothing can stop her

When she arrives at a murder scene, Deputy Della Howell is not pleased to find her recent ex already on the job. She’ll work the case with Sheriff Barrett Logan but will keep the secret she’s certain Barrett isn’t ready for—she’s pregnant with his child. But as the dueling cops investigate, familiar sparks reignite between them…just as they fall prey to a very tenacious killer.

For more action-packed stories, check out the other books in the Mercy Ridge Lawmen series by Delores Fossen:
Book 1: Her Child to Protect

Momma Says: 3 stars⭐⭐⭐
Her Child to Protect is the introduction to the Mercy Ridge Lawmen which revolves around the Logan siblings. This one is Barrett's romance with Della. I'll admit that this trope isn't one of my favorites, but Delores Fossen does give us some interesting characters and a setting that I'm always a sucker for. I do love me some cowboys, and the cowboy lawman is pretty much guaranteed to grab my attention. All in all, this is a solid start for a new series, and I'm anxious to see what's next.
🞿🞿🞿🞿🞿

Sheriff Barrett Logan aimed his flashlight in the ditch and looked for a dead man.

There were no signs of him, but then Barrett hadn’t believed there would be. That was the problem with getting an anonymous tip. It could be a hoax. However, since he was the sheriff of Mercy Ridge, Texas, checking out hoaxes was part of his job description.

Especially this one, which had come in the text he’d gotten from an unknown number.

There’s blood near the county marker. She finally did it. She murdered him.

Barrett didn’t know who this she was, but that wasn’t the only word that had stood out for him. Blood, finally and murdered had also grabbed his attention. If this was indeed some kind of prank, then the person who’d sent the text had clearly wanted to embellish the details in such a way to make him jump right in and investigate.

Keeping watch around him, Barrett moved away from his truck that he’d left parked on the road. He’d put on his emergency flashers and kept on his high beams in case someone was out this time of night. Not likely, though. This was a rural road with a mile or more separating the sprawling ranches that dot- ted the area. Plus, it was nearly one in the morning, and most folks had long gone to bed. Mercy Ridge wasn’t exactly a hotbed of partying and such.

Barrett fanned the flashlight over the sign that the texter had mentioned. The sign wasn’t just to let drivers know they were entering another county but also to mark the lines of jurisdiction. Barrett and his deputies policed this side, but if the supposed body was beyond the sign, then that would fall under the jurisdiction of the Culver Crossing PD.

The cool spring rain spat at him, soaking the back of his shirt and his jeans. Thankfully, though, his Stetson was keeping the water out of his eyes, making it easier for him to see a long stretch of the ditch. Definitely no body and no blood in there, but he did see something else.

Someone or something had trampled down the weeds on the other side of the ditch. Weeds that practically arrowed toward a thick cluster of trees and underbrush.

Avoiding the trampled down parts, Barrett jumped across the ditch, his boots sinking into the wet ground, and he adjusted his flashlight again. However, before he could follow the trail, he heard the sound of an approaching vehicle. One that braked to a screeching stop right behind his truck. It was a Culver Crossing cruiser, and Barrett started muttering some profanity before the deputy stepped out.

Barrett hadn’t expected her to have changed much in these two months, and she hadn’t. Well, except for that troubled look she was giving him. Then again, Della often looked troubled, and there was often plenty of wariness in her crystal blue eyes.

The rain had already gotten to her, he noticed. There were strands of her shoulder-length dark brown hair clinging to the sides of her face and neck. Her shirt was doing some clinging, too. Definitely something he hadn’t wanted to notice.

Della pulled in her breath and released it slowly, the kind of thing someone would do when steeling themselves up. It didn’t seem to help, though, be- cause at the end of it, there wasn’t much change in her expression.

“Did you get a text telling you that a body was out here?” she asked.

Her voice and expression were as cool as the night rain, and it reminded Barrett that it hadn’t always been that way. Of course, the noncool times had happened when she’d been in his bed. Since that was another reminder he didn’t want or need, he pushed the thought aside.

“Yeah,” he verified, and purposely turned back to his search.

He tried to look unruffled by all of this, but his thoughts were going a mile a minute. Why had someone texted both of them? Was this some kind of sick ploy to get them back together? If so, heads were going to roll.

USA Today bestselling author, Delores Fossen, has sold over 70 novels with millions of copies of her books in print worldwide. She's received the Booksellers' Best Award, the Romantic Times Reviewers' Choice Award and was a finalist for the prestigious Rita ®. In addition, she's had nearly a hundred short stories and articles published in national magazines. You can contact the author through her webpage at www.deloresfossen.com