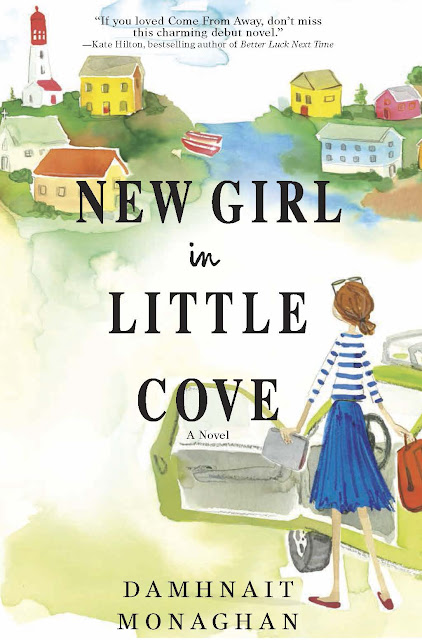 Take a literary trip to Newfoundland: the island of the world’s friendliest people, the setting for the award-winning musical Come From Away, and home of the delightfully quirky and irresistibly charming debut, NEW GIRL IN LITTLE COVE (May 11; $16.99; Graydon House Books) by Damhnait Monaghan! After being utterly scandalized by the abrupt departure of their school’s only French teacher (she ran off with a priest!) the highly Catholic, very tiny town of Little Cove, Newfoundland needs someone who doesn’t rock the boat. Enter mainlander Rachel O’Brien —technically a Catholic (baptized!), technically a teacher (unused honors degree!)— who is so desperate to leave her old life behind, she doesn’t bother to learn the (allegedly English) local dialect. Stuck on an island she’s never known surrounded by a people and culture she barely understands, Rachel struggles to feel at home. Only the intervention of her crotchety landlady, a handsome fellow teacher, and the Holy Dusters – the local women who hook rugs and clean the church – will assure Rachel’s salvation in this little island community.

Momma Says:  4 stars⭐⭐⭐⭐
If you've ever lived in a small town, Little Cove will feel pretty familiar. I grew up in one and now live in another, and one thing seems to always ring true. Small town gossip is practically a tangible thing. Everyone knows everyone else's business. Little Cove may be different from my own small town in many ways, but in other ways, I almost felt at home. And that's how I knew Damhnait Monaghan had experienced small-town life herself. The setting, the characters, the story - it all felt real. Of course, it is fiction, so there were a few things that may have pushed at one's suspension of disbelief, but for the most part, this whole story just felt wonderfully real. It was perfect for curling up on this rainy weekend and getting lost in the world of Little Cove, which is exactly what I did. The book is charming, engaging, and completely entertaining, and I'll be interested to see what this author does next.
🞿🞿🞿🞿🞿

The battered sign came into view as my car crested a hill on the gravel road. Only 389 people? Damn. I pulled over and got out of the car, inhaling the moist air. Empty boats tilted against the wind in the bay below. A big church dominated the valley, beside which squatted a low, red building, its windows dark, like a row of rotten teeth. This was likely St. Jude’s, where tomorrow I would begin my teaching career.

I whirled around. A gaunt man, about sixty, straddled a bike beside me. He wore denim overalls and his white hair was combed neatly back from his forehead.

“Car broke down?” he continued.

“No,” I said. “I’m just … ” My voice trailed off. I could hardly confide my second thoughts to this stranger. “…admiring the view.”

He looked past me at the flinty mist now spilling across the bay. A soft rain began to fall, causing my carefully straightened hair to twist and curl like a mass of dark slugs.

“Might want to save that for a fine day,” he said. His accent was strong, but lilting. “It’s right mauzy today.”

“Mauzy.” He gestured at the air around him. Then he folded his arms across his chest and gave me a once-over. “Now then,” he said. “What’s a young one like you doing out this way?”

A smile softened his wrinkled face. “Down from Canada, hey?”

As far as I knew, Newfoundland was still part of Canada, but I nodded.

“Phonse Flynn,” he said, holding out a callused hand. “I’m the janitor over to St. Jude’s.”

“I knows you’re staying with Lucille,” he said. “I’ll show you where she’s at.”

With an agility that belied his age, he dismounted and gently lowered his bike to the ground. Then he pointed across the bay. “Lucille’s place is over there, luh.”

Above a sagging wharf, I saw a path that cut through the rocky landscape towards a smattering of houses. I’d been intrigued at the prospect of a boarding house; it sounded Dickensian. Now I was uneasy. What if it was awful?

“What about your bike?” I asked, as Phonse was now standing by the passenger-side door of my car.

“Aren’t you going to lock it?”

I thought of all the orphaned bike wheels locked to racks in Toronto, their frames long since ripped away. Jake had been livid when his racing bike was stolen. Not that I was thinking about Jake. I absolutely was not.

“No need to lock anything ’round here,” said Phonse.

I fumbled with my car keys, embarrassed to have locked the car from habit.

Phonse waited while I jiggled in vain. Then he walked around and held out his hand. I gave him the key, he stuck it in and the knob on the inside of the car door popped up immediately.

“Handyman, see,” he said. “Wants a bit of oil, I allows. But like I said, no need to lock ’er. Anyway, with that colour, who’d steal it?” I had purchased the car over the phone, partly for its price, partly for its colour. Green had been Dad’s favourite colour, and when the salesman said mountain green, I’d imagined a dark, verdant shade. Instead, with its scattered rust garnishes, the car looked like a bowl of mint chocolate chip ice cream. Still, it would fit right in. I eyeballed the houses as we drove along: garish orange, lime green, blinding yellow. Maybe there had been a sale on paint.

As we passed the church, Phonse blessed himself, fingers moving from forehead to chest, then on to each shoulder. I kept both hands firmly on the steering wheel.

“Where’s the main part of Little Cove?” I asked.

There was nothing but a gas station and a takeout called MJ’s, where a clump of teenagers was gathered outside, smoking. A tall, dark-haired boy pointed at my car and they all turned to stare. A girl in a lumber jacket raised her hand. I waved back before I realized she was giving me the finger. Embarrassed, I peeked sideways at Phonse. If he’d noticed, he didn’t let on.

Although Phonse was passenger to my driver, I found myself thinking of Matthew Cuthbert driving Anne Shirley through Avonlea en route to Green Gables. Not that I’d be assigning romantic names to these landmarks. Anne’s “Snow Queen” cherry tree and “Lake of Shining Waters” were nowhere to be seen. It was more like Stunted Fir Tree and Sea of Grey Mist. And I wasn’t a complete orphan; it merely felt that way.

At the top of a hill, Phonse pointed to a narrow dirt driveway on the right. “In there, luh.”

I parked in front of a small violet house encircled by a crooked wooden fence. A rusty oil tank leaned into the house, as if seeking shelter. When I got out, my nose wrinkled at the fishy smell. Phonse joined me at the back of the car and reached into the trunk for my suitcases.

“Gentle Jaysus in the garden,” he grunted. “What have you got in here at all? Bricks?” He lurched ahead of me towards the house, refusing my offer of help.

The contents of my suitcases had to last me the entire year; now I was second-guessing my choices. My swimsuit and goggles? I wouldn’t be doing lengths in the ocean. I looked at the mud clinging to my sneakers and regretted the suede dress boots nestled in tissue paper. But I knew some of my decisions had been right: a raincoat, my portable cassette player, stacks of homemade tapes, my hair straighteners and a slew of books.

When Phonse reached the door, he pushed it open, calling, “Lucille? I got the new teacher here. I expect she’s wore out from the journey.” As he heaved my bags inside, a stout woman in a floral apron and slippers appeared: Lucille Hanrahan, my boarding house lady.

“Phonse, my son, bring them bags upstairs for me now,” she said.

I said I would take them but Lucille shooed me into the hall, practically flapping her tea towel at me. “No, girl,” she said. “You must be dropping, all the way down from Canada. Let’s get some grub in you before you goes over to the school to see Mr. Donovan.”

Patrick Donovan, the school principal, had interviewed me over the phone. I was eager to meet him.

Lucille smoothed her apron over her belly, then called up the stairs to ask Phonse if he wanted a cup of tea. There was a slow beat of heavy boots coming down. “I’ll not stop this time,” said Phonse. “But Lucille, that fence needs seeing to.”

Lucille batted her hand at him. “Go way with you,” she said. “It’s been falling down these twenty years or more.” But as she showed him out, they talked about possible repairs, the two of them standing outside, pointing and gesturing, oblivious to the falling rain.

A lump of mud fell from my sneaker, and I sat down on the bottom step to remove my shoes. When Lucille returned, she grabbed the pair, clacked them together outside the door to remove the remaining mud, then lined them up beside a pair of sturdy ankle boots.

I followed her down the hall to the kitchen, counting the curlers that dotted her head, pink outposts in a field of black and grey.

“Sit down over there, luh,” she said, gesturing towards a table and chairs shoved against the back window. I winced at her voice; it sounded like the classic two-pack-a-day rasp.

The fog had thickened, so nothing was visible outside; it was like watching static on TV. There were scattered cigarette burns on the vinyl tablecloth and worn patches on the linoleum floor. A religious calendar hung on the wall, a big red circle around today’s date. September’s pin-up was Mary, her veil the exact colour of Lucille’s house. I was deep in Catholic territory, all right. I hoped I could still pass for one. 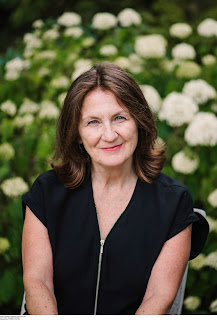