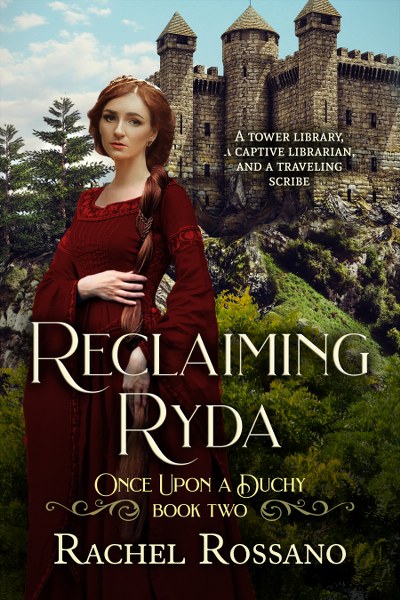 Rydaria lives as a prisoner in a tower library. Captured as a child, her past is a mystery. Maintaining the literary treasures within her care, she studies the world through books that give her a glimpse of the freedom she craves.
A scribe by trade, Crispin has devoted the last three years of his life seeking the lost heir of Avalene. He travels to Worthenave’s famed library in hopes of finding the key. Instead, he discovers a new mystery, a beautiful librarian who is locked in with her books every night.
As the days pass, Crispin must choose. Rydaria’s precarious situation is deteriorating. Meanwhile, his duty demands he leave before the Duke of Worthenave uncovers his quest. Still, the scribe can’t bring himself to abandon the captive in the library tower, even if it costs him his mission.
Inspired by Rapunzel and East of the Sun West of the Moon
Add to Goodreads
Amazon * Apple * B&N * Kobo * Books2Read

A large circular room greater than thrice my height in diameter lay beyond the gate. On all sides from the floor to about two feet below the ceiling, which was well beyond my reach, were shelves laden with all manner of written records. Binders, scrolls, bound volumes, drawers, boxes, and files lined each shelf. Small tags hung from many of them—each card covered in neat writing. Over them, a wooden ladder hung by hooks on a rail that ran the circumference of the room. Above the track, small rectangular windows nested in the thick stone walls between the top shelves and the carved ceiling. In the center of the rotunda lay a thick round carpet. On it sat a large wooden table that had clearly been made to match the shelves and five padded chairs.

I crossed to the table and set my scribe’s bag on the polished surface. As I surveyed the shelves wondering where I ought to begin my search, I came up short. Someone was singing—a woman by the sound of it.

Leaving my bag behind, I turned around searching for the source of the voice, which was how I discovered the stairs. Tucked behind the shelves opposite the gate by which I entered, they could not be seen from the entrance. The narrow steps led upwards, following the curve of the stone tower wall. In the niches where the straight wooden boards of the stairs didn’t quite match the curve of the stone, someone had tucked all kinds of odd things, like clay jars, colorful baskets, and crocheted blankets.

As I climbed, I struggled to focus on the singer’s words. The words weren’t from my native tongue. However, the melody sounded familiar. I came to a halt on the landing just outside a second room almost precisely like the one below, the sounds fell into place.

She was singing in Saruthian.

Pale as the moon all still and lovely,
The maiden’s heart longed for his touch.
Still, the moon hung quiet, unresponsive,
Cold and unfeeling despite her love.

Her honeyed voice washed over me. Blinking in the glow of the late-morning light pouring in the octagonal windows above the shelves on this level, I studied the singer as she continued her work. She was perched halfway up the ladder against the shelf with a bag full of tomes strapped to her hip and a long golden-brown braid falling down her back like a thick rope. I couldn’t help thinking of the ancient Saruthian tale of the captive of the rampion witch.

She was definitely fetching enough to play the role of the captive. With the long length of hair, the color of honey, the hue falling between the alfalfa and buckwheat honeys my bees produced at home, she could snare any man. Her form appeared pleasant as well, slender and curved in all the right ways.

As she reached the last of the verses in the poem, I fully expected her to stop. Stepping into the room, I prepared to introduce myself.

But she didn’t stop. As she set the second-to-last book in place, she began to sing a verse I had never seen in any of my references. My mind scrambled to translate it as she sang. Then she turned around.

A soft squeak escaped her, followed by a heavy thud as the last book fell from her suddenly lax fingers and hit the floor.

“Who are you?” she demanded.

Rachel Rossano is a happily married mother of three children. She spends her days teaching, mothering, and keeping the chaos at bay. After the little ones are in bed, she immerses herself in the fantasy worlds of her books. Tales of romance, adventure, and virtue set in a medieval fantasy world are her preference, but she also writes speculative fantasy and a bit of science fiction.
Website * Facebook * Twitter * Instagram * Bookbub * Amazon * Goodreads