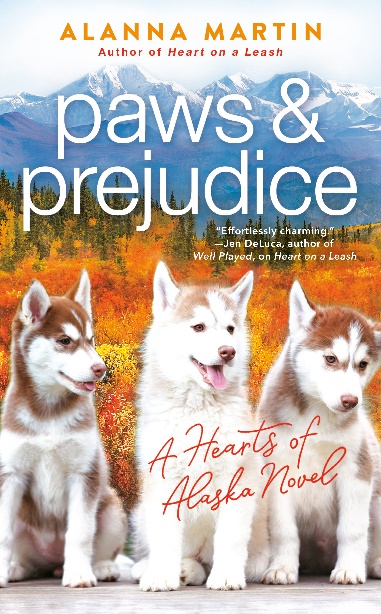 It's up to a trio of adorable rescue huskies to make two lonely hearts in a coastal Alaskan town realize that true love is worth too much to turn tail and run.

Glaciers have nothing on Kelsey Porter when she decides to freeze someone out. After getting burned once, she's not about to let it happen again. And right now all that icy contempt is focused on one annoyingly attractive and entitled interloper: Ian Roth. Not only is he looking to take advantage of her quaint, coastal community, tainting the small-town charm of Helen, Alaska, but he has committed the one crime she can never forgive--he doesn't like her dogs.

Unlike what Kelsey believes, Ian loves Helen's charms as much as she does. That's partly why he's determined to open a brewery there, and he's not about to let anything or anyone stop his dream from coming true. But he didn't count on the beautiful, prickly woman getting under his skin. Or having to be within hand-biting proximity of her three huge huskies.

When Kelsey's family conscripts her into helping Ian get his brewery off the ground, she finds herself caught between a rock and a hard . . . muscular . . . man who has a fear of dogs. But the longer they work together, the more she can feel herself begin to thaw. Now she'll have to choose: let sleeping dogs lie to protect her heart, or mush head-on toward love.

An enemies-to-lovers trope in a small-town romance, two of my favorites in romance. Add in the huskies because - well, huskies! - and this was a must-read. It doesn't hurt that I read the first book in the series and enjoyed it as well. That said, you can read this one as a standalone, but in small-town romance series, there's a pretty good chance you're gonna run into some characters from earlier books, and the characters in this series are a hoot. As for this couple, Kelsey and Ian have good chemistry, but there are a few things to work through. First and foremost is Ian's dislike for her huskies. Gasp! That's a pretty big dealbreaker for a dog owner. Granted, he has a reason, but Kelsey has more than that to cause her to be so crabby about things. She has a secret that she doesn't want the townspeople of Helen to know, and the job her father has volunteered her for may bring out the truth whether she likes it or not. So, like the first in the series, Paws and Prejudice is an entertaining RomCom with engaging characters and a fast-paced storyline. I'm really liking the town of Helen and its quirky inhabitants, and I'll be looking forward to whatever's next.

Kelsey Porter had always feared that the lies she told would one day come back to bite her in the ass. She'd just never expected the bite would come in the form of work she had no business doing for a man she wanted nothing to do with. But lies were cruel. They built on themselves-words turning into sentences and sentences into paragraphs, until Kelsey had written a novel of falsehoods about who she was and what she did for a living. So when her father volunteered her labor to Ian Roth, Kelsey was triply screwed.

One, she wasn't about to confess that her alleged work experience was a lie.

Two, she was already extremely busy.

Three, and perhaps most important, Ian was a jerk who didn't deserve what little free time she had.

Despite never having spoken to Ian, Kelsey was absolutely positive of number three. The man had shown zero interest in her dogs, and that spoke of a cold, unfeeling heart.

Kelsey had tried convincing her father she was too busy to help Ian, but her reasoning had been brushed off as easily as the death glare she'd given him. That was no surprise. Kelsey's glare had a tendency to make people, particularly male people, want to pat her on the head and tell her how cute she was. Cherubic, even. Being taken seriously was hard when you were short. Add in her blond curls and blue eyes and it was damn near impossible. Her twin brother, Kevin, who shared her general appearance, at least had the advantage of being male. No one thought Kevin was cute when he scowled at them.

And no question, her father wouldn't have volunteered Kevin to do unpaid labor. That was the sort of BS demanded only of women. Her father hadn't cared one bit that Kelsey had deadlines to meet and a house she was renovating. Making Ian happy had been more important to him.

"You know I'm right," Kelsey said as she pointed out this last incontrovertible fact.

Josh had the good sense not to argue, which was why he was her favorite cousin. "You're probably right, yes. But try not to be so negative. Ian doesn't know your situation. It's not his fault."

So that was who the nagging Be nice voice in her head sounded like. She'd been telling it to shut up since her father had dropped this bomb on her yesterday, and Kelsey turned the full force of her glare on her cousin. It was a combination of displeased, dismissive, and disgusted that on another face might have been lethal. "Excuse me?"

Like her father had, Josh ignored the glare. Freaking men.

They had embarked on their semi-regular afternoon ritual, walking their combined six huskies around the park in downtown Helen. Kelsey had given Josh his three dogs when he moved here a couple of years ago, and they mingled with hers-Romeo, Juliet, and Puck-as they made a circuit around the park's perimeter.

What a difference a few weeks made. Helen hadn't entirely shut down for the winter yet, but the number of tourists had so rapidly declined, it was like someone had shut off a spigot. The park, just a couple of weeks ago, had been a maze to navigate with six dogs, but now it was an easy stroll. That was good, because the chillier weather made Kelsey want to keep a faster pace even as she delighted in the scent of the wet grass and salty bay water. Anything smelled better than the drywall compound she'd been inhaling all morning.

Well, almost anything. She was supposed to meet with Ian at his brewery in an hour, and Kelsey assumed the place would smell like beer. She hated beer. Even if she did have experience writing marketing materials, which she most certainly did not, she still would be the worst person in the world to help Ian.

"I'm not saying it was cool of your father to volunteer you," Josh said as he attempted to detangle a couple of leashes. "But how long can it take you to write some stuff for the brewery's website?"

"It's not only the website. It's also press releases, and a puff piece for the local paper. Maybe even a longer article to submit to some travel zines."

"And that." Josh winced, and Kelsey hoped it was dawning on him why she was being so negative.

Lies-spinning them for a living was called fiction. Living them was turning out to be a pain in the ass. Everyone in town, including Josh, believed Kelsey was a freelance writer, and they all had their own ideas as to what that meant. She'd never bothered to correct them, since it hadn't mattered. Until now.

Kelsey hadn't the faintest clue what the website work might entail, but she did have an idea how much time it took to write for the Helen Weekly Herald, because she did it on occasion. It helped keep her cover and paid for the occasional new doggie toy, but she hated it. The only thing Kelsey enjoyed writing was novels. Steamy paranormal romance novels about a pack of husky shifters living in the Alaskan bush, to be 100 percent precise, because romance readers knew exactly what sort of stories they wanted, and Kelsey aimed to provide them for the ones who liked hers. It wasn't what she'd planned to do with her life, but she enjoyed it, was apparently good at it, and had gotten extremely lucky to be able to support herself with it.

And there was no way in hell she could tell anyone in Helen about it. Thank goodness for pen names.

Growing up, Alanna Martin wanted to be an astronaut, a doctor, and an actor--possibly all at once. After nine years of studying psychology, she somehow became a writer instead. This turned out to be the best career choice of all because she can work in her pajamas while drinking wine. She firmly believes in the power of fluffy books, long walks in the woods, and that there's no such thing as too much coffee.