The Summer of No Attachments: A Novel by Lori Foster On Sale Date: June 22, 2021 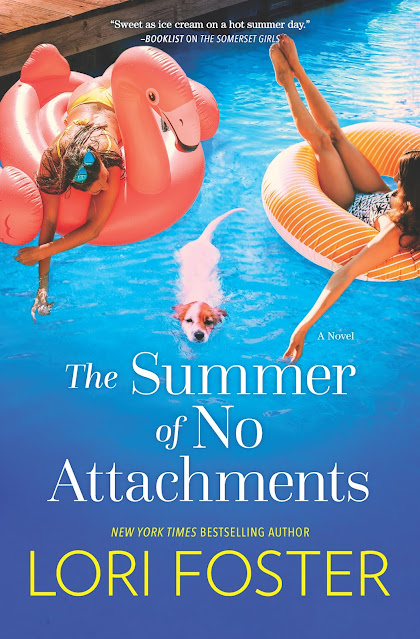 From New York Times and USA TODAY bestselling author Lori Foster comes the heartwarming story of two best friends who cross paths with a pair of new-in-town brothers with one angry little boy in tow. A standalone story of second chances at life and love, with found family and rescued animals, perfect for fans of Jill Shalvis, Sarah Morgan, and Lori Wilde.

Summer flings with no strings mean nobody gets hurt.

At least, that was the plan…

After putting the brakes on her dead-end relationship, local veterinarian Ivey Anders is ready to soak up this summer on her own terms. The way she sees it, no dating means no disappointment. Why complicate life with anything long-term? But when she meets Corbin Meyer—and his troubled young son, Justin—Ivey’s no-strings strategy threatens to unravel before she can put it into practice.

Trust doesn’t come easy for Ivey’s best friend, Hope Mage, a veterinary-clinic assistant who’s affected by an incident that’s colored every relationship she’s had. Though Hope’s happy for Ivey, she can’t quite open her own heart to the possibility of love. Not just yet… Maybe not ever. Soon, however, she’s faced with a dilemma—Corbin’s older brother, Lang. He’s charming, he’s kind…and he may just be the reason Hope needs to finally tear down her walls.

And as the sweet summer months unspool, the two friends discover love won’t give up on them so easily.

Momma Says: 4 stars⭐⭐⭐⭐
What happens when you swear off romance? Naturally, that's when romance finds you. Funny enough, that's exactly how I met my own husband. So, I was kind of rooting for Ivey and Corbin right from the start. Corbin's show-stealer of a son, Justin, just made it that much easier to want to see this group as a family. There's also a second romance with Hope and Lang, so this is really more of a story about family with romance tossed in. Lori Foster has a writing style that pulls you in from the very beginning, and her wonderful characters and setting keep the pages turning. The Summer of No Attachments turns into the summer of all the attachments, and this family story of friendship, love, healing, and learning to trust is the perfect summer read. It's full of feels and absolutely loaded with heart.
🞿🞿🞿🞿🞿

Ivey Anders shoved back a wayward curl and gently secured the dog against her body so it couldn’t move while her tech, Hope Mage, carefully clipped away the twisted wire. The poor thing, a stray by the looks of it, had gotten itself tangled pretty tightly and one hind leg was in bad shape. Ivey wanted to get it to the clinic where she could properly assess the damage.

Mud caked the fur, making it difficult to find any other injuries just yet, but there was one astounding fact Ivey couldn’t ignore.

Behind her, the homeowner groused that the dog had likely been stealing eggs from his chicken coop.

Voice calm, temper mostly in check, Ivey said, “You didn’t hesitate to call me, did you, Marty?” It was well-known that Marty was not a fan of dogs, or cats for that matter, and mostly considered them a nuisance. However, they’d come to an agreement some time ago. Marty, who owned a fair amount of wooded acreage, was supposed to call her if a stray showed up, and she, as the local vet, would take care of the “problem” for him.

Laura, his wife, was quick to say, “I called.” Defiant to Marty, she added, “Soon as I heard the poor thing, in fact.”

Which didn’t mean much. The animal might have been there for hours. Possibly more than a day, though Ivey couldn’t bear the thought of that.

“She’s pregnant, you know.” Refusing to take her eyes off the dog and unwilling to raise her voice since it might frighten the animal more, Ivey said, “If she took an egg, it would have been from starvation—and you already know I would have compensated you for it.”

Affronted, Marty grumbled, “I wasn’t worried about one egg, just don’t want to lose my chickens.” He cleared his throat. “If it helps any, I was out here this morning and she wasn’t caught then. Afternoon I watered my garden, and that’s why there’s so much mud. So I doubt she was hung up there more than a few hours.”

The fist around Ivey’s heart loosened just a little. “That helps tremendously, Marty. Thank you.”

More times than she could count, Ivey had taken on problems with stray animals who needed special love and care. It didn’t matter that she’d been working as a veterinarian for years now, seeing all manner of hurt, neglected or just plain ill animals. She still loved them all, and when one hurt, she hurt with it.

“No thanks necessary,” Marty complained, his tone gruff with insult. “Not like I’d let an animal suffer.”

Ivey had a feeling their definitions of suffer varied a bit, but she realized this mattered to him, and she was too grateful to quibble so she just nodded.

Almost got it,” Hope murmured, and with one last clip, the wire loosened. “There.” Fingers gentle, she disentangled the dog’s leg, exposing a painful wound.

Ivey murmured to the small animal all the while, cooing softly, petting and holding her secure. The second she was able to sit back on the muddy ground, she pulled the dog into her lap. With her face close to the top of the dog’s head, she whispered, “There now, that’s better, isn’t it? We’ll get you all fixed up, I promise.”

“Here.” Slipping off her zip-up hoodie, Hope offered it to Ivey to wrap around the dog. “Do you want me to get the carrier?”

Busy swaddling the dog, careful not to jar her, Ivey shook her head. “She doesn’t weigh more than ten or eleven pounds. I’ll carry her to the truck and we’ll see how it goes.” Feeling mud seep into the seat of her pants, she realized she couldn’t get up without letting go of the dog. Lifting a brow at Hope, she said, “A little help?”

“Oh sure.” Hope caught her under one elbow, and Laura hurried forward to take the other, giving her the leverage she needed.

Marty stepped back to avoid getting muddy.

Carefully, the two women got Ivey on her feet. The thick mud was heavy on the seat of her pants, dragging on her stretch jeans that had loosened throughout the day. At least her rubber boots wouldn’t be ruined. Since they treated all sorts of animals, including those on farms, she and Hope each kept a pair at the clinic.

“Let’s go.” Plodding forward, Ivey led the way to the truck. Halfway there, the dog started panting. Concerned, she hastened her step, not at all worried about getting mud on the truck seats. “No need for the crate. Just get us back to the clinic.”

Picking up on her angst, Hope ran around to the driver’s side and got the truck on the road in record time. “Everything okay?”

“Not really, no. Something’s wrong.”

Poor Hope. A sick cat had kept them an hour past closing, and then Marty had called… “I’m sorry.” Ivey barely took her gaze off the stressed dog. “Do you think you could assist me at the clinic?”

“Of course I will! You don’t even have to ask.” Frowning, Hope muttered, “Did you think I’d drop you off with a dog in distress? Tell you good luck?” She snorted. “Have I ever done that?”

She and Hope were close enough that Ivey knew she’d inadvertently insulted her. “No, you haven’t. But it’s Friday night after a very long day.”

“What a sad situation for us both.” Despite her worries, Ivey chuckled. “Most women would have plans, and yet we never do.”

Ivey made a face. “Lot of good that does me.” Likely Geoff was settled on the couch already, watching sports or playing a video game. The excitement had left their relationship a long time ago, so she doubted he’d even notice her absence.

For her part, Hope never dated. That bothered Ivey a lot, but she loved Hope enough that she would never pry.

Smiling at her friend, Ivey said, “I’m glad I won’t have to do this alone.”

“Not ever,” Hope vowed. “Even if by some miracle I ever do have something worthwhile lined up for the weekend, I’d still be here for you, okay?”

Her friendship with Hope meant so much more than any other relationship Ivey had, including her lackluster romance with Geoff. “Smartest thing I ever did was hire you.”

“I’m so glad you did,” Hope whispered. “Otherwise we might not have become friends, then where would I be?”

“Let’s just agree that we’re better off together.” Though Ivey was ten years older than Hope, they’d still hit it off from the start, meshing together as if they’d been lifelong friends. Where Ivey was take-charge and sometimes a little too outspoken, Hope was an intent listener with an enormous heart.

Ivey often wanted to challenge the world, and Hope, sadly, wanted to hide from it.

Or more accurate, she wanted to hide from any interested men.

Hope had an affinity with animals, plus a gentle but sure touch. She was never squeamish, but she exuded sympathy. Ivey valued her. The clients loved her. And the animals trusted her.

Unfortunately, they were still five minutes away from the clinic when the dog went into labor. “This is definitely happening,” Ivey said, doing what she could to make the animal comfortable.

Leaning closer to the steering wheel, Hope drove a little faster. “Be there soon.”

They’d barely gotten in the door when her water broke. Hope ran ahead to prepare an area, moving with practiced ease as she opened an already cleaned kennel and set up a whelping box, then filled it with bedding material. The box had three tall sides to contain the coming puppies, and one low side for the mother to step out for food and water.

Knowing Hope had it in hand, Ivey began cleaning the dog as quickly and efficiently as possible. She managed a cursory job, removing the worst of the mud, when Hope rejoined her. “We’re all set.”

“With luck we’ll have enough time to clean and wrap her leg before she gives birth.” Usually that happened within two hours after the animal’s water breaking, so they didn’t have a minute to spare.

A day that had already been long just turned entirely endless. 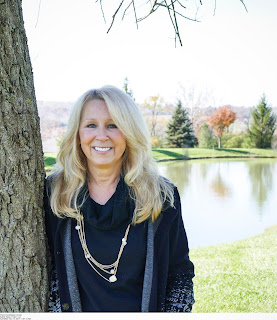 Since first publishing in January 1996, Lori Foster has become a New York Times, USA Today, and Publisher’s Weekly bestselling author. She lives in Central Ohio where coffee helps her keep up with her cats and grandkids between writing books. For more about Lori, visit her website at www.lorifoster.com, like her on Facebook or find her on Twitter, @lorilfoster.