A Brambleberry Summer
by RaeAnne Thayne 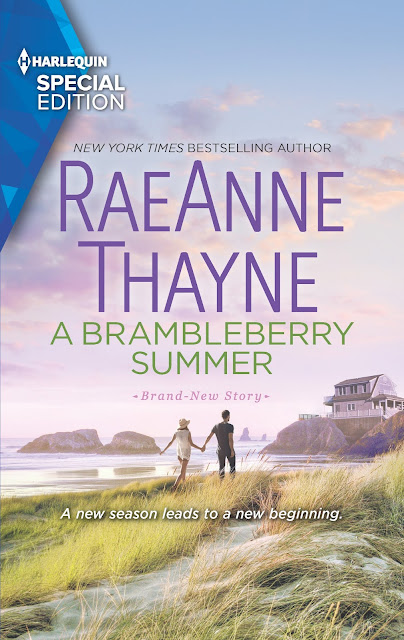 Will the secrets of her past…

Prevent her from having the future she’s always wanted?

Rosa Galvez’s attraction to Officer Wyatt Townsend is as powerful as the moon’s pull on the tides. But with her past, Rosa knows better than to act on her feelings. When Wyatt and his adorable son become Brambleberry House’s newest tenants, Rosa finds her resolve slipping. Her solo life slowly becomes a sun-filled family adventure—until dark secrets threaten to break like a summer storm.

Add A Brambleberry Summer to your Goodreads!

Momma Says: 4 stars⭐⭐⭐⭐
I've read a couple of RaeAnne Thayne's charming books, and somehow, I keep managing to come in at the middle or end of a series. Thankfully, this one, like the others I've read, works as a standalone. And I'll just go ahead and say that now that I've been introduced to this world, I'll need to go back and read the first 4 books. This one is an engaging romance with secrets, so of course, we have characters circling those things they want to keep hidden, and of course, they're gonna come out anyway. In that, it was predictable, but that didn't stop me from turning those pages. I thoroughly enjoyed Rosa and Wyatt's romance as Wyatt's son, the sweet dogs, and various other characters that come and go. It's a quick read, so A Brambleberry Summer is great for whiling away an afternoon or day at the beach.
🞿🞿🞿🞿🞿

Now that the deed was done, Rosa was having second, third and fourth thoughts about Wyatt Townsend moving in downstairs.

Why had she ever thought this would work?

That evening as she pulled weeds in the backyard after leaving the store, she had to fight all her instincts that were urging her to call up Carrie right now and tell her she had made a mistake. The apartment was no longer available.

“There is no law against changing your mind, is there?” she asked out loud to Fiona, who was lying in the grass nearby, watching butterflies dance amid the climbing roses.

The dog gave her a curious look then turned back to her business, leaving Rosa to sigh. She yanked harder at a stubborn weed that had driven deep roots into the ground.

She would do nothing. She had given her word and could not back out now. Integrity, keeping her word, was important. She had learned that first from her own mother and then from her adopted parents.

Lauren and Daniel Galvez were two of the most honorable people she knew. They would never think of reneging on a promise and she couldn’t, either.

Yes, Wyatt made her extremely nervous. She did not want him moving in downstairs. But she had given her word to his sister. End of story.

Because of that, she would be gracious and welcoming to him and to his sweet son.

Thinking about Logan left her feeling a little bit better about the decision. He was a very adorable boy, with good manners and a ready smile.

It was not the boy’s fault that Wyatt made her so nervous.

She had almost talked herself into at least accepting the new status quo, when an SUV pulled up to the house a half hour later.

Fiona lifted her head to sniff the air, then rose and hurried over to the vehicle to greet the newcomers.

Rosa climbed to her feet a little more slowly, pulled off her gloves and swiped at her hair before she headed for the vehicle. She might be accepting of her new tenants, but summoning the same kind of enthusiasm her dog showed so readily would be a stretch.

When Rosa reached the vehicle, Logan was opening the back door and jumping to the ground, his little dog close behind.

Fiona barked a greeting, then leaned in to sniff the newcomer, tail wagging. The Townsends’ dog sniffed back, and a moment later, the two were circling each other with joy.

At least Fiona was happy to have them here.

“Hi.” The boy beamed at her, showing off a gap in his teeth that she found adorable.

“Guess what?” he said. “We’re moving into your house! Dad says we can stay here until our house is done and I’ll have my own bedroom and won’t have to sleep in Aunt Carrie’s sewing room anymore.”

“This is so wonderful, no?” She smiled down at him, trying not to pay any attention to his father walking around the vehicle, looking big and serious and intimidating.

“What is the name of your dog?”

“I never doubted it for a minute,” she assured him. “Hello, Hank.”

She reached down to pet the dog, who responded by rolling over to have his belly scratched. Rosa loved him immediately.

“This is Fiona. She is also very nice.”

Wouldn’t it be lovely if she only had to deal with the boy and the dog? Unfortunately, the boy had a father. She had to say something to Wyatt, at least. Bracing herself, she lifted her attention from the two dogs and the boy, and faced the man who always looked as if he could see through her skin and bones into her heart, and was not convinced he liked what he saw.

New York Times bestselling author RaeAnne Thayne finds inspiration in the beautiful northern Utah mountains where she lives with her family. Her books have won numerous honors, including six RITA Award nominations from Romance Writers of America and Career Achievement and Romance Pioneer awards from RT Book Reviews. She loves to hear from readers and can be reached through her website at www.raeannethayne.com.