How to Win the Surgeon's Heart
by Tina Beckett 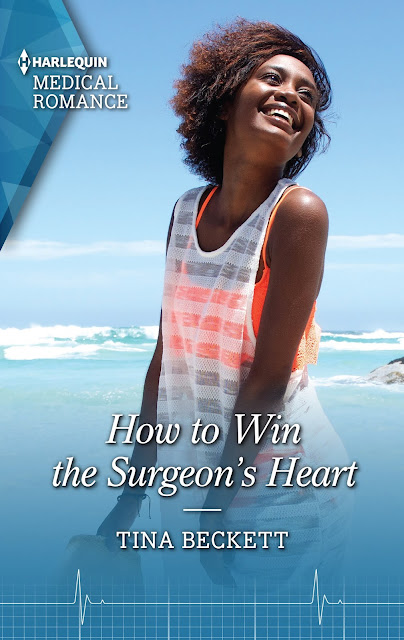 Things are heating up…

…in their Caribbean paradise!

For Dr. Nate, work is everything. Without him, his renowned hospital wouldn’t exist! Now he’s ready to step up to the plate—again!—as nearby St. Victoria Hospital faces a staff shortage. Surgeon Sasha is beyond grateful for the help, but she’s not so sure about Nate… Her heart’s been broken by wealthy and far-too-attractive men before! Can Nate prove to Sasha he’s different?

Add How to Win the Surgeon's Heart by to your Goodreads!

Buy How to Win the Surgeon's Heart by Tina Beckett!

Momma Says: 4 stars⭐⭐⭐⭐
How to Win the Surgeon's Heart is book one in a four-author series. It's also the first medical romance I've read in quite some time. If the rest of the books are as engaging as this one, it won't be my last in the series or in medical romance.
This is a quick read, so expect the romance to run quickly as well. That said, it's not so fast that I would consider it instalove, but it was kind of refreshing to see two people with such serious careers fall as fast as this couple. Nate and Sasha are likable and easy to root for. Sasha has some trust issues, but they're understandable, and she and Nate just fit so well together. The story is predictable as far as romance goes, which is rather comforting if you're looking for a bit of escapism, and given the setting, it's great for a beach read as you're soaking up some sun.
🞿🞿🞿🞿🞿

Nate Edwards stood on the tarmac, a tiny cloth doll clutched in his hand, awaiting the Medicine Around the World plane that would whisk him away from Saint Victoria and the aftermath of the hurricane that had wreaked havoc on the small Caribbean island. His thumb rubbed across the doll’s rough cloth, trying not to picture the tearstained eyes of her parents as they presented the gift to him. But their faces were forever burned into his memory. As was the dark-haired child who had been so very sick. And yet she’d managed the tiniest of smiles for him. With the island’s hospital obliterated by the fury of the storm, there had been little hope of saving her.

But God, how he’d wanted to. How he’d fought for her.

The phone in his pocket pinged.

Hell. His team had had only the most rudimentary supplies to work with during their stay. How, then, could cell phone signals still get through?

He pulled the phone out of his pocket, glad he’d charged it before packing for the trip home.

His mom’s name appeared at the top of the screen.

Glad you’re coming home today. We have a big surprise waiting for you! Your father and I can’t wait for you to see it.

A sense of dread filled his gut. He’d hoped by coming to the island he could circumvent their plans and buy himself a little more time to explain things to them. And then there was Tara, who had been hinting about settling down once he finished specializing. Except so much had changed. He tucked the doll under his arm as a bead of sweat rolled down his temple. He typed back.

Please don’t do anything until I get there.

He had no idea how he was going to tell them that he had no intention of joining their practice. After his trip to Saint Victoria—which they hadn’t approved of—the last thing he wanted to do was practice plastic surgery on the rich and famous.

One of his colleagues came up beside him. “Nate, we just got the results back on your patient’s mystery illness.”

Too late. Marie had already passed away. Still he forced himself to ask. “What was it?”

“Schistosomiasis. It must have damaged her liver and intestines beyond repair. That’s why she was so jaundiced. She had to have had it for a while.”

A parasite found in water had killed her? He closed his eyes. That possibility had never even crossed his mind. They’d had to send samples via water courier to a neighboring island, but he’d known in his heart it was too late. It should make him feel better to know there was nothing he could have done. Instead he just felt…empty. And now he had to go home and face his parents and Tara.

He forced himself to meet the eyes of his colleague. “Thanks for letting me know.”

“You’re welcome.” Peter clapped him on the back. “Not your fault.”

What else could he say?

Just then his phone pinged again, the screen lighting up and drawing his attention to the words that were printed there.

Three smiley faces appeared at the end of the phrase.

She was right. It was already done. All of it.

A three-time Golden Heart® finalist, Tina Beckett is the product of a navy upbringing. Always on the move, her travels eventually took her outside of the United States, where English reading material was scarce. Her supply of books eventually ran out, and she started writing her own stories, fashioned after the romance novels she'd loved through the years. She finished that first book and moved on to the next. After the fourth manuscript, she realized there was no going back…she was officially a writer.

When not in the middle of her latest book, Tina enjoys crafting stained glass panels, riding horses and hiking with her family. Fluent in Portuguese, she divides her time between Brazil and the United States and loves to use exotic locales as the backdrop for many of her stories.