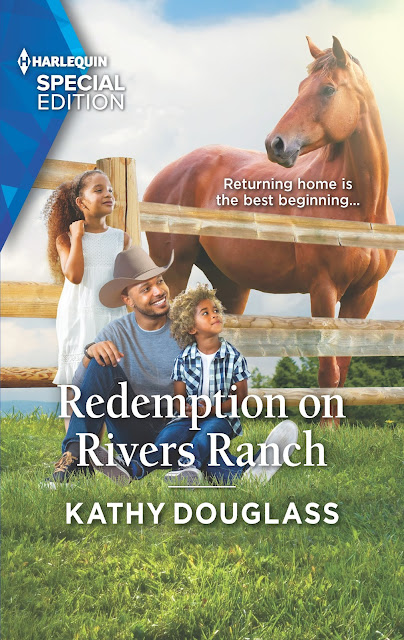 The return of his childhood friend

leads to the fresh start he never expected

Horse rancher Carson Rivers has his own emotional demons. There’s no place in his life for a divorced single mom pulling at his heartstrings. But when Gabriella Tucker and her adorable children move next door—the place of her favorite childhood memories—Carson’s tempted to help the heart-guarded beauty make more adult memories. Maybe Gabriella and her kids are the healing balm he’s been yearning for…

Add Redemption on Rivers Ranch to your Goodreads!

Momma Says: 4 stars⭐⭐⭐⭐
Redemption on Rivers Ranch is the 9th book in Kathy Douglass's Sweet Briar Sweethearts series and the third that I've read. I came in at book 7, and at this point, it's fair to say that Douglass has me hooked on these sweet and heartfelt romances. This one is a second chance romance with a cowboy and single mom, so I was all in just from reading the blurb. The story did not disappoint. Carson and Gabriella each have some things to work through, but they also have great chemistry and they're just good for each other. Gabriella's sweet kiddos add another layer to the heart of this one, and Douglass creates such wonderful characters that you can't help but be completely invested in their lives. This sweet romance is everything I expected from this author and a reminder that I really need to go back and check out the earlier books in the series. All in all, I'd say this slow-burn love story is perfect for a weekend or vacation read.
🞿🞿🞿🞿🞿

Discovering the truth about his father had been a shock, one Carson had only begun to get over. He couldn’t believe the father he’d idolized as a child, the father who’d held Carson in front of him on a horse as a toddler and who’d taught Carson everything he knew about ranching, had taken another man’s life. It was impossible to reconcile the two sides of his father. Losing Raven had been another staggering blow, knocking him off his center.

Before all of this came to light, Carson had been a successful horse trainer. He’d worked with previously abused animals as well as teaching horses to accept the saddle. He’d branched out and begun giving riding lessons to local kids. He’d enjoyed it as much as they had and business had begun to take off. But then a whisper campaign had started. Rather than wait for his students to back out, he’d closed the school. Besides, dealing with the fallout from his father’s actions and running the family’s cattle ranch had left him little time for anything else.

Luckily a forensic audit revealed that the business operations were 100 percent legal and aboveboard, so Carson had been able to keep running it with a clear conscience. Which was good, considering the ranch employed over two dozen people, many of whom supported families.

Lately he’d been toying with the idea of restarting his riding school, but something held him back. Would people really trust him to teach their kids? His reputation had been impeccable before, but being the son of a killer scuffed up the shine. At least to hear some people tell it.

Did he need the pain and aggravation? He had plenty to keep him busy.

He passed his neighbor’s house and automatically glanced at it. He’d promised Mrs. Johnson that he’d keep an eye on it when she moved to Willow Creek. She’d been considering putting it on the market but hadn’t made up her mind yet. She said she liked knowing the house was there in case she got tired of her new lifestyle. It wasn’t a problem for him. Mowing her lawn was easy enough and oddly soothing. She only had a handful of acres and he had a riding mower, so it didn’t take much time.

He slowed. Lights were blazing in the house. No one was supposed to be there.

Carson considered calling the sheriff but decided against it. Only the world’s worst criminal would turn on every light in the house and hope nobody noticed. He’d assess the situation and go from there.

Pulling into the driveway, he noticed an SUV with out-of-state license plates. He peered inside. Empty. Mrs. Johnson had given him a key to the house, so he headed up onto the porch, opened the door and stepped inside.

Apparently whoever was inside had made themselves at home. They’d uncovered the furniture and dropped suitcases and backpacks by the stairs leading to the upstairs bedrooms. Loud music was blaring from the back of the house. Someone was singing a popular song at the top of her lungs. The fact that she was nowhere in the vicinity of the right key didn’t stop her from singing with gusto. Her attempt to hit a high note pierced his ears and propelled him forward if only to save his hearing.

What in the world was going on here?

Mrs. Johnson would have told him if she’d sold or rented the house. She hadn’t mentioned it when they’d spoken a couple of weeks ago. And the gossips of Sweet Briar would have said something. He might not hang out in town any longer, but his employees did. One of them would have told him if they’d heard anything about his closest neighbor.

The woman laughed and the sound struck a chord inside Carson. Something about the sound stirred a distant memory inside him, awakening a long-forgotten feeling. He silenced the echo, focusing on the matter at hand.

The intruders were so wrapped up in each other that they hadn’t noticed him yet. He twisted the knob on Mrs. Johnson’s ancient radio, silencing the music, and then cleared his throat.

Kathy Douglass came by her love of reading naturally - both of her parents were readers. She would finish one book and pick up another. Then she attended law school and traded romances for legal opinions.

After the birth of her two children, her love of reading turned into a love of writing. Kathy now spends her days writing the small town contemporary novels she enjoys reading.

Kathy loves to hear from her readers and can be found on Facebook.