What Happens in Miami...
by Nadine Gonzalez
Available on June 29 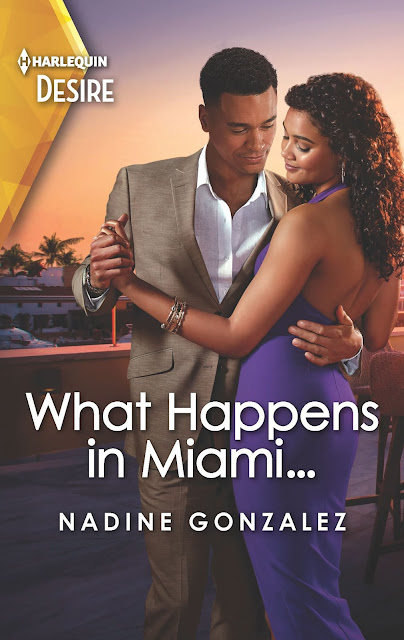 When a man on a mission is derailed by a beautiful woman, will one night ever be enough? Find out in this Miami Famous novel from Nadine Gonzalez.

Will one night be his undoing?

Alessandro Cardenas isn’t stepping out on the Miami art scene only for the hottest parties. Someone is forging his late grandfather’s paintings—and he’s determined to uncover the culprit. But when he crosses paths with gallerist Angeline Louis, the boundaries between mystery and seduction become blurred. Does Angeline suspect his ulterior motives…even as she surrenders to his kisses? Does she have secrets of her own? Or can Alessandro trust that their once-in-a-lifetime connection is real?

Add What Happens in Miami... to your Goodreads!

Buy What Happens in Miami... by Nadine Gonzalez!

Momma Says: 4 stars⭐⭐⭐⭐
What Happens in Miami... Even the title sounds fun, and it is. This is a romance with engaging characters, witty dialogue, and some swoon-worthy moments. But that's not all it is. Nope, we also get some intrigue in the art world, and Nadine Gonzalez gives us a satisfying mystery and a satisfying romance, and it's all done in a story that can easily be read in an afternoon. This is the second Miami Famous novel, but coming from someone who hasn't read the first one, I'd say this works just fine as a standalone. The story is well written, the couple is easy to root for, and we even get to "see" a bit of Miami along with the characters.
🞿🞿🞿🞿🞿

Angel checked her phone for the time. Only five minutes had passed. She had to chill out—famous people kept regular people waiting all the time.

Her trained eye zeroed in on the artwork. The space was, at its core, a gallery showcasing the homeowner’s eclectic pieces, all periods and trends colliding. She went over to a pair of framed paintings on a far wall. One was of a red apple hanging from a tree branch. The other was of a woman sleeping in a garden. She was naked if you looked past the strategically placed fig leaf. Angel was trying to decipher the artist’s signature when she heard the blunt sound of bare feet on tile. She glanced over her shoulder.

There he was, standing motionless by the sliding glass doors that opened onto a terrace. Whatever remained of the day’s sunlight spilled onto his broad, bare shoulders. He was practically naked—if you looked past the damp swim trunks, which wasn’t hard to do.

Tight and trim, he had the body of a lifelong swimmer. And it seemed to Angel that he had just emerged from the sea. His chest and limbs, sculpted and defined, glistened with water. His wavy black hair, cut close to the scalp, glistened. His bronze skin, touched by sunlight, glistened. With all that glistening sparkle, it was disquieting to meet his blank expression. His handsome face was impassive. From brow line to jawline, broad nose to full mouth, he gave nothing away. Was he perplexed to find her here? He’d been expecting Justine. Had anyone warned him?

But a sheepish grin quelled her fears.

“Sorry, I was expecting…” He paused to slip on a rumpled white shirt. “They said your name was Angel and I figured…”

He figured she was a man. Common mistake. She’d gone to school with at least three guys named Angel. To set the record straight, she stepped forward and introduced herself properly, business card and all.

He took the card and ran his thumb over the gallery’s embossed logo. Under his breath, he repeated her name. “Angel.” Why that moved her, she couldn’t say. Then he introduced himself. “Alessandro Cardenas.”

She would have liked to say: I know who you are. But that wasn’t technically true. She knew his name, age and ethnicity: Alessandro D. Cardenas, thirty-two, Cuban American. She’d seen most of his movies, including Shadows Need Light, the indie film for which he’d won an Independent Spirit Award, a Golden Globe, and an Oscar for best supporting actor. She was familiar with the brands he promoted, his political leanings, and she could name a few of his famous exes. He was a sex symbol, a social media star and a darling of the critics, in that order. And, it seemed, he was a serious art collector. That was a lot to know about someone you’d never met. More than she knew about her next-door neighbor.

“A pleasure to meet you, Mr. Cardenas.”

Nadine Gonzalez was born in New York City, the daughter of Haitian immigrants. Eventually, she moved to Miami, Florida, and fell in love with the people, weather, and lifestyle. She started her first novel while in law school and her modern romances reflect this vibrant city and unique mix of cultures.

Nadine lives with her Cuban American husband and their beautiful son. For more visit her website: www.nadine-gonzalez.com