✱✱Book Review✱✱ Secret Nights with a Cowboy by Caitlin Crews 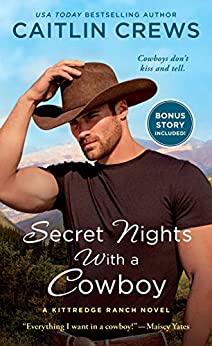 USA Today bestseller Caitlin Crews returns to Cold River, CO, and cowboys, with an emotional second chance romance in Secret Nights with a Cowboy, the stunning first installment in her new Kittredge Ranch series.A man holding on...Riley Kittredge has always known exactly what he wanted. His land, his horses. His woman. He met and married Rae Trujillo far too young, and their young love combusted right after they said their vows. But their passion has never managed to burn itself out. Yet when Rae shows this time, it's not a night of pleasure she demands, but a divorce.A woman letting go...Rae should have moved on a long time ago. She knows she and Riley just don't work. They might make great lovers, but that doesn't make a marriage. And now Rae wants a new life, complete with a baby. But when her husband offers to be a father, to give her the family she's always secretly desired, she and Riley will both have to face demons from their past—and choose love over fear at last.“Loaded with charming characters [and] wit….will win the heart of any romance fan.”—Publishers Weekly (starred review) on A True Cowboy Christmas

Momma Says: 2 stars⭐⭐
A second chance cowboy romance and the first in a new series by Caitlin Crews. Did I mention there's a cowboy? I do love a cowboy, and that cover is terrific. So, I was all set to dig in and swoon a bit, and there was some swooning, but then there was an equal amount of eye-rolling and irritation. Riley and Rae really needed a good shake - both of them but mostly Rae. The further I got into the book, the less I liked Rae. She's a woman who hasn't grown up enough to be married. Yeah, I get that she had a secret, but this one dragged on much too long and relied way too much on Rae's silence, which is pretty much miscommunication. I'm really not a fan of miscommunication. Then we have Riley, who I liked but was disappointed in the things he put up with (and I'll stop right there so I don't give it all away).
Anyway, I didn't realize that this series is a spinoff of another series by Crews, and given my feelings about the last couple of those stories, I shouldn't be surprised about this one. I think it's just a matter of me not meshing with this author, no matter how much I love sexy cowboys - an it's not you, it's me kind of thing. Whatever the reason, Secret Nights with a Cowboy wasn't the book for me.