Guns and Smoke by Lauren Sevier and A. Smith Virtual Book Tour 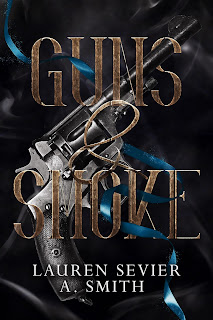 Guns and Smoke
The Fool’s Adventure Series
Book One
Lauren Sevier and A. Smith
Genre: Dystopian/Western Romance
Publisher: Lauren Sevier
Date of Publication: July 10, 2021
ISBN: 978-1734402346
ASIN: B08RW6JNGG
Number of pages: 364
Word Count: 134,000
Cover Artist: Stefanie Saw
Tagline: Life should be about more than just surviving.
Book Description:
In a world where safety is a luxury and honor is found only among outlaws, two people attempt to outrun dangers lurking around each corner and the tragedies that define them.
Bonnie is an outlaw on the run. Beautiful but dangerous; her dark past stalks her like the crater beasts that roam the desert. As the notoriously cruel outlaw Jones sends his henchmen to track her down and retrieve the gun she stole from him, Bonnie hopes she can stay one step ahead. Because if he catches her, a fate worse than death awaits.
Jesse always dreamed of leaving the farm to explore the ruins of the big cities he'd heard about his whole life. He just never imagined he'd be forced to flee after strange men burned down his rural mountain town and murdered everyone he loved. Responsible for his kid brother and searching for an uncle he's never met before, he isn't sure he can navigate the perils of life among con artists and thieves long enough to find him.
Their two paths collide as they find themselves thrown together on the adventure of a lifetime.
Together, they may just discover that life is about more than just surviving.

One small change in position and now each of my soft curves was pressed intimately against the tall, hard length of his unyielding body. His blue eyes blazed in the dim light of the alley, reading something on my face that urged him on. This was supposed to be my trap.

His hands were buried in my hair now, a thumb tracing over my cheek to land on my bottom lip. I knew what he wanted. Parting my mouth, I wrapped my lips around the pad of his thumb, my tongue flicking against it before sucking softly. A deep thunderous sound rumbled through his chest to shake me down to my bones. His hand in my hair slid to the back of my head, pulling my mouth closer to his. He wanted me to kiss him. He wanted this to be more than a transaction. He wanted me to want him back.

I brushed my nose against his, and he stilled. All other motion and sensation forgotten as his eyes landed on my mouth, inching closer to his. I drank in the taste of his breath, a faint echo of the taste of his lips from before. My head tilted to the side, and he brushed the hair away from my face to see me more clearly as I angled toward him. He swallowed down whatever desperate words were on the tip of his tongue, and I took his chin in my hand, mouths open and millimeters apart.

Lauren Sevier and A. Smith are longtime friends and co-authors from southern Louisiana. Guns and Smoke, their first joint publication, began as a “short” story after having too much wine on girl’s night.

Nine years later it is now the first novel in a Dystopian/Western Romance series.

The duo has plans to publish several series together in the future. A. Smith spends her time with her two rescue dogs and rescue cat surrounding herself with books and Labyrinth paraphernalia.

Lauren Sevier collects antique tea cups and tries to stay sane, though as the mother of a toddler she fails brilliantly most days. She also has a growing collection of crowns and tiaras and likes to act silly on TikTok. Look for more thrilling novels from The Fools Adventure series in the future! 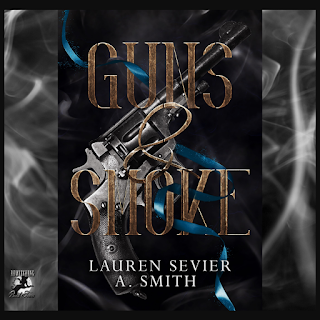