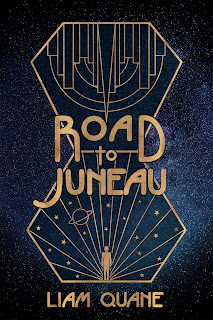 Road to Juneau
Liam Quane
Genre: Sci-fi, Fantasy
Publisher: Beaten Track Publishing
Date of Publication:  18 May 2021
ISBN Hardcover: 978-1-78645-473-7
ISBN Paperback: 978-1-78645-452-2
ISBN eBook: 978-1-78645-453-9
ASIN: B08V51WV9M
Number of pages: 330
Word Count: 109,038
Cover Artist: Holly Dunn
Tagline: How was God supposed to defend Earth from the Monster, when the Monster knew Earth better than God ever could?
Book Description:
New York: two years after the Third World War. Humanity is rebuilding its cities brick by brick; the damage done to the people, however, is a lot harder to repair.
Dan Hardacre is one of those people. An aspiring stage actor and experienced draft-dodger, Dan struggles to find his place within the Utopic rebuild of New York City. When he’s not caught up with the duties of work, Dan lives a quiet life in mourning for his mother, Dyani, who went missing when he was a teenager.
One night, Dan experiences a vivid, terrifying nightmare that puts him right on the front lines of the war for which he dodged the draft; it ends with him facing Death itself in the form of a metallic, faceless humanoid creature that calls itself the Valkyrie. To investigate the reason behind his haunting experience, Dan seeks out a meeting with his estranged father, who reveals the startling truth about Dan’s dream: it wasn’t a dream.
With this newfound knowledge and the powers it brings, Dan makes it his mission to return to the scene of his nightmare. However, he soon comes to know that confronting the Valkyrie not only endangers him but the war-withstanding world he leaves behind.

8:08 a.m. That’s what my clock says as I burst out of my covers. I must have fallen out of bed again. I know this because I’m staring at it from the other side of my room. There was luck to this particular tumble, however: I’m only sixteen minutes behind! I wheeze as I lift myself up, kicking the sheets from my ankles like a half-swaddled baby. The same old tapping returns, persistent and loud, and I walk over to my ground-floor window, lifting it dramatically in an effort to shoo the seagull pecking at the pane. The blunt-billed bird squawks as it flaps away. I slam the window closed, keeping the cold morning air off my skin for a few more minutes.

My shower was lukewarm and my breakfast fictional. This is the best I can hope for on Tribute day at my place of work: Montage Tower. The building may be taller than most, but the work is still lowly. I lock my bedroom door out of an irrational precaution; my roommate is still upstairs. It’s his third day off this week, and it’s silent, but I know he’s awake because his door is slightly ajar. If anything were to disappear from my room, he would be blamed for it regardless, as either a successful thief or a failing watchdog. I collect my earbuds, phone, and wallet combo and silently make for the exit. As my door card reaches the scanner, a magazine bricks the window, launched from the top of the stairs where Sam now stands.

“Almost hit you, Dan!” he shouts down to me in his usual
excitable manner.

“What is it this time? I’m already late.” I almost don’t reply.

“Page twelve—the blue chaise longue!” He points at the once airborne catalog, which now sits crumpled in my hands.

“I’m not dragging a chaise longue home for you!”

“It’s not for me, it’s for Shanty,” he says, partitioning himself
from the blame.

I spin the catalog around and read the cover. “Scratchwork
Furrrnishings.”

“It’s only small—twenty-five by sixteen.” He holds his hands out
like a puppeteer.

“Can’t your hamster just sleep in your bed with you?”

“No. He has an erratic sleeping pattern.”

“Fffffine,” I reluctantly sputter, throwing the catalog onto the
floor in a sulk.

Sam giggles and retreats back into his lair of aspen shavings and
lavender. I finally scan my door card, which sounds a cheery beep of
freedom.

Do you remember the colors of your life? How it used to feel before you became responsible and independent? Everyone does, I guess. Three shades usually cocoon themselves around the memories: the Blue Stage, the Purple Stage, and the Gray Stage. I am at Gray and dreading what comes after. The Blue Stage is the oldest. It consists of the memories of when you were a child. An only child. Not specifically you, but me. I forget how to separate myself from the situation sometimes, Sorry. Anyway, my childhood could only be described as glowing.

Mom and Dad were always here for me, breakfast table mornings and dinner table evenings. They both worked interesting jobs, each excelling in a separate creative field. My mother was a software programmer; a good one too. The start-up she worked at grew from a hole in 5 the wall to an admired business. Similarly, my father was successful in his career as an architect, not of towering superstructures but of small, respectable buildings in which families could live happy lives.

Those homes are gone now. I was around thirteen years old when I realized I’d never heard my parents fight. In fact, I hadn’t seen any anger from them at all. Not toward each other.

Not about work, or money—something which we were never without. Eventually, as my teenhood set in, I attributed their constant state of bliss to a secret drug habit, hoping to one day join the gang. But I was wrong. I found this out soon after Purple reared its ugly head. My life as a teenager was a lot slower than when I was a kid, and that aforementioned blissful family atmosphere quickly started to crack. Dad’s work hours increased. Taxes were the same, but he wasn’t, not with the stress he carried to keep the family “secure.” The same could be said for Mom. The company she originally worked for was poached and absorbed into a much larger company named Hourglass Industries—the place that now owns the building I work in. I think I repressed the name of the original, probably for the best. 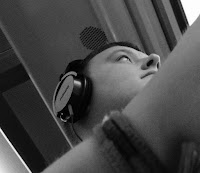 About the Author:
Liam Quane is a British filmmaker and author from the working-class town of Skelmersdale, Lancashire. After gaining experience making short films, writing screenplays and editing music videos, Liam turned onto a different storytelling venture in the form of novels. And, after reading six of them, he wrote his own in a hectic hail of key presses and dicey guesses. This bullheaded effort morphed into what would later be called Road to Juneau. It may be his first book, but he has more ideas for further bookcentric ventures. 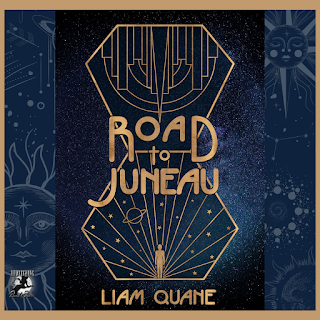