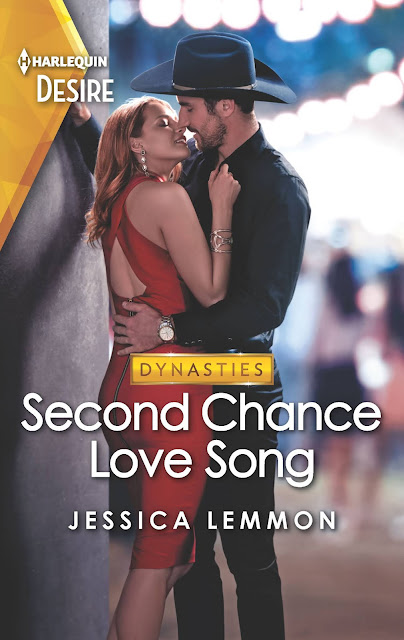 There’s no place like Nashville for discovering all the secrets your ex has been keeping—a Dynasties: Beaumont Bay novel by Jessica Lemmon.

He chose country music over the one who got away.

Country music star Cash Sutherland is too successful for his own good. Seen as a bad boy in need of redeeming, he and his label are doing all they can to revamp his reputation. They’ve even hired eager journalist Presley Cole, who’s ready and willing to print the cover story that will make both their careers. The only problem? She’s the woman he left behind, and she’s not ready to forgive him for breaking her heart…

Momma Says: 5 stars⭐⭐⭐⭐⭐
Second Chance Love Song is a perfect title for this book, and it sums it up nicely. Cash is the sexy country music star and Presley is the reporter looking for his secrets. Oh, and they were a couple in the past, back before Cash decided to walk away to chase his stardom. So, when they come face to face after so many years and the attraction is just as strong, it's a second chance for them. I'm a sucker for second chances, and when it's wrapped up in such a fun and engaging story as Presley and Cash's, it's easy to fall into the story. In this case, I fell into the story almost immediately and didn't look up until I'd turned the last page. Cash is a bit of a hard case, and there were times that he needed a good swift kick in the backside, but the more I read, the more I liked him, and he and Presley are just so good together. So, this second in the series is one of my favorite romance tropes, the couple has great chemistry, and the writing is everything I expect from Jessica Lemmon.
🞿🞿🞿🞿🞿

Presley, dressed smartly in a fuchsia skirt and floral-print blouse and a pair of peep-toe kitten heels, wrapped her folded hands around her knee to keep her leg from bobbing up and down like a sewing machine needle. She was overcaffeinated, thanks to a virtually sleepless night, but when inspiration had struck, she hadn’t wanted to waste a single second sleeping.

The smile she’d glued into place was starting to shake at the edges, so she coughed into her hand to give her mouth a rest. When her boss, Delilah, looked up at her again, Presley grinned anew.

Presley had longed to escape Florida for as long as she could remember. She’d always wanted to travel the world, visit other countries, meet new and interesting people. But traveling cost money, which had been in short supply. Instead she’d been stuck in Tallahassee as if an invisible force field was keeping her here.

When her boss announced a “friendly” competition for their branch of Viral Pop a month ago, Presley’s ears had perked. All she had to do was write an article that would go viral and grab lots of new eyeballs. The winner earned a pay-and-title bump—hello, Senior Staff Writer!—and a transfer to any of Viral Pop’s offices in the world.

Pres had practically foamed at the mouth from excitement. She’d been trying to come up with a winning idea over the last week and a half but nothing came. Until her drive home from work last night, when her ex-boyfriend’s song had come on the radio.

Cash Sutherland had left Florida a football star, and was now a country music superstar. Upon hearing his most popular song, a fresh idea had hit her like the title, “Lightning.” Out of nowhere and with enough force to split her in two.

So she’d sat up until 2:00 a.m. last night writing the proposal Delilah was reviewing this very second.

“This would require you to be out of the office,” her boss stated, her eyes traveling to Presley. Delilah’s usual brand of curiosity-slash-interrogation never failed to intimidate, but winning this promotion and the opportunity to escape Florida was Presley’s lifelong dream. She could handle a little intimidation.

“I’ve worked remotely before,” Presley replied. At home, but still. “I am very good at time management. Especially when it’s my own time. Or the time here at the office,” she was quick to add. “I value your time, as well. More than mine. More than anyone’s.” She pressed her lips together to keep from sounding desperate, the sticky gloss she’d swiped on this morning helping with that endeavor.

Delilah hummed, set her tablet aside and narrowed her eyelids. Then she dipped her chin. “What makes you so sure Cash Sutherland is going to tell you his biggest songwriting secret when he’s dodged that question from every reporter who’s spoken with him?”

Nervously, Presley licked her lips. She wasn’t at all sure Cash Sutherland was going to confess his biggest songwriting secret. Ever since “Lightning” hit the Billboard Top 100, scads of press had been trying to solve the mystery of whom the song was written about. Rumors were rampant. Article after article had named this starlet or that, this singer or the other, and really, given his copious dating history, it could be any or all of them.

A former job-hopper, Jessica Lemmon resides in Ohio with her husband and rescue dog. When she’s not writing super-sexy heroes, she can be found cooking, drawing, drinking coffee (okay, wine), and eating potato chips. She firmly believes God gifts us with talents for a purpose, and with His help, you can create the life you want. Learn more about her books at jessicalemmon.com.