The Marine's Mission
by Deb Kastner 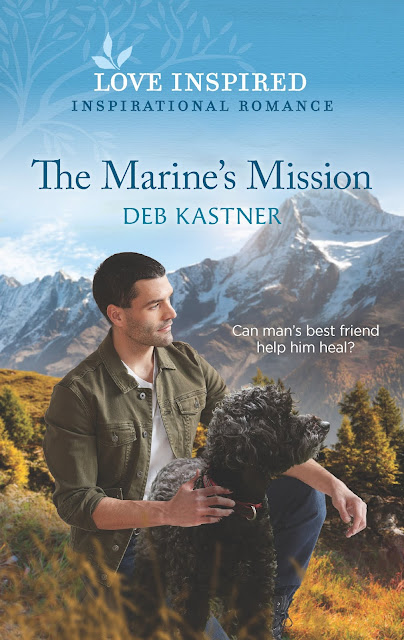 …until an unlikely match changes his life.

Wounded ex-marine Aaron Jamison always follows orders—and the assignment to take on a service dog is just that. Still, trainer Ruby Winslow is definitely barking up the wrong tree when she insists a beauty-parlor poodle is his perfect match. But Ruby and her clever canine are determined to melt the heart of this battle-hardened marine. And they'll teach him an unforgettable new trick—love.

Add The Marine's Mission to your Goodreads!

Momma Says: 4 stars⭐⭐⭐⭐
The Marine's Mission is an emotional read. Deb Kastner definitely knows how to keep a reader hanging on every word and she tempers the more emotional moments with humor and sweetness. Aaron is a tough nut to crack with the walls he's built around himself, but Ruby has plenty of determination to see this "mission" through to a happy conclusion. I liked both of these characters and it didn't take long to be rooting for them and for Aaron's "froufrou" dog, Oscar. I expected this one to tug at my heartstrings. What I didn't expect was how thoroughly charming it is. It's well written and works perfectly as a standalone even though it is 3rd in the Rocky Mountain Family series. I will say that after "meeting" a few of the secondary characters, I'm gonna have to go back and check out those first two books to find out their stories as well as watching for what comes next for this family.
🞿🞿🞿🞿🞿

“You should probably know I don’t want to be here.”

Those were the first words United States Marine Corps Sergeant Aaron Jamison blurted out to the ginger-haired woman who’d just approached him, welcoming him with a pretty smile and an enormous, dorky-looking black standard poodle standing at her side, both with curious gazes. As far as Aaron was concerned, her choice in froufrou dogs obviously said a lot about her, kind of like the movie stars who carried tiny pups around in their purses to show off to everyone.

This was the breed of dog she’d chosen to own, and she was supposed to be an expert? She was going to be his service-dog trainer, put him through the program, and his first impression was she was probably as fluff brained as her dog, not someone he wanted to be in charge of him. He’d been told to meet up with Ruby Winslow, his new contact at A New Leash on Love, and since she was standing out here in front of the building, waiting for him, he assumed this was she.

In general, he didn’t say much, and yet this time the moment he had stepped out of his truck, he’d put his foot in his mouth.

He’d blabbed exactly what had crossed his mind, and it wasn’t the greatest beginning for either of them.

Neither did it bode well for him when she immediately stopped in her tracks fast enough to make the dust cloud around her cowboy boots, sparks snapping in her light blue eyes as her gaze narrowed on him and her smile wavered. The black poodle stopped with her and stared up at her, curious as to her sudden halt.

He’d rented a truck from Denver International Airport to drive into the Rocky Mountains up to the small town of Whispering Pines, where Winslow’s Woodlands and the military service-dog program were located. The whole time he’d been thinking about how much he was going to hate the next four weeks and how he would rather be anywhere but here.

Every second was bound to be painful, both physically and mentally.

But in hindsight, he probably shouldn’t have said as much aloud, at least not until after they’d been formally introduced.

Ruby looked as if she were about to reply to his rude comment, but then she pinched her lips together, took a deep breath and apparently thought better of it.

“I just thought you should know,” Aaron continued, attempting to wind his way out of the knot he’d just firmly tied around his neck, “that although I have been given orders to show up and complete this program, I’m not exactly a willing participant here.”

He was a straight shooter, both literally as a sniper in Afghanistan and figuratively in the way he lived his life in and out of the marine corps. He didn’t say much, but when he did, he meant whatever words crossed his lips.

That said, he didn’t want to start a war with Ruby this early on in his new mission, even if what he spoke was the truth. He wasn’t here because he wanted to be. He didn’t even really want a service dog, although he wasn’t completely opposed to a tough-looking canine companion—a German shepherd, maybe, or a Belgian Malinois.

Not that what he wanted had ever once played into the situation. It didn’t. Not from the beginning. But that didn’t stop him from feeling angry and frustrated just thinking about having to endure the Veterans Administration’s direct orders. Of all the veterans they could have selected for the program…

Award-winning author Deb Kastner writes stories of faith, family and community in a small-town western setting.  Deb’s books contain sigh-worthy heroes and strong heroines facing obstacles that draw them closer to each other and the Lord. She lives in Colorado with her husband. She is blessed with three grown daughters and two grandchildren. She enjoys spoiling her grandkids, movies, music, reading, musical theater and exploring Colorado on horseback.