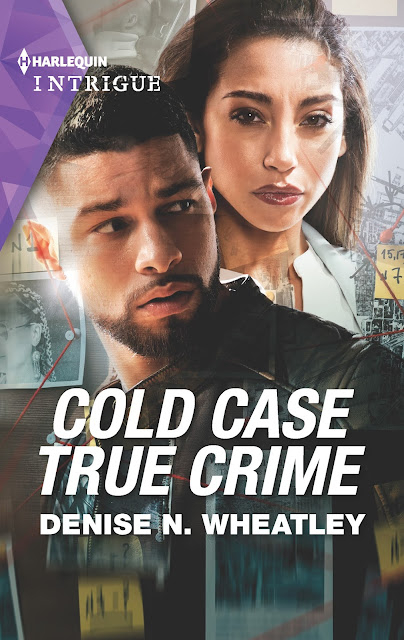 True crime is her beat.

But this cold case is personal…

Samantha Vincent has turned her fascination with true crime into a popular blog. When an old friend asks her to investigate a murder the police couldn’t solve, she begins to suspect that the cops want this case to go cold. Sam is confident she’ll catch the killer when Detective Gregory Harris agrees to help her, but everything changes when she becomes a target…

Momma Says: 4 stars⭐⭐⭐⭐
Cold Case True Crime is book 5 in the multi-author Unsolved Mystery series. The story is entertaining and suspenseful, and the characters are likable. Samantha finds herself in some sticky situations as she investigates a murder. She does have some help from Detective Gregory Harris, and the chemistry between them makes for an engaging romance. Denise N Wheatley blends the two sides of this tale very well so that both the suspense and the romance are allowed to shine without casting a shadow on the other one. Some things are a little over the top, but it is fiction, and believable or not, it's definitely a fun read.
🞿🞿🞿🞿🞿

Samantha Vincent flinched when the coffee shop door slammed shut behind her. She stared down the dark, vacant street in search of her car—she hadn’t realized she’d parked so far away.

The temperature had dropped severely since she’d arrived at the café. There was now a stinging chill in the night air. She set out toward the sidewalk, tightening her houndstooth-patterned scarf in an effort to block the wind as it whistled eerily past her ears.

Samantha had spent the day working on her popular true crime cold case blog, Someone Knows Something, and time had gotten away from her. By now, businesses were closed and most residents of small-town Gattenburg, Illinois, had retired for the evening.

A frigid breeze whipped through her golden-brown bob and blew open Samantha’s black wool peacoat, sending unsettling shivers throughout her entire body. But it wasn’t just the icy climate that had unnerved her.

She was still rattled by an email she’d received from Ava Jennings, an old high school friend whose family Samantha had grown close to after spending countless days at their home during her teenage years. In her message, Ava pleaded with Samantha to investigate her brother Jacob’s mysterious death, which police had just officially stated was cold with no leads.

Tree branches scraped against dim streetlights that barely illuminated the road. Samantha glanced down at the ground, her lone shadow a stark reminder that she was unaccompanied in the unnerving darkness. Moments like these brought on paranoid thoughts of all the unsolved cases she worked so hard to crack. Many of those victims found themselves in her exact same position seconds before their demise—isolated and vulnerable.

Samantha pushed those disturbing thoughts out of her mind and hurried along the pavement. Her feet ached in her high-heeled boots. But in spite of the pain, she clenched her jaw and fought through it, anxious to get off the desolate street and inside her car.

Just when Samantha’s convertible appeared in the hazy distance, the sound of screeching tires pierced her eardrums.

She stopped abruptly. The vehicle’s engine emitted a menacing roar.

Samantha spun around, almost losing her footing. Bright yellow headlights blinded her squinted chestnut eyes. She inhaled sharply, watching while the black sedan crept toward her.

She curled her hands into tight fists and took a step back, her lean legs quivering in the wind. Remembering the mini stun gun she’d slipped into her back pocket, Samantha pulled it out and contemplated making a run for her car. But she was too afraid to turn her back on the man she presumed was behind the wheel.

Denise N. Wheatley loves happy endings and the art of storytelling. Her novels run the romance gamut, and she strives to pen entertaining books that embody matters of the heart. She's an RWA member and holds a B.A. in English from the University of Illinois. When Denise isn't writing, she enjoys watching true crime tv and chatting with readers. Follow her on Instagram: @denise_wheatley_writer Twitter: @DeniseWheatley BookBub: @denisenwheatley Goodreads: Denise N. Wheatley