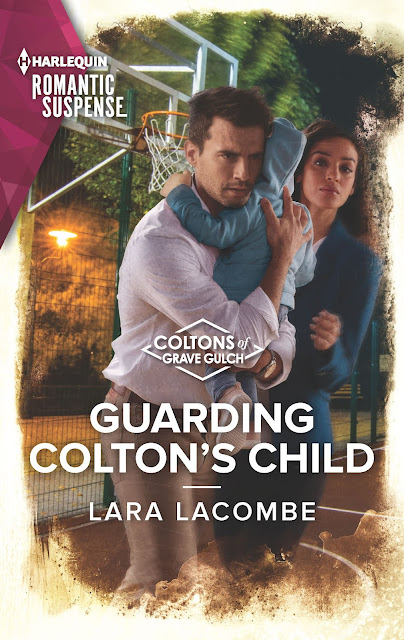 To keep her family safe

He’ll risk everything, even his heart…

After losing his family, Dr. Stavros Makris could never imagine trusting again. So when Desiree Colton rushes her toddler, Danny, to the ER, Stavros must keep things professional with mother and son. But then a kidnapper targets Danny, and Stavros lets down his guard, forging an unbreakable bond with Desiree. As sparks fly between them, they work against the clock to protect the little boy from a criminal closing in…

Momma Says: 4 stars⭐⭐⭐⭐
Guarding Colton's Child is an emotional romance with Stavros coming to terms with the possibility of love again after so much loss and Desiree desperately searching for Danny. And that search is the source of the suspense. This couple does have good chemistry even when one of them is determined to guard their heart. This is part of a series, but I didn't have any problem following the storyline on its own. There were a few things that indicated a history, things that I felt like I should've known, but it didn't hinder my enjoyment of the story. Stavros and Desiree are both likable characters and their circumstances certainly tug at the heartstrings. The author gives us an equally entertaining bit of tension-filled suspense, so both elements receive their fair share of story here. Romantic suspense is one of my favorite tropes, and this one made for a good little weekend read.
🞿🞿🞿🞿🞿

Stavros tapped his knuckles lightly on the door in announcement and entered the room. He was greeted by the sight of a woman sitting on the gurney, rocking back and forth as she held a boy in her arms. She looked up as he entered the room, and when their eyes met, Stavros felt a little shock jolt through his body.

He knew this woman. But how?

Feeling flustered, he frowned slightly as he studied her face, wishing he’d taken a look at the chart first. “Hi, I’m Dr. Makris. What’s going on tonight?” Even though the nurse had given him a report of the pertinent information, he always liked to have his patients, or their parents, tell their story again, so he could hear the tone of their voice and see their expressions. Sometimes, the way someone moved or what they didn’t say was just as important as their symptoms.

“Danny woke up about an hour ago with a high fever,” the mother said. “I tried to get him to drink water, but he refused. The night nurse at his doctor’s office said to bring him straight here.”

Stavros heard the fear in the woman’s voice; it was clear she was scared for her baby. Empathy swelled in his chest. He remembered all too well what it had felt like to hold a feverish child, to fret and worry over every little cough or sniffle. He’d thought his medical training would give him some much-needed perspective when it came to his daughter’s health, but if anything, the opposite had happened. He’d been so aware of the worst-case scenario, of all the things that could go wrong. He’d been the one to call the pediatrician for every little thing, his wife standing in the background trying to calm him down.

“Tell me about Danny,” Stavros said. He kept his voice level and calm, and walked Danny’s mother through the questions that would help him make his diagnosis.

She didn’t hesitate to answer him, and based on her detailed responses, Stavros could tell she was an attentive mother.

“All right,” he said. “Let’s see if your little guy will let me examine him.” Stavros already had a presumptive diagnosis in mind, but he always performed a physical exam to confirm his suspicions.

The toddler’s mother gently turned her son, and Stavros got his first good look at the boy’s face. “I know you!” The words flew from his mouth before he realized he was speaking.

Stavros realized he’d put his foot in it, but there was nothing to be done for that now. He nodded. “I…uh…I helped look for your son a few months ago, after he was taken from the hotel.”

“You did?” Stavros heard the relief in her voice, noticed the way her body relaxed now that he’d explained his reaction.

“Yeah. I joined a search party after my shift that night.”

I’m sorry I didn’t recognize you. I didn’t get a chance to thank all the people who helped look for Danny.”

Stavros waved away her gratitude. He didn’t want to tell her that he’d had to do it—he’d been driven by the memories of his own daughter’s kidnapping. As soon as he’d heard another child was in the same kind of jeopardy, he hadn’t hesitated. He’d jumped in his car at the end of his shift and headed to the hotel, needing to help in some way. Logically, he knew he’d been trying to save this boy the way he hadn’t been able to save his daughter. But at the time, he’d been ruled by emotions and the desperate desire to make a difference. Finding Danny wouldn’t bring Sammy back—he’d known that. But he wouldn’t have been able to live with himself if he hadn’t at least tried.

Lara Lacombe is a recovering research scientist turned college professor who now spends her days writing and wrangling a toddler.  She lives in Texas with her family and two entitled cats, and loves chocolate and her Crock Pot.  She uses Facebook to procrastinate--stop by Lara Lacombe Books if you'd like to chat!