So...You Want to Write a Book Tour and Giveaway 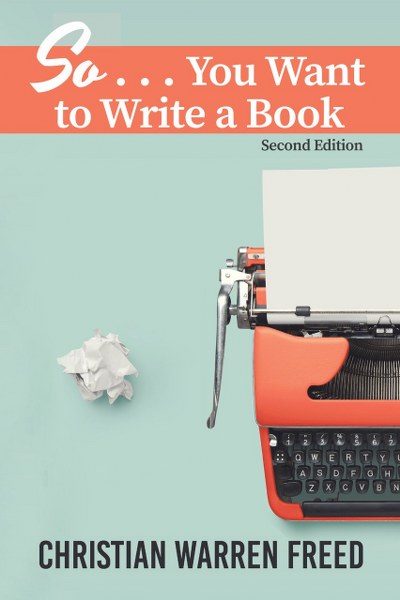 WANT TO WRITE A BOOK BUT DON'T KNOW WHERE TO BEGIN?
The plot—sketchy maybe—is in your head. Now, how do you pull it together into a book?
Christian Freed to the rescue with So . . . You Want to Write a Book, taking you on a helpful and entertaining trip from honing your idea all the way through to making your publishing decisions.
This is not your typical “how-to-write” reference book. Rather, it helps you think through your situations, shares ways to improve your writing, and prepares you for the inevitable author frustrations.
No two ways about it—after writing more than 25 books himself, Freed knows a thing or two. An award-winning, best-selling author of military fantasy fiction, Freed uses humor, real learning curve experiences, and practical wisdom to guide would-be writers via four easy-to-digest units (and yes, the E word is “edit"):
-- That Nagging Idea
-- Where the Magic Happens
-- The Dreaded E Word
-- Wrapping It Up in a Neat Little Bow
Though primarily focused on the art of fiction writing, So . . . You Want to Write a Book will also benefit nonfiction writers; either way, it’s a “from-the-head-to-the-page" thing.
So, are you finally ready to write the book that’s in your head? Start by reading this book!
Goodreads * Amazon

It was a dark and stormy night. Well, maybe it was, but that was so long ago I honestly don’t remember. What I do know is that I was very young—think 10th grade—and I spent hours cranking out page after page of what I was certain was going to be the next bestseller. See, I made the mistake of reading that Mary Shelley wrote Frankenstein when she was just 21 years old. Twenty-one! Anything she can do, I can do better. Right? Wrong.

I had been bitten by the horror bug and sought to create my own horror empire. The words flowed during those quiet hours after dinner and before (sometimes after) bed. I engaged with the characters, spinning an epic yarn of mayhem and horror. When I finished the rough draft, I quickly went about typing it up on my word processor. Don’t laugh. I may be dating myself, and some of you will run to Google to see what I’m talking about, but they were cutting edge back in the 19 . . . .

Anyway. The finished manuscript came in around 260 pages. A worthy effort, all things considered. I then did what any reasonable individual would do. I began to show it off. My mother (as always) thought it was the greatest story ever told. My English teacher thought it was so great that she nominated me for the coveted Student of the Month award. I went up on stage in front of the entire student body and received a medal for my efforts. A medal! I was on cloud nine. Invincible and ready to take on New York.

Back in those days we didn’t have the internet. Didn’t have the luxury of resources you have at your fingertips now. I already made a monthly pilgrimage to the comic book shop in Binghamton, New York, and, knowing how much my father liked reading, it didn’t take much convincing to swing over to the Oakdale mall and hit Walden Books. Selecting a few science fiction and fantasy books, I hurried home and began crafting letters to several publishers.

How could they say no? I had just won an award. Clearly my book was meant to become the next big thing. Licking the stamps and then the envelopes, I hurried out to the mailbox and raised the red flag. I was declaring war on the publishing world and wouldn’t stop until I had conquered it all. Days went by. I began to feel like Ralphie from the Christmas Story. A week. A month. Two. I don’t remember when in the process I started losing hope, but the weight settling over me as the realization that my book wasn’t good enough dawned.

Christian W. Freed was born in Buffalo, N.Y. more years ago than he would like to remember. After spending more than 20 years in the active duty US Army he has turned his talents to writing. Since retiring, he has gone on to publish 17 military fantasy and science fiction novels, as well as his memoirs from his time in Iraq and Afghanistan. His first published book (Hammers in the Wind) has been the #1 free book on Kindle 4 times and he holds a fancy certificate from the L Ron Hubbard Writers of the Future Contest.
Passionate about history, he combines his knowledge of the past with modern military tactics to create an engaging, quasi-realistic world for the readers. He graduated from Campbell University with a degree in history and is pursuing a Masters of Arts degree in Military History from Norwich University. He currently lives outside of Raleigh, N.C. and devotes his time to writing, his family, and their two Bernese Mountain Dogs. If you drive by you might just find him on the porch with a cigar in one hand and a pen in the other.
Website * Facebook * Twitter * Instagram * Bookbub * Amazon * Goodreads