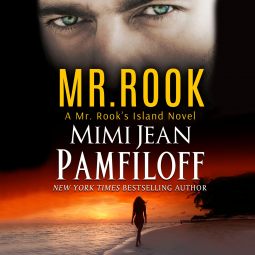 From NEW YORK TIMES Bestseller Mimi Jean Pamfiloff, Comes Part One of Mr. Rook’s Island, a Sexy, Dark, Romantic Suspense.~~~~~He’s Enigmatic, Dangerously Handsome, and COMPLETELY OFF-LIMITS…The women who vacation on Mr. Rook’s exclusive island are looking for one thing and one thing only: to have their wildest romantic fantasies come to life. Pirates, cowboys, billionaires—there’s nothing Rook’s staff can’t deliver.But when Stephanie Fitzgerald’s sister doesn’t return after her week in paradise, Stephanie will have to pose as a guest in order to dig for answers. Unfortunately, this means she’ll need to get close to the one thing on the island that’s not on the menu: the devastatingly handsome and intimidating Mr. Rook. And he’s not about to give the island’s secrets away.

Momma Says: 2 stars⭐⭐
Mr. Rook has a great premise, especially if you're of an age that you remember anything about the television show, Fantasy Island. That's what I thought of when I read the blurb, and I was excited to give this one a listen. Oh, yeah, I listened to the audiobook. I have the ebook and just hadn't gotten to it, and now that I've listened, that's probably a good thing because the narration by Lisa Zimmerman is the only reason the book got that second star.
Maybe it's just me - I'm certainly in the minority - but way too many things about this book just didn't work for me. Given the premise, I expected it to require a healthy dose of suspension of disbelief, but too many things went beyond even that. The reveal about Stephanie's sister, for example, was just eye-rollingly ridiculous. Even with that being Stephanie's focus, there is a surprising lack of actual investigation on her part. She's there to get to the bottom of her sister's disappearance, and she's sure Mr. Rook is the man with the answers, but she can't seem to keep her mind on anything but how sexy he is. The reveal about him was out there as well.
Let's see... we have an over-the-top story but really very little action. The bulk of the story takes place inside Stephanie's head, and I spent a lot of that bored out of mine. It's kind of all over the place and nothing of substance happens for way too long. Even the ending was just off in my opinion. I did like the twist with the three older ladies, but that had nothing to do with Stephanie or her sister. It was just a bit of interesting side story. I'll be honest, I'd rather have had more about those women.
Rather than going too far and giving spoilers, I'll stop there and finish with the one bright spot. Lisa Zimmerman's narration is the only reason I finished the book. She has one of those voices that's easy to listen to, and whether I liked Stephanie or not, Zimmerman captures the emotions of various scenes. Needless to say, I won't be continuing this series, but I will search out other books by this narrator, so this one wasn't a complete loss, I guess.