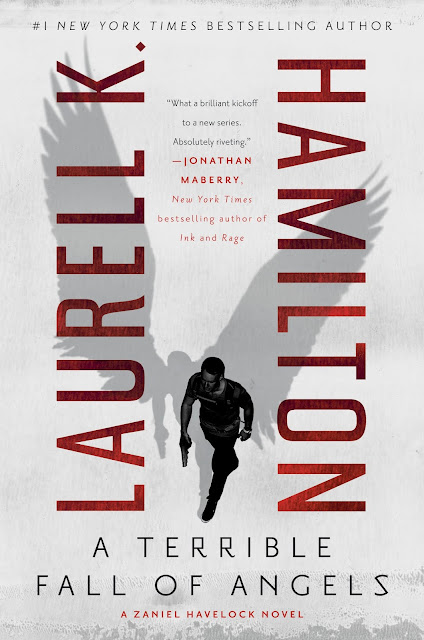 With more than 20 million books sold, Hamilton is one of the most successful paranormal fiction authors writing today. Known for the signature blend of chilling mystery, pulse-pounding action, and sizzling sensuality that has distinguished her Anita Blake, Vampire Hunter and Merry Gentry, Fey Detective series, Hamilton is recognized as one of the first authors to usher in a new era of popular speculative fiction that combines elements from multiple genres. Now she offers a fresh take on angel mythology by creating a world where angels, demons, and other supernatural creatures walk among humans.

A TERRIBLE FALL OF ANGELS introduces Detective Zaniel ‘Havoc’ Havelock, angel expert and member of the Metaphysical Coordination Unit, which investigates supernatural-related crimes. Zaniel is one of the team’s best assets because he has a direct connection to Heaven. Zaniel was an angel speaker, a human with the rare ability to see and receive messages from Celestial beings. He remains the only human ever to complete his training at the secretive College of Angels and then walk away from the calling.

When Zaniel is called to the murder scene of a college student, all signs point to a murderer from the angelic realm, but a cryptic message from an angel warns Zaniel that the killer is something else entirely. Something that not even the all-knowing angels have a name for. Now it’s up to Zaniel and his team to uncover what the murderer is—and how to stop it—before it can kill again. When Zaniel’s past begins catching up with him and old wounds reopen, he realizes that Heaven and the College don’t let go of their messengers easily.

As a fan of Laurell K Hamilton, I was pretty much guaranteed to read this first in a new series - but if I hadn't been, that title would've grabbed me. A Terrible Fall of Angels! Isn't that an attention-getter? The story has an attention-getting start to match with the main character, Zaniel, at a crime scene, and there are angel feathers! Rather than spill the book's secrets, I'll stop there and focus on the fundamentals.

One thing I've always liked about Hamilton is that her characters are relatable. I'm not saying that I can relate to Zaniel's job or talents, but his thoughts, his desires, his determination, those things are relatable. The story also has some interesting secondary characters that I hope to see more of as the series progresses.

I really like the premise for this series and the world the author is creating. That said, I do feel like the story is still finding its footing, so I'll be interested to see where things go from here. All in all, this first Zaniel Havelock book gives us an entertaining introduction to the character and his world. I'm not sure it's a storyline for everyone, but I enjoyed it.

Laurell K. Hamilton is the author of the #1 New York Times bestselling Anita Blake, Vampire Hunter series and the Merry Gentry, Fey Detective series. With more than 40 novels published and 20 million books sold, Laurell continues to create groundbreaking fiction inspired by her lifelong love of monster movies, ghost stories, mythology, folklore, and things that go bump in the night. She lives in St. Louis with her family. In her free time, Laurell trains Filipino martial arts with a specialization in blade work. Learn more online at laurellkhamilton.com.