How To Rope A Loyal Cowboy Tour and Giveaway 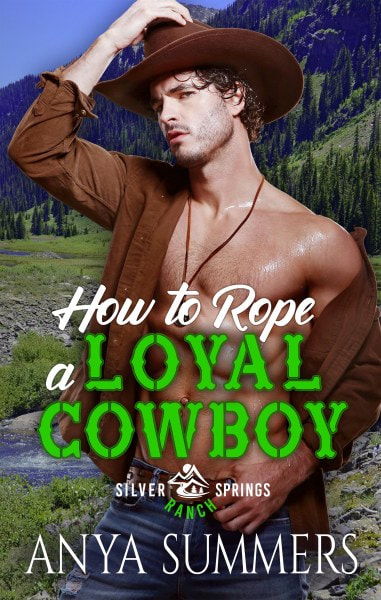 Widowed single dad Noah needs help in the worst way. He’s desperate to find a new live-in nanny to care for his four-year-old twins while he’s at work in the stables. Ever since his wife died, he has lived like a monk. What with raising two boys solo and working as the horse master for Silver Springs Ranch, there hasn’t been time in his life for things like finding a willing bed partner to slake his dark needs.
When the achingly beautiful Morgan appears on his doorstep inquiring about the job, he doesn’t think twice about hiring her. He snaps her up before she discovers his boys are little hellions who have driven the last few nannies away over their antics.
And yet, for the first time in three years, since he buried his heart in the ground, Noah is entranced by naughty visions of the new nanny. She’s young, full of enthusiasm, and stirs up every wicked fantasy in his arsenal.
He prays he has the fortitude to resist her delectable charms because she’s forbidden. At his age, he can’t sleep with, let alone crave, a woman fresh out of college. But she keeps casting sexy glances suffused with desire in his direction, battering his resolve to stay away. She’s headstrong, and he aches to exert his dominance.
Will he wave the white flag, and surrender to her naughty whispered pleas?

With the ad in hand and hope in her heart, Morgan climbed out of the dusky red seventy-eight truck she had inherited. It was the only thing the bank wasn’t taking, because it was fully paid off and not worth the cost of seizing it. Well, that and her clothes. But she had been forced to sell everything else. All the furniture in the house and gas station, her grandma’s wedding china and linens, the beds and mattresses, dining table and television… all of it, to pay off her pop’s debts. She’d been using a sleeping bag on the floor of her old bedroom for weeks now, trying to figure out her next step.

Morgan traversed the stairs, avoiding the bright yellow whiffle bat lying on one of the steps. It was early yet, but it was also a Sunday morning. She knew that Noah had Sundays off from working in the stables. She knew because she had called the stables to check when he would be in.

She had spent the few spare pennies she had left from working at the grocery store in town to get the dress she was wearing pressed at the cleaners, because she needed this job. She figured this dress, with its slim, elegant lines in navy blue that she had normally worn to church on Sundays, would make her look composed, and perhaps older than her twenty-three years.

Standing before the heavy dark walnut front door, she felt like she had gigantic frogs hopping around in her belly. Morgan had no idea why she was so nervous. She knew Noah. All her life, he had been coming into her pop’s gas station. But then again, she had always been fascinated by Noah, for as long as she could remember.

When she was a little girl, and he came into the station when she was there helping her pops out, he would tweak her nose or tug on her braid. And ever since high school, any time she saw him, he always made her skin feel three sizes too small.

He was older, wiser, and without a doubt one of the hottest guys she had ever seen. Not that she was going to let her hormones deter her from seeking a job with him.

Morgan rapped her knuckles on the door. She held her breath as she waited. From beyond the door, the sound of war whoops and stomping of little feet over hardwood resounded.

Noah opened the door. All her pent-up breath expelled in a rush. The man was sin personified. He looked disheveled, in a pair of jeans that were slung low around his waist— criminally low, as in, she was being treated to an unobstructed view of his defined obliques, along with the rest of his breathtakingly muscled chest covered by a smattering of dark hair. His bronze hair was ruffled, and stuck up in spots, like he had run his fingers through it a million times so far this morning.

A few days’ growth of dark scruff lined his firm, angular jaw. There was a dark-haired boy wrapped around each one of his calves—both stared up at her with bright blue eyes the color of the midday sky.

“Morgan? What are you doing here, sweetheart?” Chills suffused her at the deep bass tones in his voice. They always seemed to resonate in her chest—and further south.

At the confusion in his hazel eyes, framed by some of the longest lashes she had ever seen on a man, she pasted a smile on her face, and replied, “Answering your wanted ad in the paper.”