After her mother dies of an accidental overdose, Alex takes leave from her job as a writer for a Washington, DC, lifestyle magazine to return home to Maryland’s Eastern Shore. There, she joins her brother Owen, a study in failure-to-launch, in sorting out their mother’s whimsical and often self-destructive life.

Alex has proposed to her editor that while she is home she profile Juliette Sprigg, her former high school fling, owner of a wildly popular local restaurant, and celebrity chef in the making.

While working on the story and trying for a second chance with Juliette, Alex meets Carolyn Massey, editor of the town newspaper, and wonders if there’s more to life than reheating leftovers.

Enter Alex and Owen’s Aunt Johanna, who arrives from Seattle to help with arrangements. When Johanna reveals a family secret, Alex may have to accept her family for who they are rather than who she hoped they would be. And just maybe apply the same philosophy to her heart and herself.

Chapter One
Even though Owen never calls her, especially at 7:30 on a weekday evening, when Alex sees her brother’s name in the caller ID, she drops her phone back into her purse and waits for her metro stop. She figures he’ll just leave her a message about his cat. It’s been almost the entirety of their relationship the past five years. The week before, he’d texted her a picture of Tortoise, his Himalayan. She was wearing a suit of herbs with terra cotta-colored felt legs. She looked like a chia pet.

I am my own catnip receptacle, Owen had texted underneath Tortoise’s picture.

The chia pet text had come after midnight, a time when Alex (like most people) was asleep and susceptible to tragedy, like a call from the hospital, from the roadside after a car accident, or, for Alex specifically, a call from her mother when her mother was completely wasted, one glass of wine away from falling down the steps or worse, keeping Alex on the phone for hours about years-old, completely fabricated grievances.

She hadn’t responded to Owen that night, either, mad he’d woken her up about his stupid cat. That he didn’t understand she got up at five in the morning for her job as a features writer at the Capitol Metropolitan or that her apartment in Adams Morgan was expensive as hell or that the amount of her grad school loans equaled a house mortgage. That she had a life, didn’t still live at home with their mother, and didn’t have a cat for a best friend.

As she gets up to make her way to the doors of the metro, her phone vibrates again.

“Owen, I just got off work—can I call you back?” She presses the phone to her cheek as she follows the other commuters up the stairs of the station.

“You know—I was just thinking about Tortoise—I was worried maybe it meant she had died or something,” Alex jokes, cutting him off, even as her hands begin to sweat. She wonders what their mother has done this time to warrant a call from Owen.

“Dammit, Owen, you shouldn’t joke.” But she knows he isn’t joking. She stops in the middle of the sidewalk. People brush against her, clipping her leg with their totes, her shoulder with their purses and messenger bags, as she tries to remember what day it is again, when she talked to her mother last. What she wishes she could take back.

“You should come home.” Owen’s words have awkward pauses between them, as if he’s too choked up to speak. “Can you come home tonight?”

“What do you mean, you can’t?” She imagines Owen’s face on the other end of the line, scrunched like a balled-up tissue. “Mom’s dead. What’s wrong with you?”

“You’re right—all right, okay,” she hears herself agree, her voice far away and warbled, like she’s in a dream.

As she wanders from the Woodley Park metro station toward the general direction of her apartment, she feels suddenly like an alien life form. I am experiencing a tragic event, she wants to tell the dog walker with five French bulldogs who passes her or the woman jogger who pauses at the intersection, drinking from a clear pink plastic water bottle. She wants to grab on to someone, anyone, like a body snatcher, and switch places, away from the kettle ball in her chest, away her knotted intestines and her numb appendages.

Alex has never really done death before. She’s thirty-six and never met her grandparents; their father left when she was four. And although their mother had turned sixty a few years back, it was more like Madonna sixty than Medicare sixty. Were Alex and Owen supposed to call Aunt Johanna, other forgotten, faraway relatives in Wisconsin and Arizona, their father, wherever he was? Was some kind of funeral needed for a mother who had flitted between atheism, Wiccan, new age-y crap, and pharmaceuticals like she was at a metaphysics salad bar?

And beyond the details, which Alex is good at, what about the other, more feely things? Like the way her mother had made her feel? (Incidentally, like a neon sign, a composition of gasses and other toxic compounds compressed into a fragile glass tube that she has managed to bend into the words Alex Maas, Successful Person Who Does Not Give a Fuck.)

Except now she has to give one.

“Crap,” she says under breath as she waits for the elevator in the lobby of her building. She brings up her ex Kate’s number in her phone doesn’t press call, not only because she can’t talk to Kate anymore, but because she realizes she can’t talk to anybody. If she opens her mouth and voices the words my mom is dead, she knows any adrenaline humming through her from the shock will dissolve, adrenaline she needs to get into her apartment, throw a few days’ worth of clothes together, call Rowan at the magazine, and get to the Greyhound terminal at Union Station to catch a bus home early the next morning.

Did Owen even mention how she died? In her apartment vestibule, Alex digs her phone out again. She can’t remember how they ended the conversation, anything he had said after the words dead and come home.

“I’m so sorry.” Rowan, her boss, sounds like he’s outside. “Are you all right? Is there anything I can do?”

“No—but thanks,” Alex says as she walks in a circle in her bedroom, staring at her opened suitcase. “I just don’t know…I don’t know how much time I’ll need. A few days? I don’t know what’s supposed to happen—she always talked about being cremated. But it’s not like she wrote a will—she didn’t even believe in grocery lists.”

“But if you need anything, you’ll call, right?” he prods, as if they’re friends. Maybe, in some way, because she spends most of her time with him, most of her time at the office in general, he’s her friend. It’s not like she has many, anyway. Her fingers shake as she opens her underwear drawer.

“Yes, of course. I’m going to get off the phone, though, before I cry.”

“Sure, sure. Although you can cry on the phone—it’s okay.”

“Oh—I might need more time on the ballet company story. Can you give it to me?”

“Don’t worry about the story, Alex—we’ll find something else to run.”

She hears one of Rowan’s kids—his little girl—talking excitedly in the background. Then she thinks about the other person she had wanted to call after she got off the phone with Owen. The only person she’s ever been able to tell anything.

“Hey,” Alex says casually, as if she’s just thought of it. “What about Juliette Sprigg—didn’t you want someone to interview her?”

“You mean the profile about her restaurant? I thought someone else would cover that.”

“Yeah, but…” Alex moves into the bathroom, just in case she might throw up. “Sprigg Restaurant’s, like, five minutes from my mom’s house. I went to high school with Juliette.”

“No, it’s okay—I can take it. I want to do it.” She knows Rowan will give in—he has before—four magazine awards for her stories will do that. “Can you e-mail me her contact information?”

“Jesus, Rowan—are you really saying no?” Her voice rises, like helium, up an octave. “After all I’ve done for the magazine?”

“Alex,” he sounds defeated, like he’s speaking to his now-crying little girl. “Your mother just died.”

“Fine—I quit then.” She hangs up on him and turns on the faucet in the bathroom. As she splashes her face with water, her phone beeps. She hits the speaker with her wet hand as she reaches for the towel. “What?”

“You’re not quitting, and I’m not assigning you the story.”

She takes a breath and holds it a second before exhaling. “I’m doing the story, or I quit.”

“Hi, honey, what sweetie? Will you stop screaming? Daddy can’t understand what you want if you’re screaming.”

Suddenly there’s silence, and Alex wonders if Rowan has hung up on her this time.

“Rowan, are you there?” she whispers, her neck so tight her head pop off.

“Sorry, Alex, I’m just having some, uh—you know what? Fine, do the story. Only because I have to get off the phone. I’ll e-mail you the info of the editor at the newspaper down there—really nice woman. She paired us up with a local photographer when we did that feature on that horse whisperer guy.”

“Great.” Alex exhales and dabs tears out of her eyes as she sits on the toilet lid.

“I’ll be fine—it’s how I get through things.” It’s been how she’s been getting over Kate all these months. And now she’s offered, at the supposedly worst time of her life, to interview Juliette freaking Sprigg too.

As she hangs up, her stomach pushes up into her esophagus like peasants storming the Bastille. She sets her phone on the edge of the tub and wraps her arms under her knees, head on her lap, like people in the airplane safety cards do, and focuses on her breathing. Remain calm. Remain seated. Brace for impact. 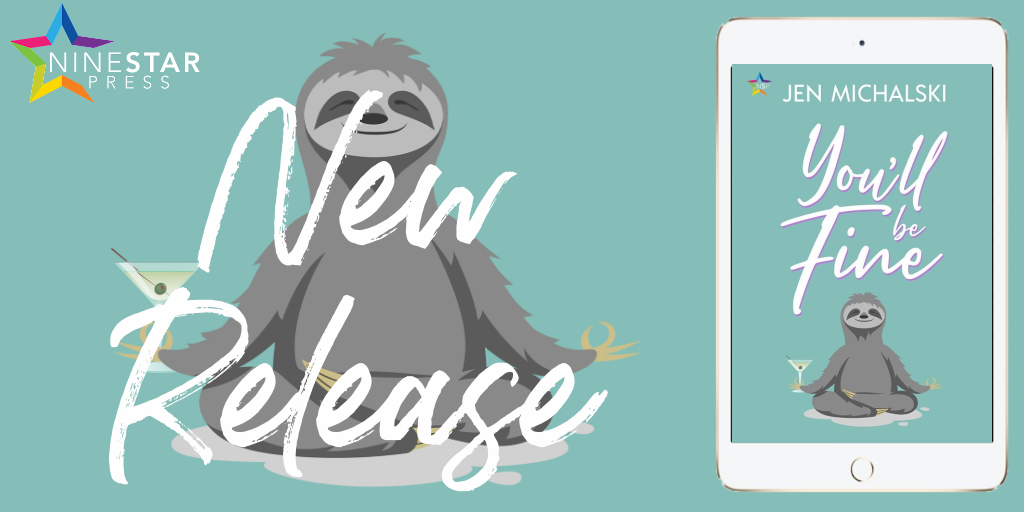 Jen Michalski is the author of three novels, The Summer She Was Under Water, The Tide King (both from Black Lawrence Press), and You’ll Be Fine (NineStar Press), a couplet of novellas, Could You Be With Her Now (Dzanc Books), and three collections of fiction (The Company of Strangers,From Here, and Close Encounters). Her work has appeared in more than 100 publications, including Poets & Writers, The Washington Post, and the Literary Hub, and she’s been nominated for the Pushcart Prize six times. She’s also the editor of the online literary weekly jmww.