Series: After Everything, Book One

Captain Mike Kelley does not ignore his intuition, so when sexy bartender Will Hayes captures his heart, Mike embarks on a mission to win him over to a Domestic Discipline relationship. Will accepts with one caveat: Mike must promise not to renew his army contract. Mike agrees, until the army invokes the stop-loss military policy to involuntarily extend his commission and send him back overseas, rendering him powerless and threatening everything he and Will have built. Will, left alone to cope with a new café, must rely on the support of old friends who may no longer be trustworthy. A horrific terrorist attack on Mike’s outpost changes everything, leaving them both at a loss. Mike awakens in a hospital with a devastating injury and no recollection of the attack. As the only survivor, his memory may be the key to national security. Mike struggles to cope with his injury and Will struggles with his new role in Mike’s life. For Mike and Will, “No Flag” meant “come home alive.” Will has Mike back rather than a folded flag, but in the aftermath of war, can they rebuild the life they had before?

Mike set the phone on the receiver after hanging up with Will. “Thank you,” he told the nurse, Cathy, who placed it on the bedside table.

Cathy patted his right shoulder and smiled. “You’re a hero, Mike. You should be proud.”

Mike did not feel like a hero. At that moment, he felt pathetic. He couldn’t so much as roll over in bed by himself. What, or who, did he save? Not the twenty men and women who’d lost their lives. Hell, he didn’t even remember what he had been doing, besides sending an email, when the explosions had gone off. What did the email say? Was it important? Mike couldn’t remember. It was not worth Major Becky Evans losing her head, Mike knew that much for sure. He’d browsed through the pictures online from the hospital in Germany on a borrowed computer, but he didn’t have one now. Which in a way was a relief. He felt compelled to investigate the documentation, see what he’d survived. Yeah, Mike was one of the lucky ones. New definition of lucky, but true nonetheless.

“Cathy? Am I maxed out on morphine?” he asked two hours after making the call.

“For another hour, yes,” she replied apologetically. “May I get you something to drink?”

Mike cracked a smile. “Any chance of a beer?”

She returned the smile. “Ah, that would cost you the morphine.”

“Not a good trade.” Mike attempted a laugh, but the pain from his stitches cut it off.

“Haggling for booze already?” Will asked from the doorway.

Relief flooded Mike, not only at the sound of his husband’s voice, but the fact that Will had a few extra seconds of not knowing how broken he was. “Trying. Wasn’t worth giving up the morphine though.”

“Well, not for beer. Maybe absinthe would take away the pain or provide some fun side effects.” Will strode into the hospital room.

“My name is Cathy. You must be Will.” The nurse shook his hand before he could reach the bed.

“Yes, thank you for taking care of my husband until I could get here. I swear he’s not an alcoholic.”

“It’s always a pleasure helping our servicemen and women.”

Will smiled at her, but caught Mike’s eye, so he knew it was for him. “Mike? A pleasure when he’s sick or injured? Now I must know what he’s on. There has to be a way to put it in his coffee every morning.”

“Sorry, morphine is a controlled substance. I’ll let you two talk. If you need me, I’ll be at the nurses’ station.” Cathy left the room and shut the door.

Mike extended his hand and pulled Will toward him. “Hi, you.”

Will kissed his forehead and then his lips. “Hey. When can I spring you?”

“You didn’t ask what happened.” Actually, Will had not taken his eyes off Mike’s face.

Will nodded. “My husband came home injured from Afghanistan. I don’t need any other information to know I’d rather have him out of the hospital and in our bed.”

“But without knowing why I’m in the hospital, you can’t understand what that would involve.” Mike scrutinized him, searching for Will’s true feelings, but he didn’t seem to be masking anything.

A wave of fire-infused daggers sliced through Mike’s left arm. No amount of rationalization that he did not have a left arm lessened the pain. “Fuck!”

Will squeezed his hand and waited for the episode to pass. “What hurts?”

Mike met his gaze as Will wiped his tears. “My nonexistent left arm.”

Will glanced at that side of his body for the first time since he entered the room. “And how do they treat pain of something not there?”

“Immediately, yes. We have to solve that problem before we can discuss long-term solutions.”

Mike closed his eyes. “That wasn’t how I planned to tell you.”

“No? Were you going to draw up a contract?” Mike laugh-coughed, and Will hugged him carefully. “Does it hurt to touch your left side?”

“Um, it doesn’t tickle, but I’ve had worse pain. The burns are healing, not pretty though,” Mike explained and then asked, “What time is it?”

Will checked his phone. “One-thirty. Do they kick me out?”

Mike thought about the right answer: Go to a hotel and sleep. Stop by tomorrow. “No, please stay.”

“I was hoping you’d say that.” Will kissed the back of his hand.

Actually, this is the definition of lucky. 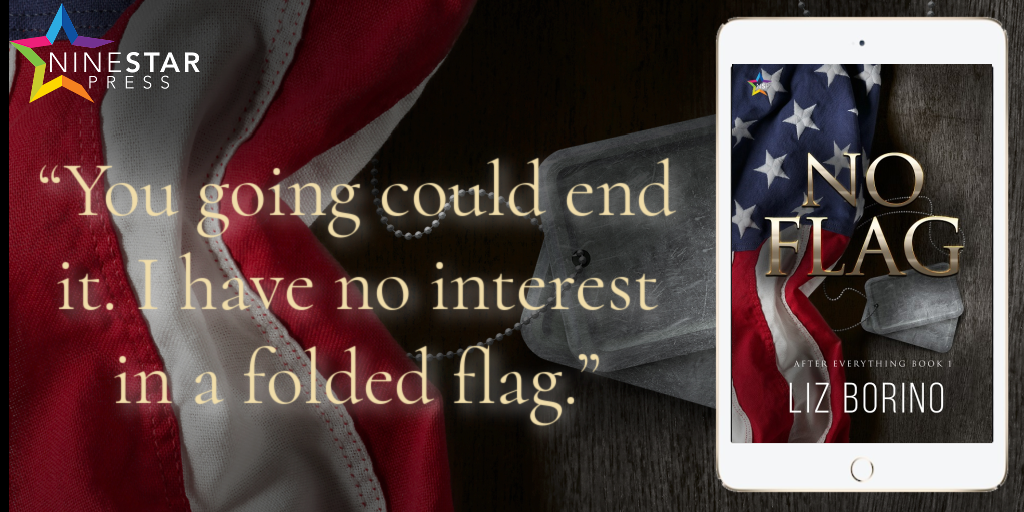 Liz Borino has been telling stories of varying truthfulness since she was a child. As an adult, she keeps the fiction on the page. She writes stories of human connection and intimacy, in all their forms. Her books feature flawed men who often risk everything for their love. When Liz isn’t writing, she’s waking up early to edit, travel, and explore historic prisons and insane asylums—not (usually) all in one day. Liz lives in Philadelphia with her two cats.