The Lady and the Texan by Bobbi Smith Blurb Blitz 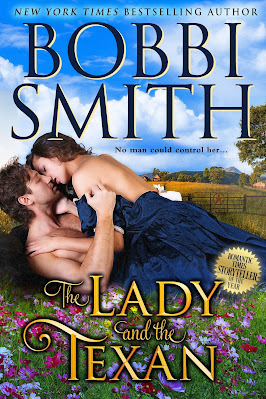 A firebrand since the day she was born, Amanda Taylor always stood up for what she believed in. Growing up in Texas, she could ride and shoot with the best of the boys before being sent back East for a more refined education. A firm believer in women’s rights, she was not going to let any man control her—especially a man like the rough-and-ready gunslinger Jack Logan, who had been sent by her father to escort her safely back to Texas.

After a deadly run-in with the infamous El Diablo, Jack Logan left the Texas Rangers, no longer able to trust his instincts—or any woman. He knew Dan Taylor’s daughter was trouble, and yet her defiant spirit only spurred his hunger for her. Jack discovered that keeping the dark-haired tigress at bay was a lot harder than outsmarting the outlaws who were after him—and surrendering to the sweet fury in her arms was a heck of a lot riskier.

Dinner was being served on the riverboat, yet Amanda and Eileen hadn’t heard from Jack since he’d left them in a strange mood that morning

“You wait here in the cabin in case he shows up. I’ll go see if I can find him,” Amanda said.

Her first instinct told her he’d probably gotten involved in a poker game and forgotten about them. As she neared the door to the saloon, a steward came out.

Amanda went to stand at the rail. When Jack didn’t come out right away, she began to worry, for it was growing dark. She started back inside just as Jack walked out.

“Why, if it isn’t Miss Amanda Taylor, standing out here in the moonlight,” Jack said.

“Yes, I have.” His words were slurred as he crossed the distance between them.

“Are you wishing you had your axe right now?”

She turned to walk away, but he caught her by the wrist. Jack stared down at Amanda, seeing the beautiful face that had haunted him all day.

“I don’t understand why you want to be so much like a man. As lovely as you are, you could have all the men in the world begging for your favors…”

“I want to be strong, so I don’t have to put up with men like you!” She tried to twist free of his grip.

Her defiance sparked something in Jack.

“You should be more feminine.” He drew her close.

Amanda knew she should resist him, but she hesitated. In that moment, Jack sought her lips in a tender caress.

Amanda was frightened, yet breathless. Jack’s kiss was a sensation unlike anything she’d ever known before. It was gentle, yet powerful. Demanding, yet tantalizing.

He pulled her closer, and she fit perfectly in his arms. He deepened the embrace, parting her lips to taste of her sweetness.

After working as a department manager for Famous-Barr, and briefly as a clerk at a bookstore,

Bobbi gave up on career security and began writing. She sold her first book to Zebra in 1982.

Since then, Bobbi has written over 40 books and 6 novellas. To date, there are more than five

million copies of her novels in print. She has been awarded the prestigious Romantic Times

Storyteller Award and two Career Achievement Awards. Her books have appeared on the New

The rights to Ms. Smith’s books have been sold to China, France, Germany, India, Israel,

a Rafflecopter giveaway
at September 24, 2021