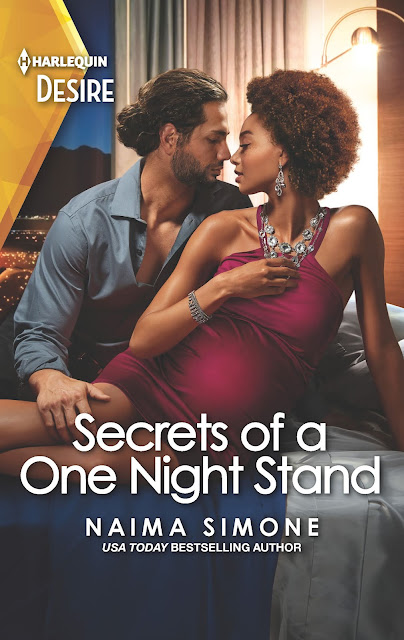 She said yes to one night with a stranger… Now she’s pregnant and that stranger is her boss! Only in this Billionaires of Boston romance from USA TODAY bestselling author Naima Simone.

She told herself it was one night. Nothing more.

But her heart knew the truth…

Finding out her previous one-night fling is her new boss is the shock of Mycah Hill’s lifetime. She can’t say no to being VP for software CEO Achilles Farrell—she’s finally made her career dream come true. But knowing he’s so close… It’s only a matter of time before she’s back in his arms. It can’t end well. Achilles’s tortured family history means he’s not up for sticking around long-term. But Mycah’s surprise pregnancy is about to change everything…

Add Secrets of a One Night Stand to your Goodreads!

Buy Secrets of a One Night Stand by Naima Simone

Momma Says: 4 stars⭐⭐⭐⭐
First, I just love this cover. This would be one of those books I'd pick up because the cover caught my eye. Then, I get past the cover and find out it's a surprise pregnancy romance. Oh, wait! A surprise pregnant by the billionaire romance, and it starts with a one-night stand. Yeah, I'd say this one covers a variety of tropes, all of them delicious. The one-night stand then find out you're working together in some capacity isn't new by any means, so a lot depends on how it's executed. Naima Simone does that quite well along with giving us a couple that has an almost magnetic attraction between them. The story is fast-paced and engaging, it's a sexy romance with interesting characters, and it's easily read in an afternoon or even a before bed romance to send you off to sleep with a smile.
🞿🞿🞿🞿🞿

He propped his elbows on the bar top and ground his thumb and forefinger into his eyes. What he wouldn’t give to be back in Tacoma, Washington, in his cabin less than a mile from the Cascade Range. So far away from affluent Beacon Hill, Massachusetts. And not just in location.

But as he’d stood in that mansion’s ridiculously huge library with its hardwood floor, leather furniture, fireplaces large enough for even him to stand in, spiral staircase and floor-to-ceiling bookshelves, it hadn’t been just his black thermal shirt, faded jeans and battered brown boots that had differentiated him from the other men in the room.

Cain Farrell—his older brother, the heir, the son Barron Farrell had kept and acknowledged. Kenan Rhodes—the youngest son, biracial and the other bastard besides Achilles. But both men hailed from the same world. Boston’s elite. It was in the razor-sharp yet elegant cut of their suits. The cultured speech. The arrogant demeanor.

Achilles had encountered people like them. And had ended up despising every one of them.

Now he had to call them brother.

Life should really offer him a cigarette when it decided to fuck him.

“You starting a tab or paying for these now?” The bartender set a mug filled with dark, cold brew topped with a creamy head that spilled a little over the rim. Next to it sat a short, smooth glass of amber whiskey.

“A tab.” Because yeah, he was just getting started. The whole purpose of this trip entailed not thinking. And several rounds should accomplish his mission.

She cocked her head, running a dark blue gaze down his frame. He’d hit six foot his sophomore year of high school and had kept growing. He’d become used to that glint in a woman’s eyes. And he didn’t shy from it. The only thing better than losing himself in alcohol was hot, dirty, nameless sex.

His height, his build and his eyes—those were the only things his worthless sperm donor had passed down to him, and women seemed to eat that shit up. He picked up the shot of Jameson and knocked it back, never breaking visual contact with the pretty brunette. The corner of her lips lifted, desire flickering in her gaze as it dipped to his mouth.

“Let me know if you need to order food. Y’know, to balance all that alcohol. Can’t have you too wasted just in case you have later…plans.” She smirked before sauntering off to the other end of the bar.

Like a fire beating back the coldest winter winds.

As silken and sexy as skin sliding over bare, heated skin.

As jarring as crashing cymbals directly in the ear.

He longed to curl up against it, roll around in it.

He wanted to snarl at it, hurl himself away from it.

His heart smashed against his rib cage like a caged beast. His pulse, in sharp contrast, a sonorous warning at the base of his throat. Something primitive inside him warned that he should go find that bartender with the invitation in her eyes, pay for his drinks and get the hell out.

But the impulsive, destructive streak that had brought him to Massachusetts must have still been alive and kicking because he didn’t heed that warning. Instead, he slowly turned around on his barstool.

USA Today Bestselling author Naima Simone's love of romance was first stirred by Johanna Lindsey and Nora Roberts years ago. Well not that many. She is only eighteen...ish. Published since 2009, she spends her days writing sizzling romances with heart, a touch of humor and snark.

She is wife to Superman--or his non-Kryptonian equivalent--and mother to the most awesome kids ever. They live in perfect, sometimes domestically-challenged bliss in the southern US.