Damned and Confused Blitz and Giveaway 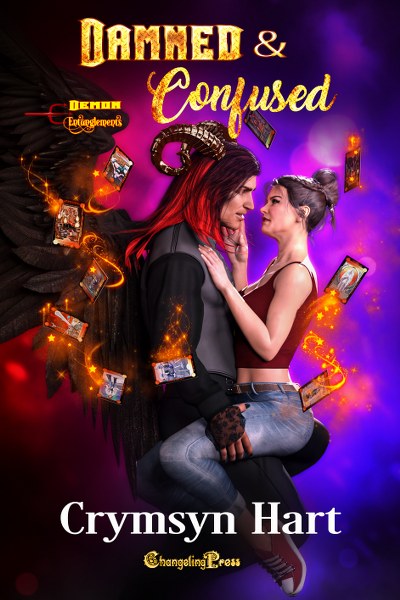 Meriel discovers an ancient deck of Tarot cards while cleaning out an old house for her sister. When she opens the box of cards, out pops Wile, a demon hell-bent on protecting her from Raziel, a Prince of Hell.

If Raziel gets the cards and Meriel, he can open a portal to release the devil into the world. Together, Wile and Meriel have to stay one step ahead of Raziel.

The Tarot start to teach her their secrets and help her understand her deepening connection to Wile. Can she learn what she needs to in order to keep the devil at bay and save her demon?

Meriel ran her fingers through her hair and stared at the mess of boxes she had to contend with. Sunlight streamed in through the cobwebbed windows, highlighting the dust she’d stirred by setting foot in the attic. She gathered her hair, twisted it into a bun, and thrust a pen through it. A piece came loose and draped in front of her eyes. She stuck it behind her ear and groaned as she looked at the list of things her sister, Kendra, had left for her to do. Two pages of tasks to get the house cleared out. Kendra had taken over their mother’s cleaning business once she had retired. Since Meriel was out of a job, Kendra had enlisted her to work. The money paid Meriel’s bills, but the work never seemed to end. Meriel knew because she’d worked with her their mother long before Kendra came along. Her little sister never had it as demanding as Meriel did growing up.

Better get to it. She gazed around the attic. Antique furniture piled next to trunks was shoved into the corner. An old sewing machine, a mannequin dummy, and numerous old cardboard boxes waited for her to dig through them. Whatever was written on the side to describe the contents had faded with time. She wiped her hand across her head from the sweat forming on her brow. It was only nine and already the attic was stifling.

Meriel ripped open the first box and found nothing more than old photos, china, and other knickknacks. She moved the box aside and started a pile of things they could sell. She kept on going and got lost in the monotony of pulling boxes and figuring out which things to trash and what could be sold.

By the time she got half the attic sorted, the mound to be tossed far outweighed the pitiful heap of what they could keep. She stopped and took a bottle of water from the cooler. The liquid slipped down her throat, then she ran the perspiring bottle over her forehead and enjoyed the coolness of the water on her skin. She grabbed a box from the trash pile and ventured down to the first floor. She set it down by the front door.

Meriel peered through the dusty window. The breeze had picked up greatly since she had gotten there. She opened the door to get a better look at the sky. A boom of thunder greeted her. A bolt of lightning arced overhead as dark clouds approached the house. An ominous feeling settled over her as she stared at the coming tempest. Her yellow Ford Focus looked like an ant waiting to be squashed by the encroaching storm. Her side vibrated. She dug her phone out of her pocket and saw a tornado warning had been issued for her area.

Metallic pings caught her attention and drew her gaze to her car. Pea-size balls of ice bounced off the hood of her car. Dread crept up her spine as the gale grew bigger. Perfect, I’m stuck in a big creepy house in the middle of a storm. Another boom of thunder and a gush of wind struck. The rain mixed with the hail hit her face, stinging sharply. The clouds had moved in faster than she anticipated. Darkness engulfed the house until it felt like night had fallen. The clouds had taken on a purple-black hue with a tinge of orange mixed in. She heard a crunch. Hail the size of grapefruit had hit her windshield and fell on the roof of her car before rolling off onto the cracked driveway.

Meriel slammed the front door shut. The next roll of thunder shook the house. Sounds like God is doing construction up there. She tried the light switch, but the power flickered and went out. She checked the radar on her weather app. It showed a red and orange blob coming straight at her location. The way the building quaked and with the pounding hail crashing against the house, she wasn’t going to take a chance. Using the flashlight on her phone, she rushed into the kitchen, hoping to find the basement door. Meriel hadn’t explored much of the house except to find the bathroom and the attic. The kitchen appliances were large and from the late 1940s. She pulled open a door by the fridge. A pantry with a few old jars on the shelves. A squeak made her jump as several mice scampered out of the way.

A loud bang overhead didn’t make her feel any better. She heard a soft click and then a creak. Meriel followed the sound and discovered a door in the hallway she had passed by. It blended with the wall so well she didn’t even realize it was there. Stairs led down into the darkness. Her flashlight flickered on and off. Thunder rattled the windows and made her head into the cellar for safety. Rushing wind and pelting rain battered the windows.

The light from her phone let her see the basement filled with more discarded antiques. Besides the collection of antiques, there were shelves of canned goods covered with cobwebs. The cellar fit every stereotype of what a scary basement should be. Spiders hung from their webs. Broken furniture was scattered around. Shelves of canned goods so old the labels had worn off filled one wall. All she needed now was a ghost to pop out and say boo. She glanced at her phone. Great. No signal.

As she moved farther into the basement, she heard water dripping. It led her to another room with a dirt floor. Thick wooden beams supported the floor above. Inside, she found an old well. In the old days, people used to build wells inside the houses. She had never come across it before, though. The sound of the storm didn’t seem as bad. Something about the place didn’t feel right. Water plopped onto her hand. She panned her flashlight around the basement and discovered a wooden door. I wonder where this goes? Let’s find out. 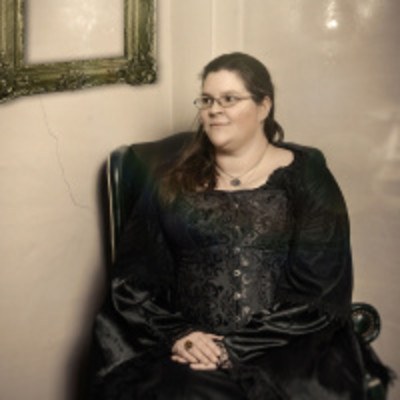 Crymsyn Hart is a National Bestselling author of over eighty paranormal romance and horror novels. Her experiences as a psychic and ghostly encounters have given her a lot of material to use in her books. Vampires, grim reapers, shifters, and other paranormal creatures tend to end up in her books no matter how hard she tries to keep them away.

She currently resides in Charlotte, NC with her hubby and her three dogs. If she's not writing, she's curled up with the dogs watching a good horror movie or off with friends.

To find out more about Crymsyn, check out her website on: www.crymsynhart.com