Adam Marsland has a plan.

He’s been managing the Braided Crop Ranch for six years and wants to bring everybody he can find back for a week of games, competition, and celebration.

Henry Swift was a ponyboy at the BCR during its very first year. He learned to trot, pull a cart, and submit to his trainer. He’s never quite left the experience behind and is excited to receive Adam’s invitation to return.

But it’s not only the Ranch and its sex-positive atmosphere pulling Henry back to the seclusion of the Muskoka wilderness.

Ever since their first frantic and lustful encounter in the woods, Henry’s had a thing for Adam Marsland and his memories of his tumultuous time on the ranch have haunted him for years. Adam’s still at the ranch, and now Henry can go back and discover if the older man has any regret for the way things turned out in the past.

But the gymkhana Adam’s planning means the return of a plethora of ponyboys and trainers and Henry wonders if he will have trouble reminding Adam how much they wanted to be together back then, and how possible it might be for them now, in the midst of the excitement and testosterone.

No one ever said love was easy, but Henry is determined to make the most of his chance.

“So, Adam, what do you think?” Kamal asked, stepping back so Adam Marsland could see the Braided Crop Ranch’s very first ponyboy decked out in the gear they had chosen together.

I was that ponyboy.

My name is Henry, and I remember that day with the clarity of an unexpected revelation.

I had come to the Braided Crop Ranch to explore the world of pony play in an immersive environment. The BCR’s advertising had been so professional and the website so comprehensive I’d thought the place had been operating for years. I hadn’t realized I’d be one of the first men to experience its unique business model.

Until Adam Marsland had phoned to make sure I’d be okay with being a guinea pig of sorts—one of three men under the BCR’s three trainers—to make sure the gear and protocols they’d established would work.

The Braided Crop Ranch took pony play and exhibitionism to the next level. A place where queer men could kink out in pony gear, work under a qualified trainer, and perform in pony shows for paying guest members, the BCR provided sex-positive people with a veritable playground of possibilities.

Adam had been professional and friendly on the phone, his voice a soothing tenor, immediately putting me at ease and giving me the reassurance that whatever happened, the BCR was run by people experienced in the world of kink and pet play. When I met him in person, I’d been smitten with his movie-star good looks, his capable manners, and his prim and proper style.

After putting me in harness, tail, and bridle for the first time, Kamal Salib had marched me to the back porch at the main house and called Adam out of his office to have a look. Upon seeing a fully outfitted ponyboy for the first time, Adam had been silent, nodding assent to Kamal’s words about how the gear they’d ordered worked perfectly and how excited he was to get started with my training, while I trembled with excitement at finally being able to explore my fetish with men who obviously understood.

Then Adam had come down the porch steps and stood right in front of me, his gaze holding mine as he reached to touch the metal ring of the bridle on my cheek with a steady, calming hand.

“He’s excited. His cock is ready to bust out of that jock. I think we need to consider cages instead.”

Adam’s eyes widened as I almost combusted from that suggestion. Because wouldn’t a cock cage make this experience even more humbling? Then Kamal told me to keep my eyes down like a good ponyboy, and I’d had to break away from Adam’s intense gaze.

“Worth it.” Kamal smiled.

Then Adam let his hand slide over my chin and down my throat, over the leather collar and the chest straps of the harness, down my torso and belly to the rust-red hair that brushed the top of the jock. “You had to put a ginger in the gear first, didn’t you? Is this Henry?”

I held my breath as my eyes closed at Adam’s tender touch and his lips saying my name.

“Yes. The others are in the arena. But I had to bring Henry for you to see.”

“He’s exquisite, Kamal. Do they all look like this?”

“More or less. But Henry’s the sexiest in my opinion.”

I felt a young man’s pride at that assessment and stood taller.

Adam nodded, and then his hand was gone. “I’ll consider the cages. Good idea.”

I stared at the ground as Kamal asked, “You still partial to redheads, Adam?”

“You know me too well, Kamal,” he said before turning and walking back up the porch steps. “Take him to the arena.”

“Yes, Boss. But come and watch him trot later, will you? I’m sure he’ll want to show off.”

I heard the door shut as Adam went into the house. Kamal laid his hand on my belly and rubbed the defined muscle there.

“Pretty sure the ranch boss has a massive hard-on right now,” he said. “I think he likes you.”

I made a sound in my throat and tossed my head, jingling the bit and relishing the realism of my predicament.

Kamal gathered my reins and led me across the grass. “We have a lot of work to do, Henry.” 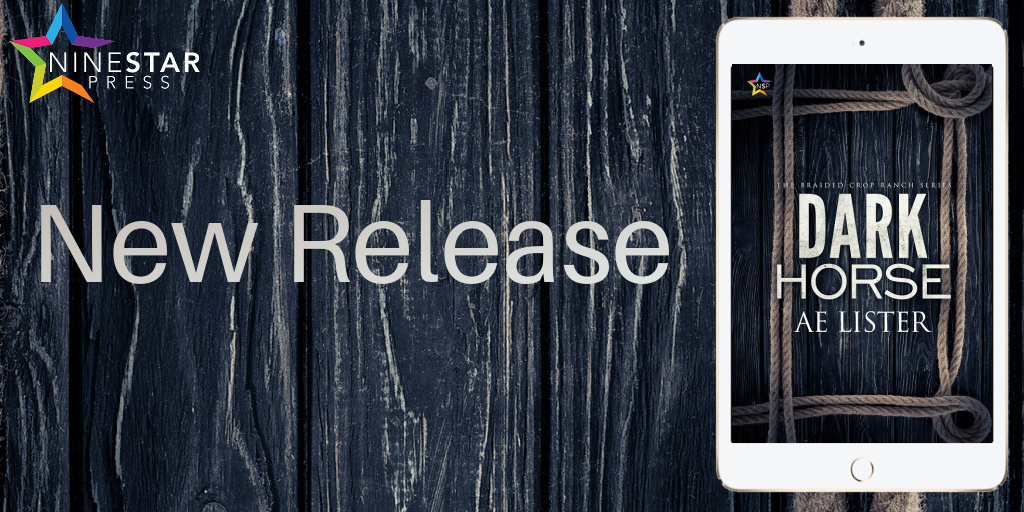 AE Lister/Elizabeth Lister is a Canadian non-binary author with a vivid imagination and a head full of unique and interesting characters. They have published many other books, one of which (Beyond the Edge) received an Honorable Mention from the National Leather Association–International for excellence in SM/Leather/Fetish writing.